I want to thank all the people who ever posted their Tiramisu recipes on the internet
because I think I read all of them, looking for exactly what I wanted to make.
I didn't find it, but I got inspired.
In my "research"
I learned that Traditional Tiramisu calls for delicate little finger cakes called Ladyfingers
which are delicious, but not always available at my usual grocery stores.
It also contains a heavenly filling using Mascarpone cheese, a sweet, light creamy cheese,
and sometimes rum and coffee flavors.

I had recently made a Mascarpone Frosting for another dessert
and wanted to try it in a Tiramisu.

I had a yellow cake mix on hand.
And chocolate liquor.
And Instant coffee.
Voila! 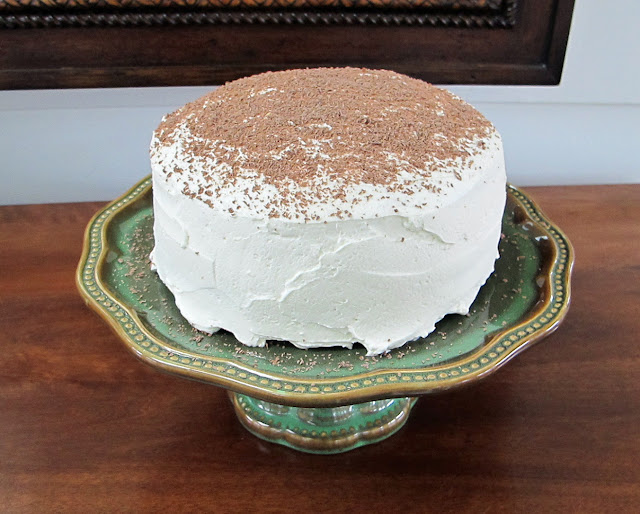 I made the yellow cake according to the package directions.

Then I mixed a heaping Tablespoon of instant coffee into a Tablespoon of boiling water.
I added the coffee mixture to 3/4 cup of chocolate liquor.

After the layers had cooled completely,
I frosted the cake with the mascarpone frosting (recipe follows)
and shaved a chocolate candy bar over the top. 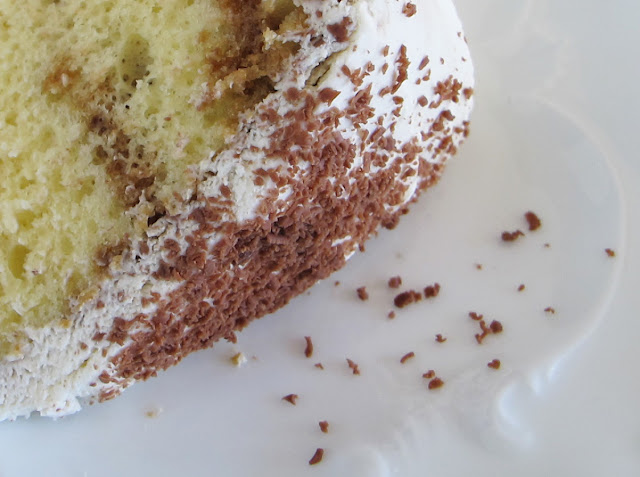 Here's how to make the frosting:

Mix all ingredients together in a medium bowl
and beat with an electric mixer about 4 or 5 minutes,
until it has a frosting like consistancy and forms stiff peaks.

This frosting is so easy to make
and is lighter than cream cheese frosting, and less tangy,
so it would work on a lot of cakes where cream cheese icing might not.

It has a great consistancy for piping, too.
And it's so good.

Here's a slice of heaven! 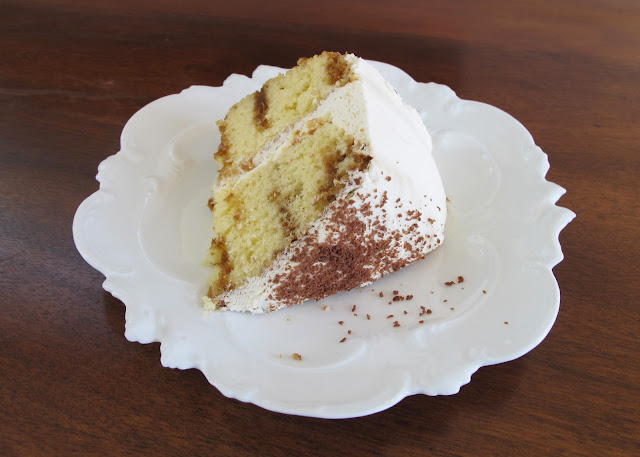 Doesn't it look pretty on my Mom's gorgeous Limoge plates?

One of my most cherished recipes is from my Mom,
for a Chocolate Heath Bar Trifle.
She didn't bake much- she was busy decorating and collecting.
You can read about her here.
The recipe is handwritten by her and she mailed it to me years ago.

They say Brass is back.
You can read all about it here at Sand and Sisal...

I sure hope so.
Our house is an 80 year old Center Hall Colonial
with the original brass hardware and fixtures.
We bought it in the eighties when shiny brass was king.

Imagine our horror as we watched home fashions change-
chrome replaced brass
and then brushed nickel came long and then oil rubbed bronze....
our poor house was hopelessly out of style.

But what is a "purist" homeowner to do?
Every change we've made to this house has been made with one goal in mind-
What would have been done when the home was built?
What would the material have been?
What would be true to the period the home was designed in?
Replacing good, solid, original hardware
to keep up with home fashion trends was out of the question.
And so we never did.

We have recently been doing some spring sprucing up around here.
It started with our son's bedroom,
and then it began "snowballing" into hallways and down the stairs and into other rooms...
Much has begun to happen, but little has been finished...

One bright spot has been the happy restoration of the brass hardware on the doors.
Our painter and all around house magician, Dan, took it upon himself to polish a door knob
with a bit of steel wool, and Wow!
What was old and tarnished and ugly 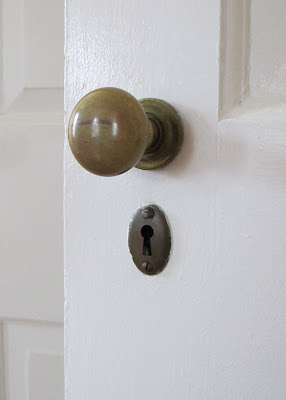 is once again polished and regal and beautiful.
Behold! 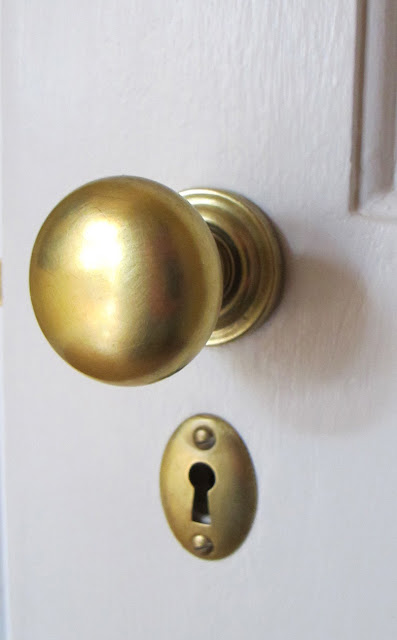 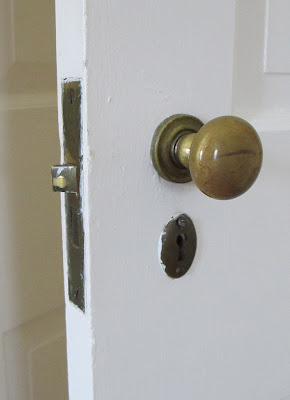 but Dan cleaned it all up and it looks wonderful now.

The doors have been sanded and scraped and puttied
and years of careless painting and neglect have been erased. 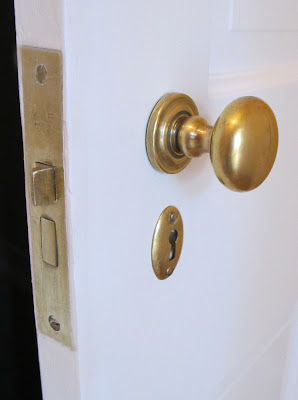 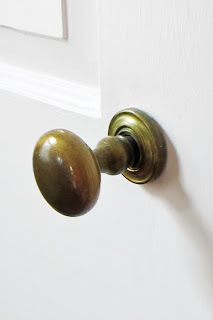 also underwent the treatment and looks much better now, too. 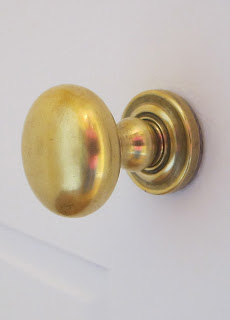 There's still a bit of a patina on the door knobs, which I like
and which I think would have been ruined if Dan had used a chemical brass polish.

The steel wool did the job so nicely
that we've asked him to do all of the hardware as he paints each room.

This partly explains why nothing is finished...
but a lot is happening.

Sneak Peek at a Work in Progress

I have been working on so many projects lately,
and none are finished,
but I want to share a sneak peek at one of the big ones....

When our son moved out, he took a lot of his old bedroom furnishings with him.
I wasn't sorry to see much of it go, only him, and then, only a little.
It was time and he's doing well on his own.
We just sort of closed the door to his room and ignored it for a while.

Enough time had passed
and it seemed ok to reclaim the room from boyhood shrine
and give it guest room status.
Lots of patching and painting and sticker removal have been done
and the room is now habitable again.

I have some gorgeous twin beds that were in my Mom's house
and I thought they would be perfect in this room.

And then I found the perfect mirrors to hang above the beds...

Here's a close up of one of the mirrors- I'm still working on window treatments and accessories,
but here's a peek at what's been done so far... 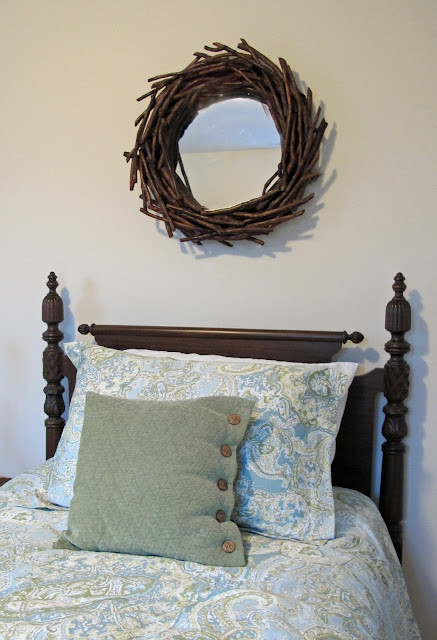 Comfy Pottery Barn duvet covers and shams
and nice new sheets and blankets.
I may have to try it out myself...
They say you should try sleeping in your guest room
to make sure it's got all the necessities and niceties your guest will need.
I'm game.