This weekend marked the last of the "Clean Sweep" Unlimited Refuse Collections in our town.
These were held annually for many years, then semi-annually for a few years
and alas, will now no longer be held.
It's like a Carnival weekend here
and the streets are clogged with lookers and pickers and metal scavengers.
It's all very green if you think about it.
And I do think about it.
In fact, it's one of my favorite weekends in this town.

Several years ago, we had a party on Clean Sweep Weekend
and asked everyone to bring the coolest thing they could find at the curb.
We saw lots of amazing things that had been cast aside by their owners
only to find a new purpose with someone else.  One man's trash ...

We scored a cement garden statue that once graced our neighbors living room fountain.
It's nestled in our own garden now. 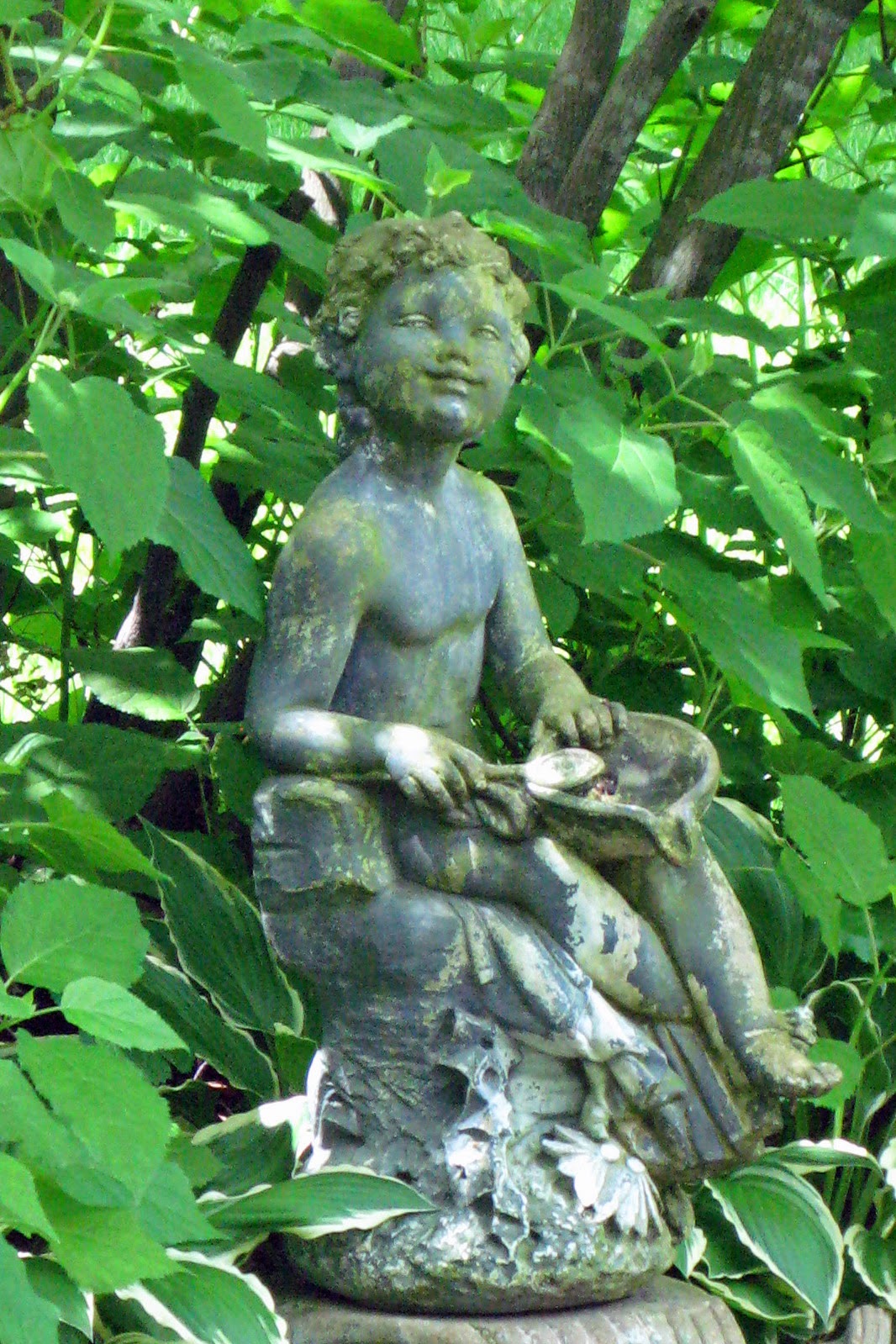 One year, our son and his friends spotted a pair of white swivel tub chairs at our neighbors' curb.
They managed to drag them home and put them in the basement man cave.
One was a bit damaged but the other one was pristine.
And we knew they came from a good home, so... I allowed them....

Fast forward a few years.
The neighbors who had put the chairs at their curb had moved
to a new house just around the corner.
When it was finally time to redo our basement rec room and the chairs had to go,
we decided to have some fun with them... 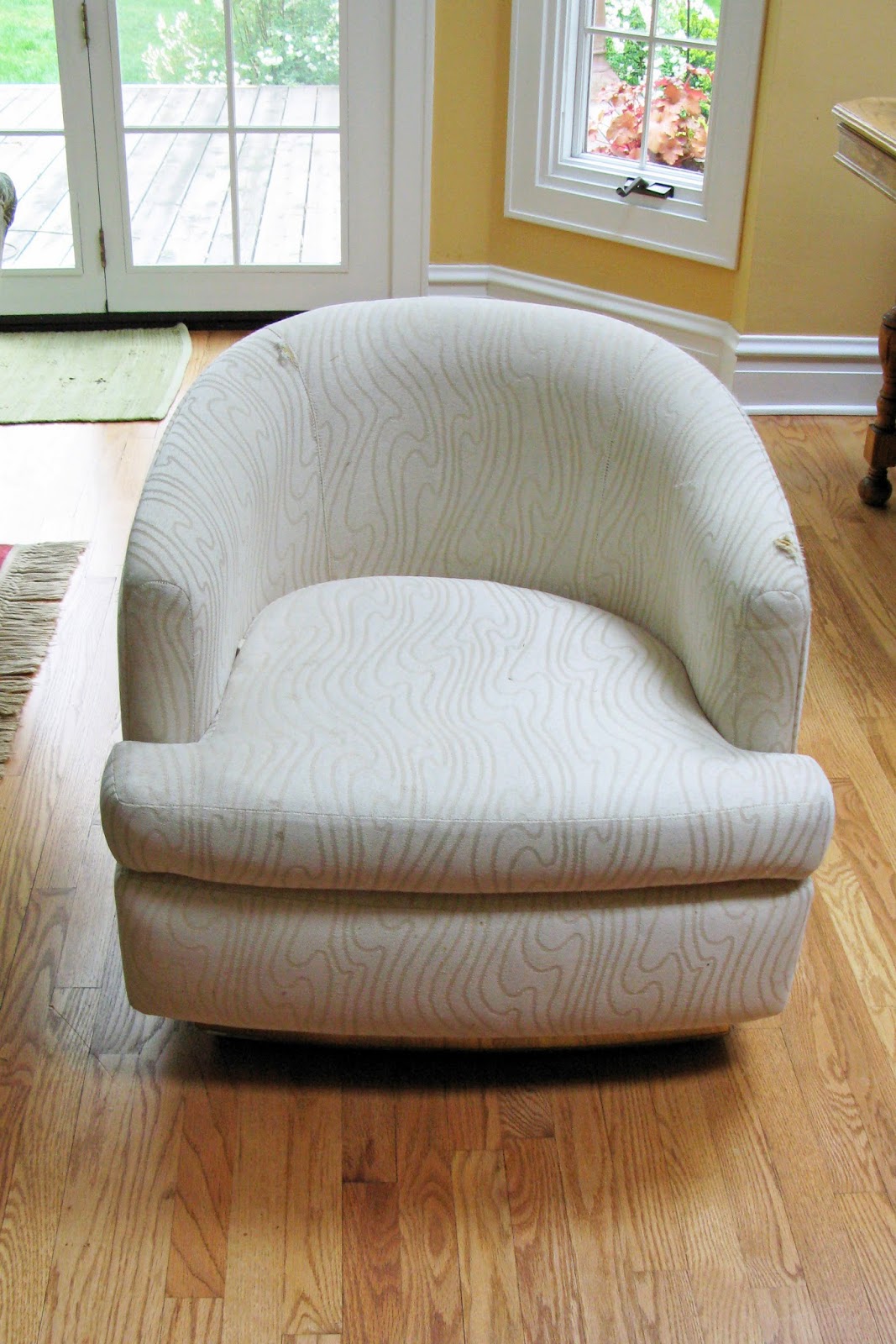 We waited until clean sweep weekend and set them in front of the neighbors' new home
with a note tacked onto the chairs saying "We found you at last!  It's so good to be home!"
Good clean fun...
Never heard what they thought...

And then there were the peach velvet chairs.
Two years ago, on the last clean sweep weekend, I spotted a pair of these beauties 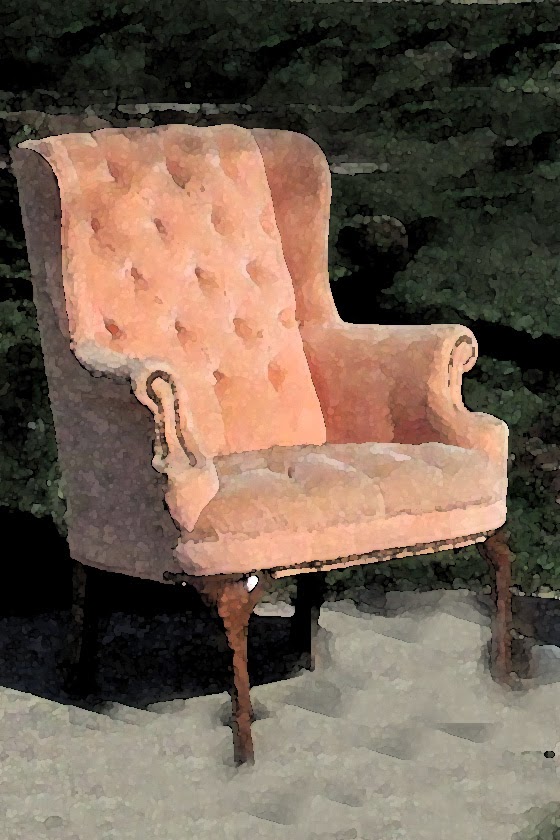 as they were being lovingly set at the curb, complete with a clear plastic tarp
to protect them since it was sprinkling.

Yes, I did.
I put them straight into my Jeep and I brought them home.
Mr. Grand was not pleased.

In my defense, they are a nice size for wing chairs - kind of petite.
I could see them as head chairs at the dining room table
or together in a bedroom corner or...
Oh, I had ideas.  And a good upholsterer...
Unfortunately none of the ideas worked out
and Mr.Grand has spent the last two years grousing about storing them in the basement
(where they were harming absolutely no one at all...)

So this year, I relented and we agreed to set them at the curb.
But they are kind of ugly and we really didn't want them in front of our own house,
because, you know, people might talk...
What to do, what to do?
Where could we put them????

We had a brilliant idea!
We took them to the home of our good friends and set them up there
for everyone to enjoy. 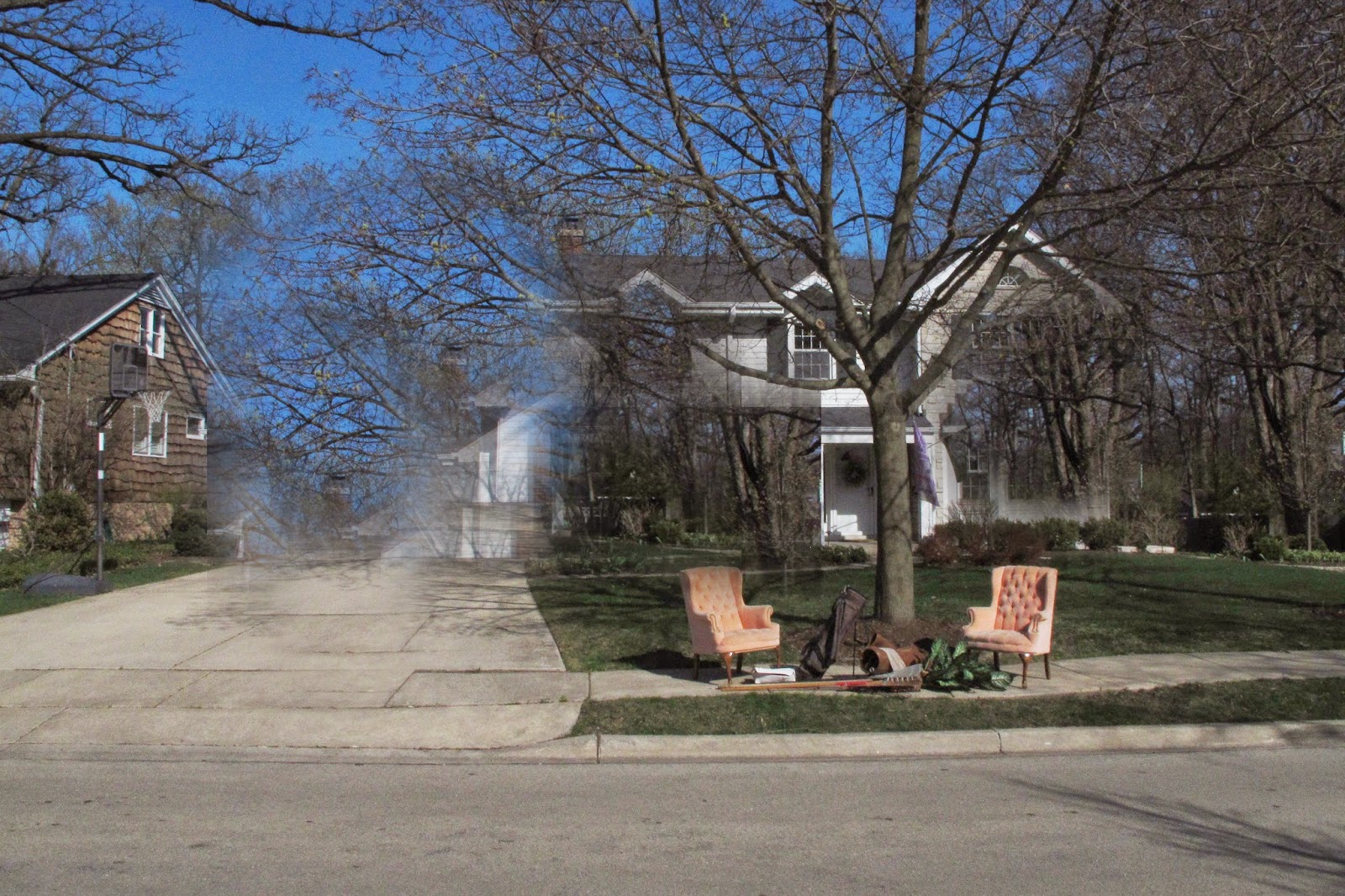 (Image blurred to protect our friendship)

We knew our poor, unsuspecting friends were off at a Prom Picture Party
and would be helpless to defend themselves
against this tasteless display of exterior decorating.
:^)))

They do look nice there, don't they? 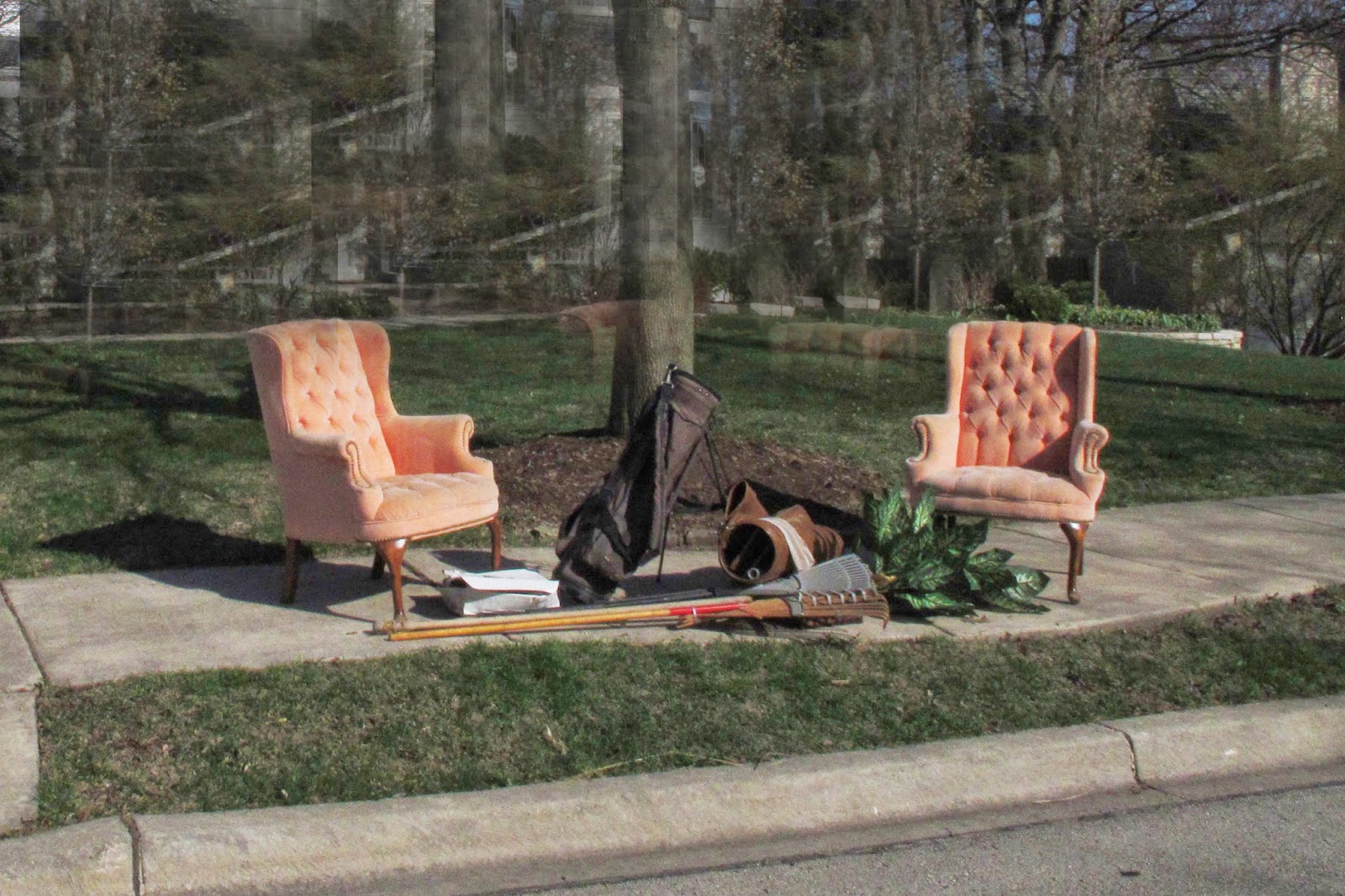 (Image blurred to protect our friendship)

I was so thoughtful,
I even sent them a picture from my phone so they could see what they were missing
while they were at the party...

The chairs didn't last long in front of their house, because other people have ideas, too...

And while I was out cruising around, looking for treasures,
I spotted this puppy just begging to be relocated: 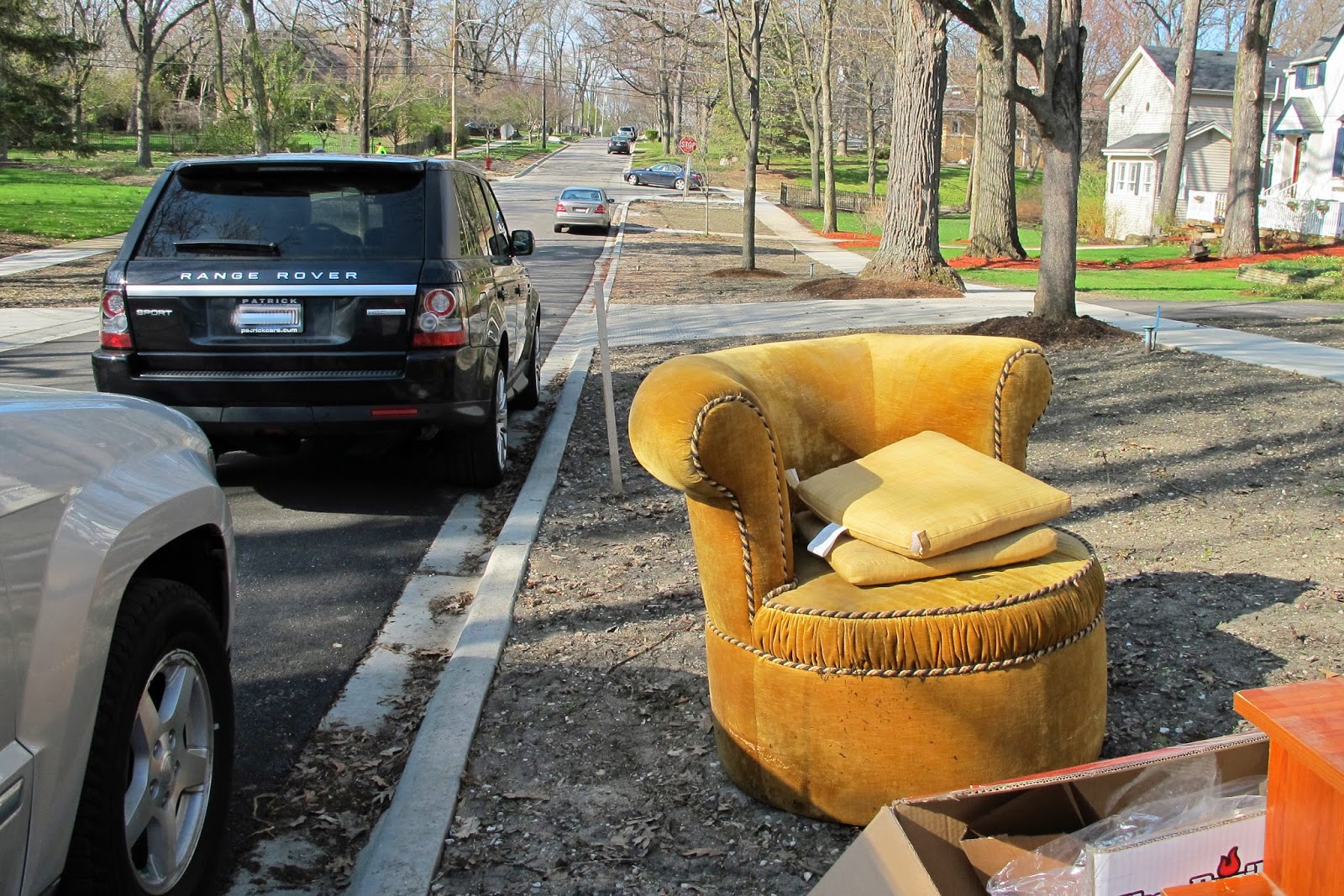 Enough mischief for one day, I decided.

But then, right next door, there was this beautiful mirrored desk.... 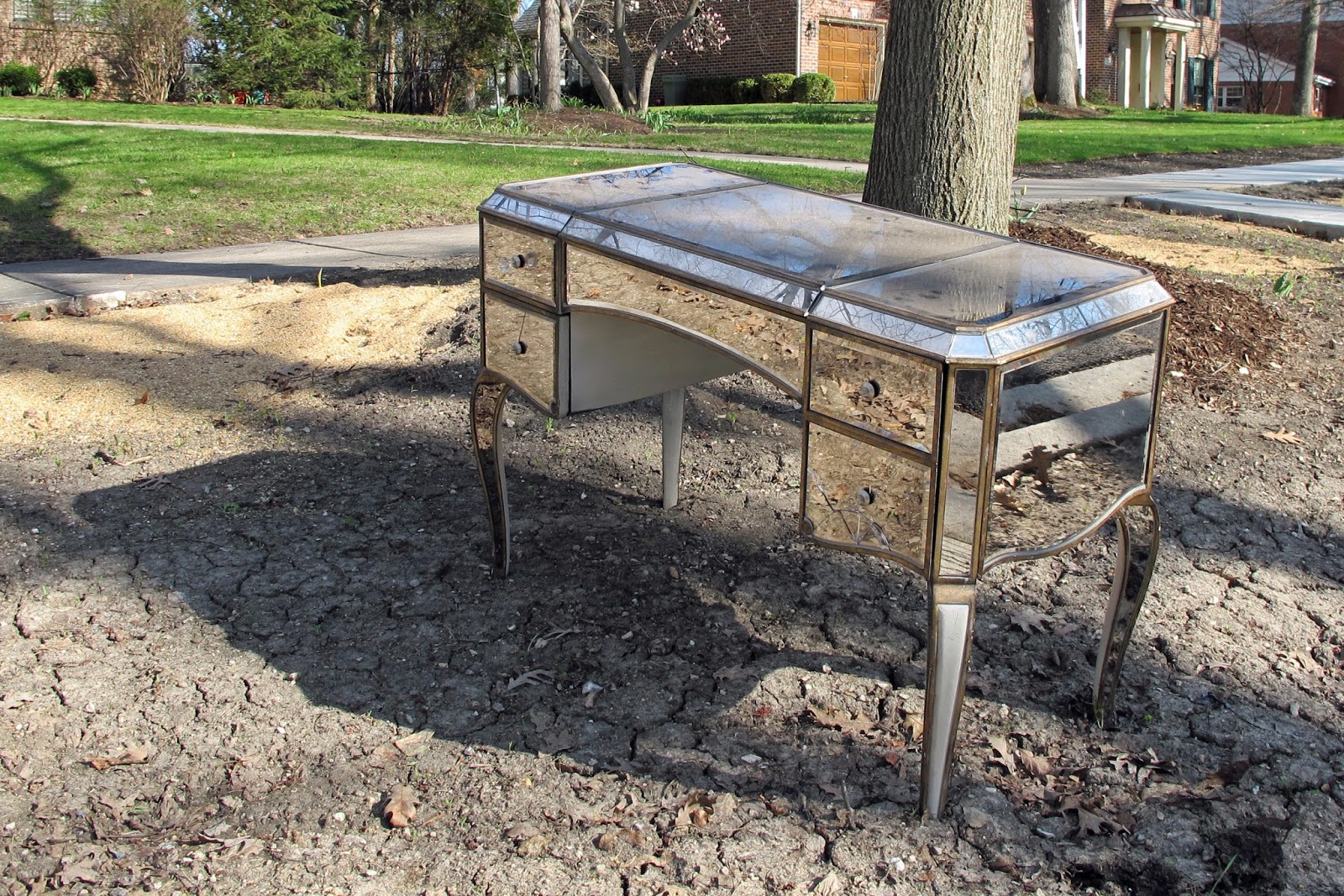 I almost put it in my Jeep, but thoughts of Mr. Grand blowing a gasket prevented me.
But someone, somewhere got a great find!


Linking to:
Inspire Me Monday at My Uncommon Slice of Suburbia
The Scoop at Cedar Hill Ranch
Inspire Me Tuesday at A Stroll Through Life
Wow Us Wednesday at Savvy Southern Style

And Away We Go! Kitchen Remodeling - Day Zero


The Kitchen Demolition starts Monday morning at 7:00 AM!

Recently, I told you that we have finally decided to remodel our 25 year old kitchen.
You can read about that here.
It's suddenly really happening and there's lots to do.

Let's call today "Day Zero".
We are frantically emptying cabinets and closets and shelves
and trying to get semi-organized before the demolition begins.
I'm excited and nervous and my head is spinning with decisions still to be made.

In the meantime,
I would like to thank you all for the many, many comments and emails I received
sharing your favorite parts of your kitchens...
There were so many good ideas and very thoughtful replies
and I appreciated every one!

Here's a sneak peek at the choices we've made so far. 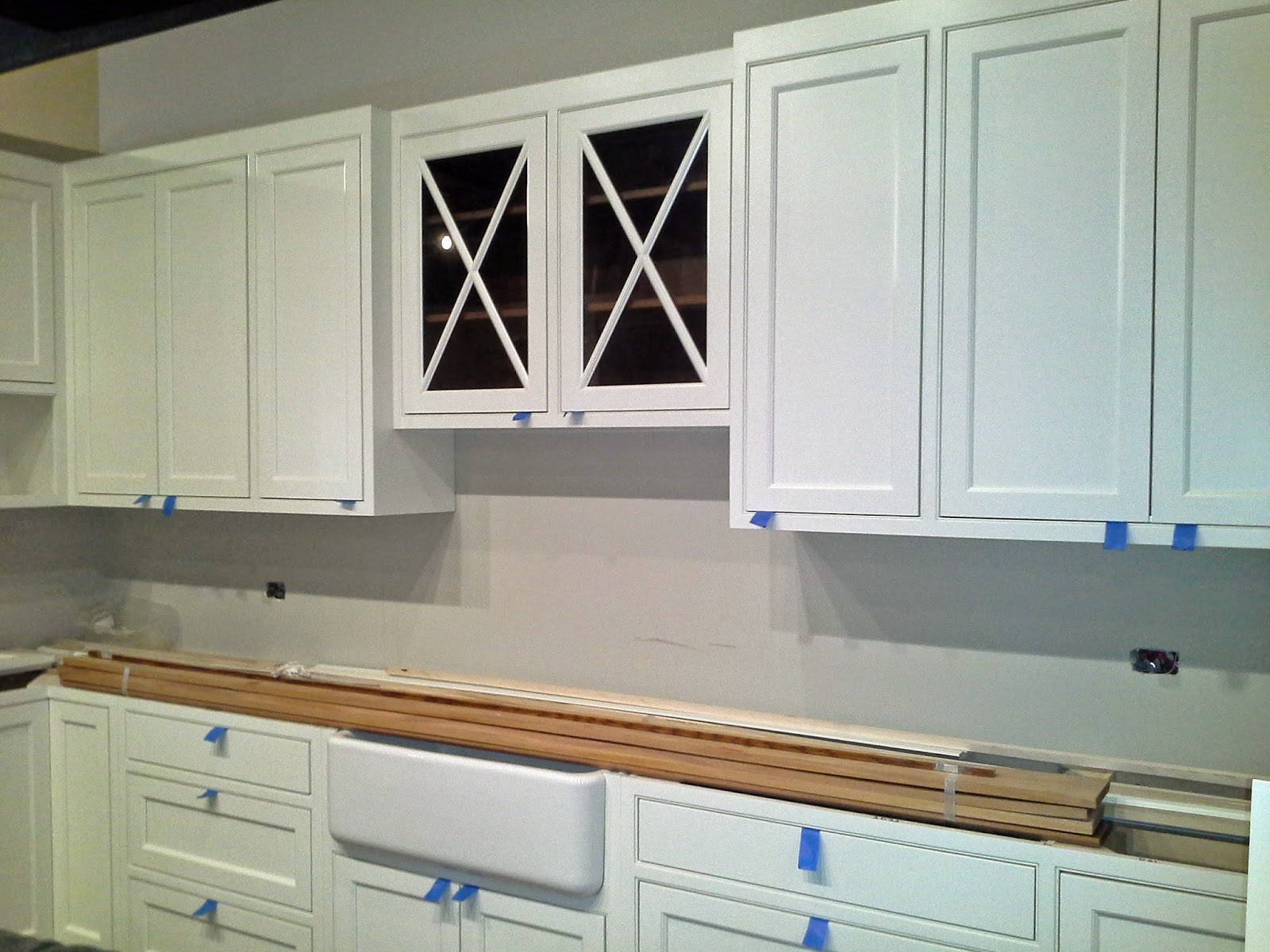 The paint color in the display is SW Alabaster.

Our cabinets will be painted to match Benjamin Moore Mountain Peak White: 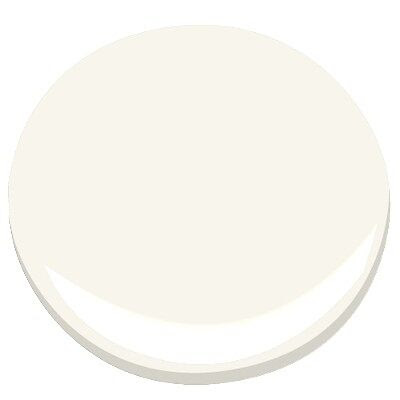 This is the door style- a flat center panel with a detailed inner edge. 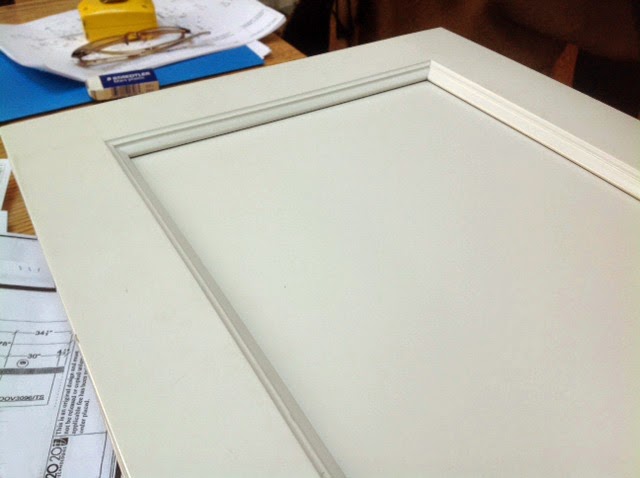 I'll tell you how I chose the cabinetry and the color and the door style in another post.

We'll use Amerock Antiquities Twisted Wire Mega Pulls
for the refrigerator and the drawers. 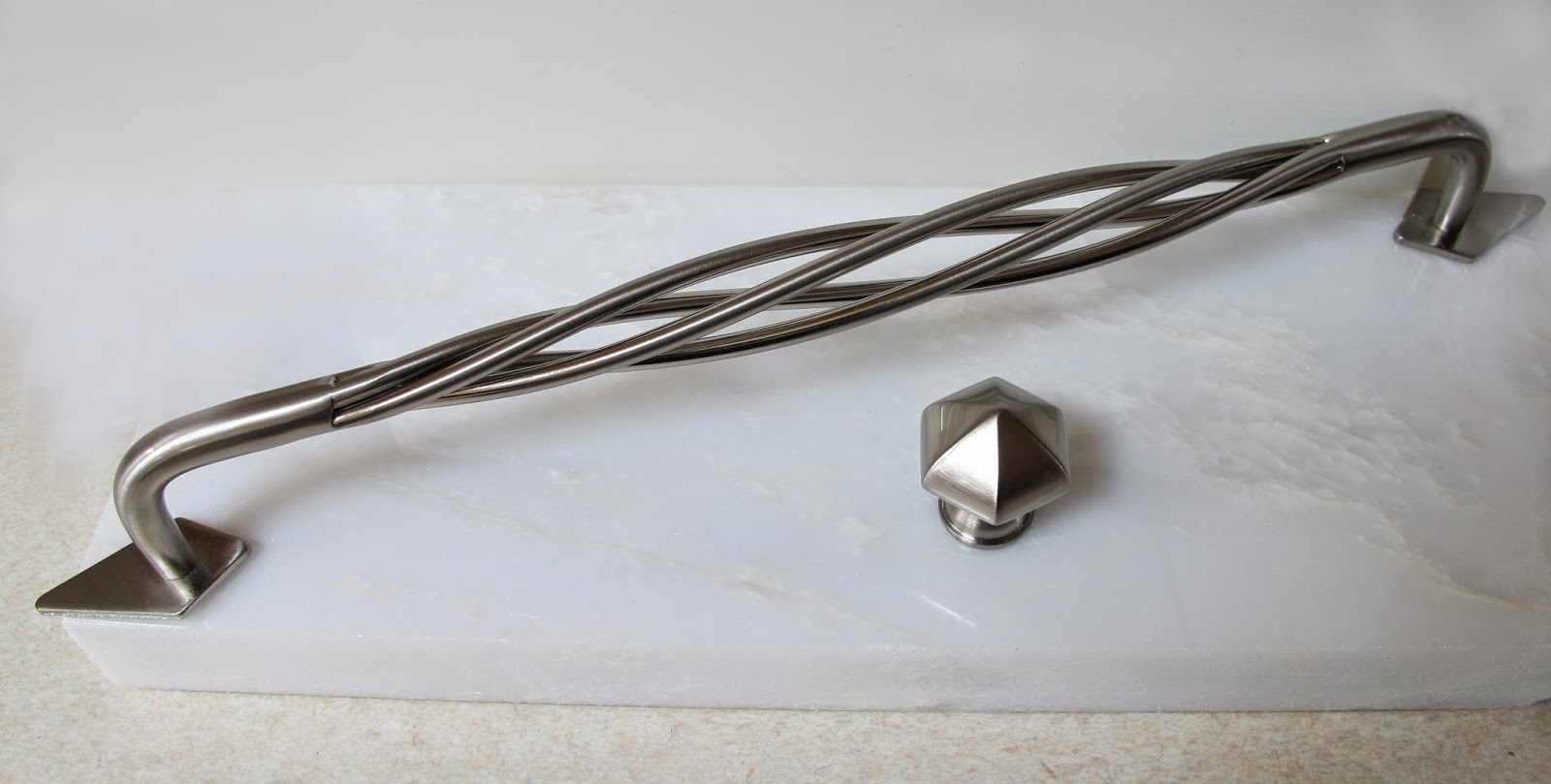 These Hexagon knobs for the cabinet doors are from Rejuvination. 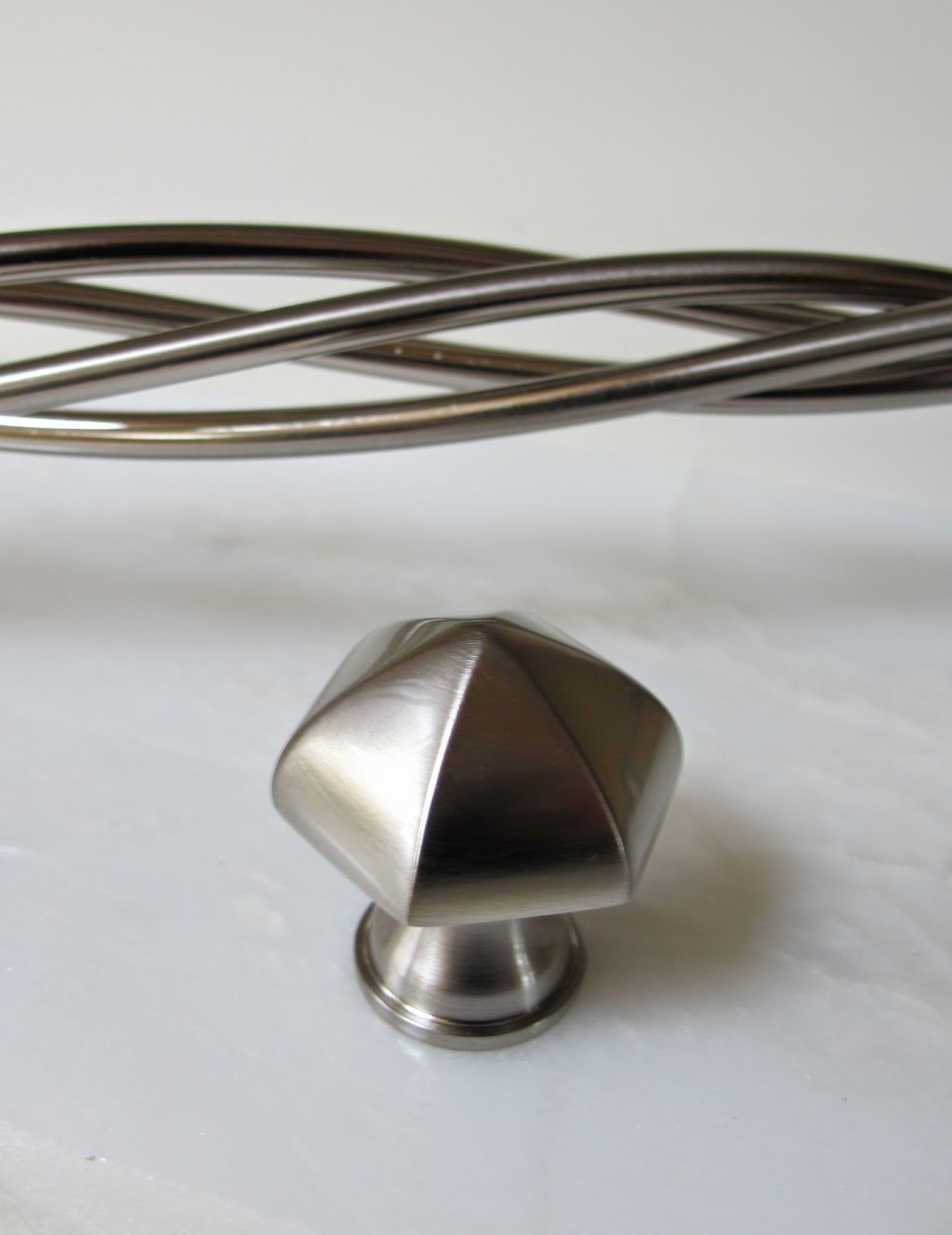 I'll tell you more than I know about hardware selecting in another post...

We've chosen Mystery White Stone for the countertops.
It's really hard to photograph well but you can see it in these hardware pics.
It's very white with streaks of cream and a greenish gray. 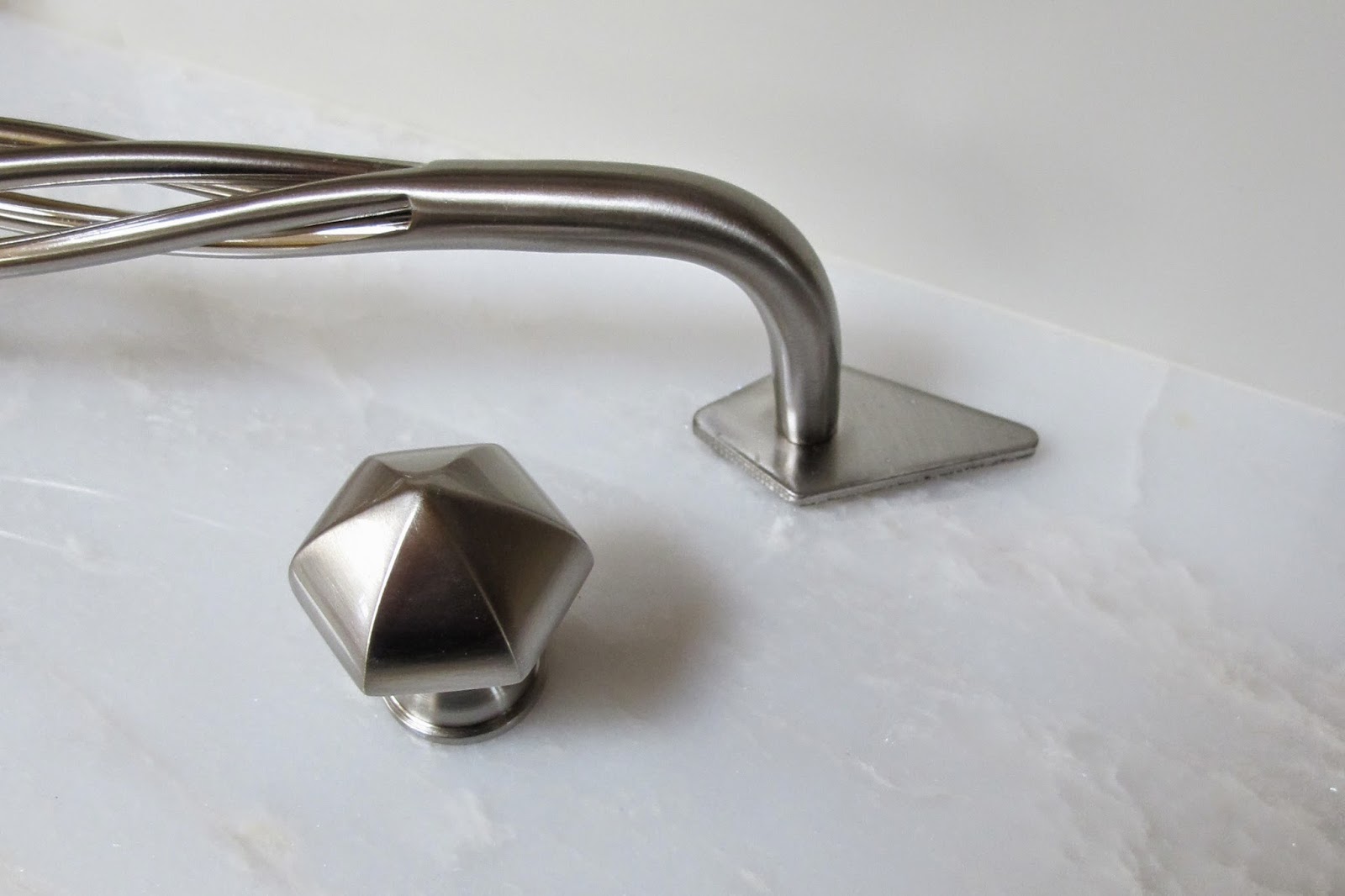 We'll talk about selecting countertop materials in another post.
And the layout- the thought process that went into that.
Then there are faucet, sink, lighting and flooring things to discuss, too.
So many details to consider when planning a kitchen...

This project will be a real bonanza of material for me to share on this blog-
so get ready for the blow by blow process of a major kitchen remodel.

Stay tuned for scenes from Day 1!

Linking to:
Inspire Me Monday at My Uncommon Slice of Suburbia
Inspire Me Tuesdays at A Stroll Through Life
Wow Us Wednesdays at Savvy Southern Style

Posted by Erin~Just*Grand at 3:22 PM 4 comments

Beach Balls Made of Ice!


Get your jacket on and come along with me
to see beach balls made of ice on the shores of Lake Michigan. 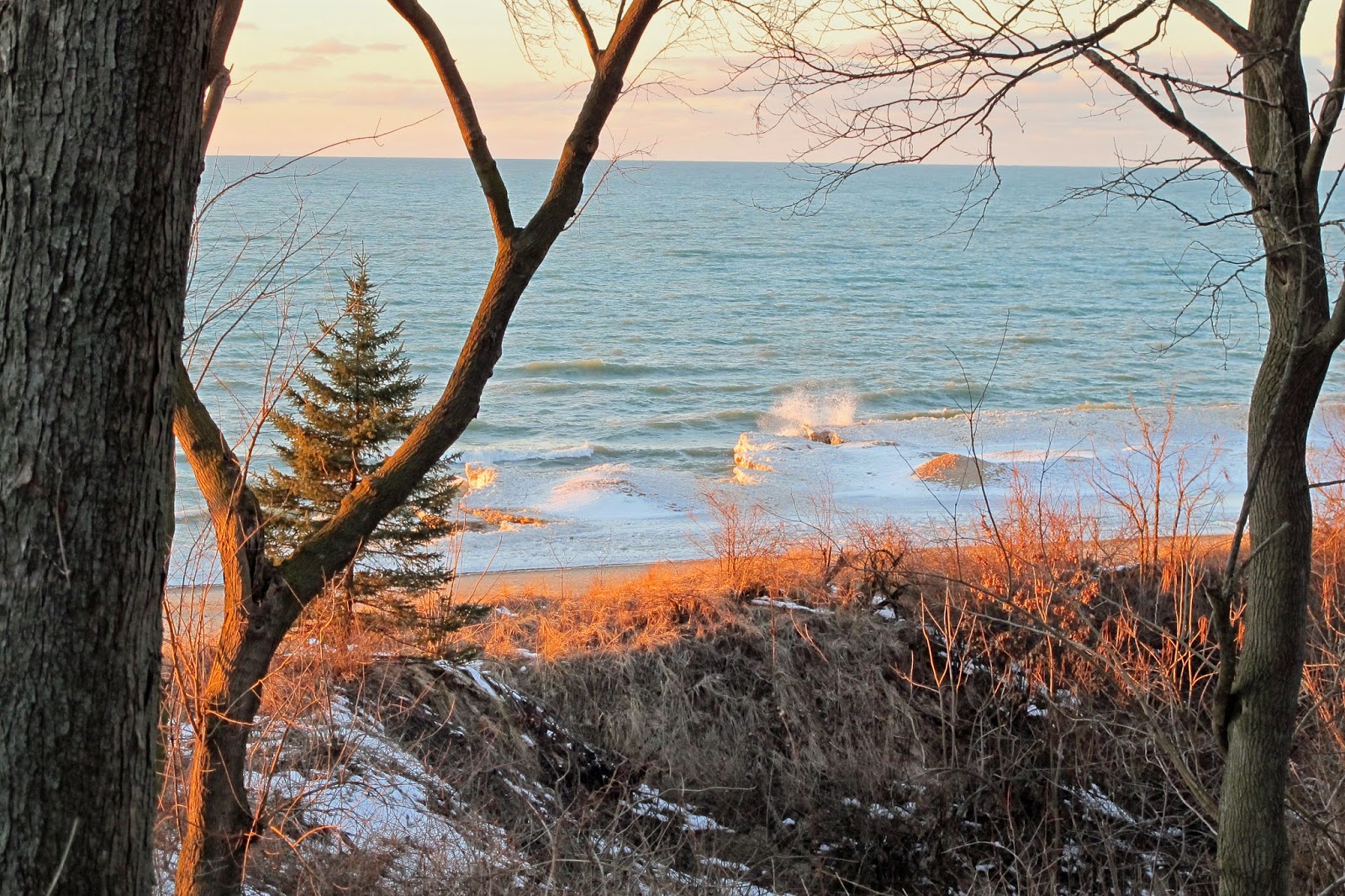 I know it's April, but its been a long, long winter
and the ice has just recently broken up along the coast of the lake.
I have read about the phenomena of ice balls forming on the beach
and I had to go see it for myself. 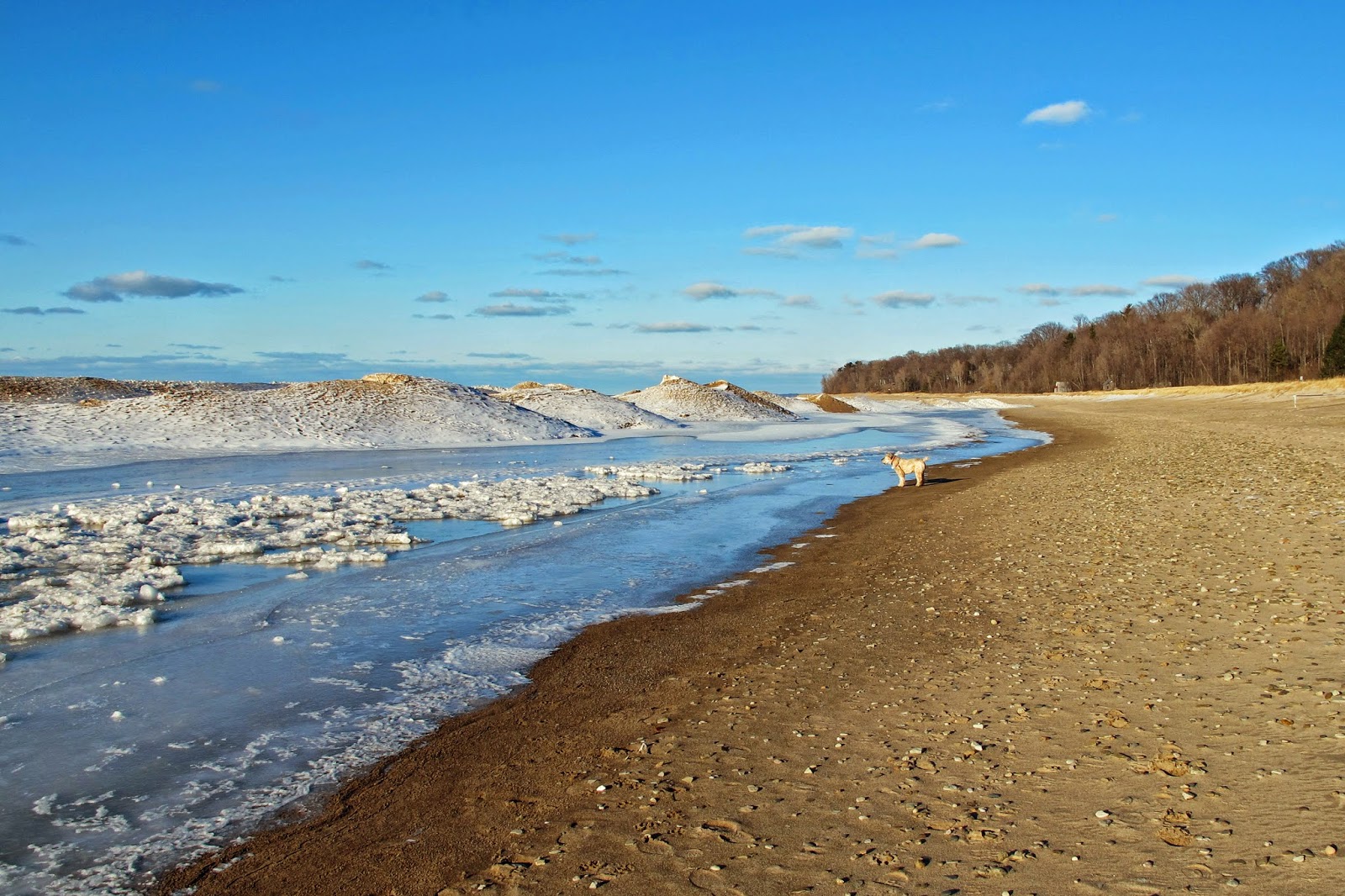 The frozen edges of the Great Lakes are absolutely otherwordly. 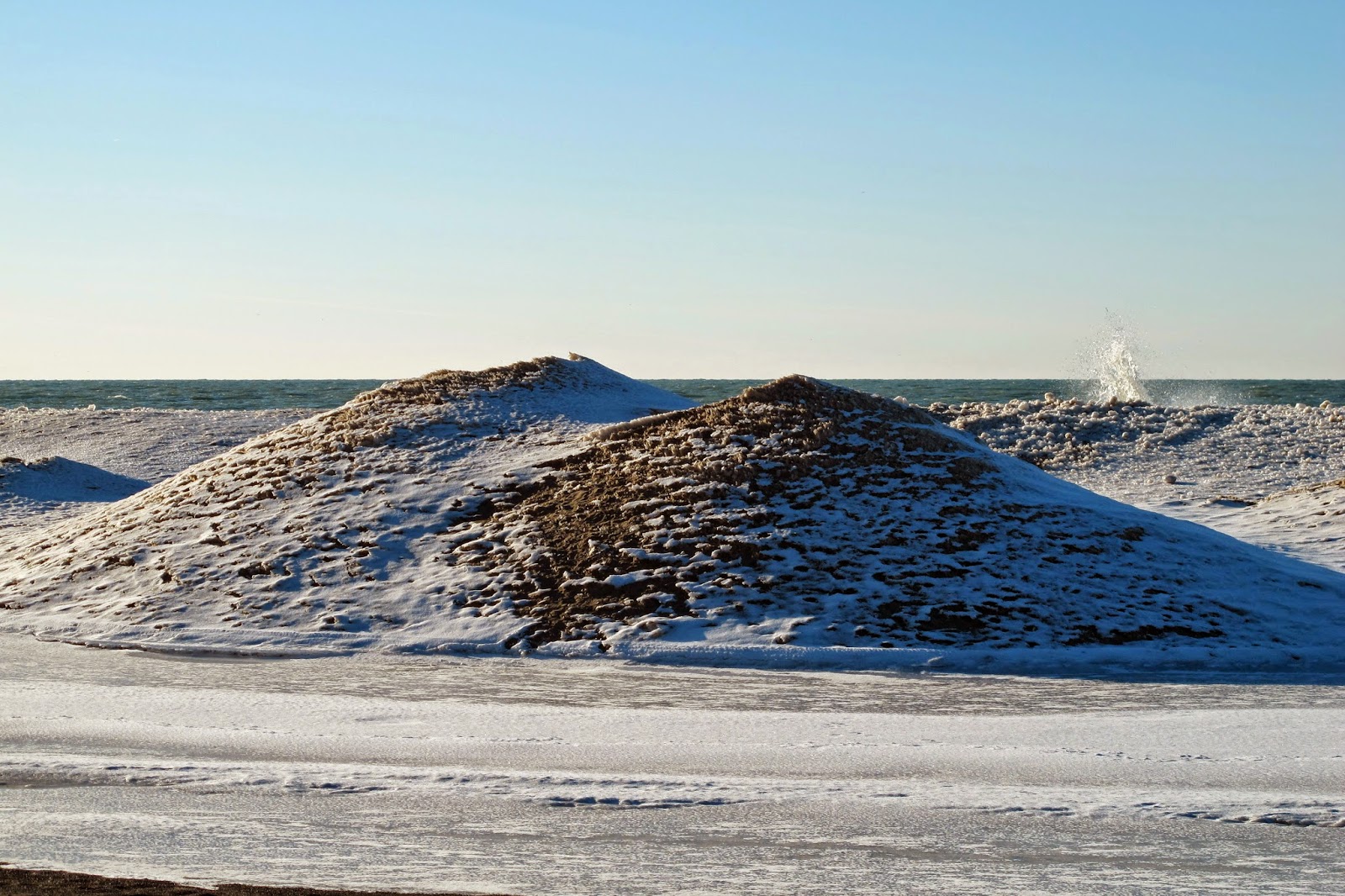 These "mountains" of ice form every year along the coast.
They are very dangerous to climb on, but very compelling to explore. 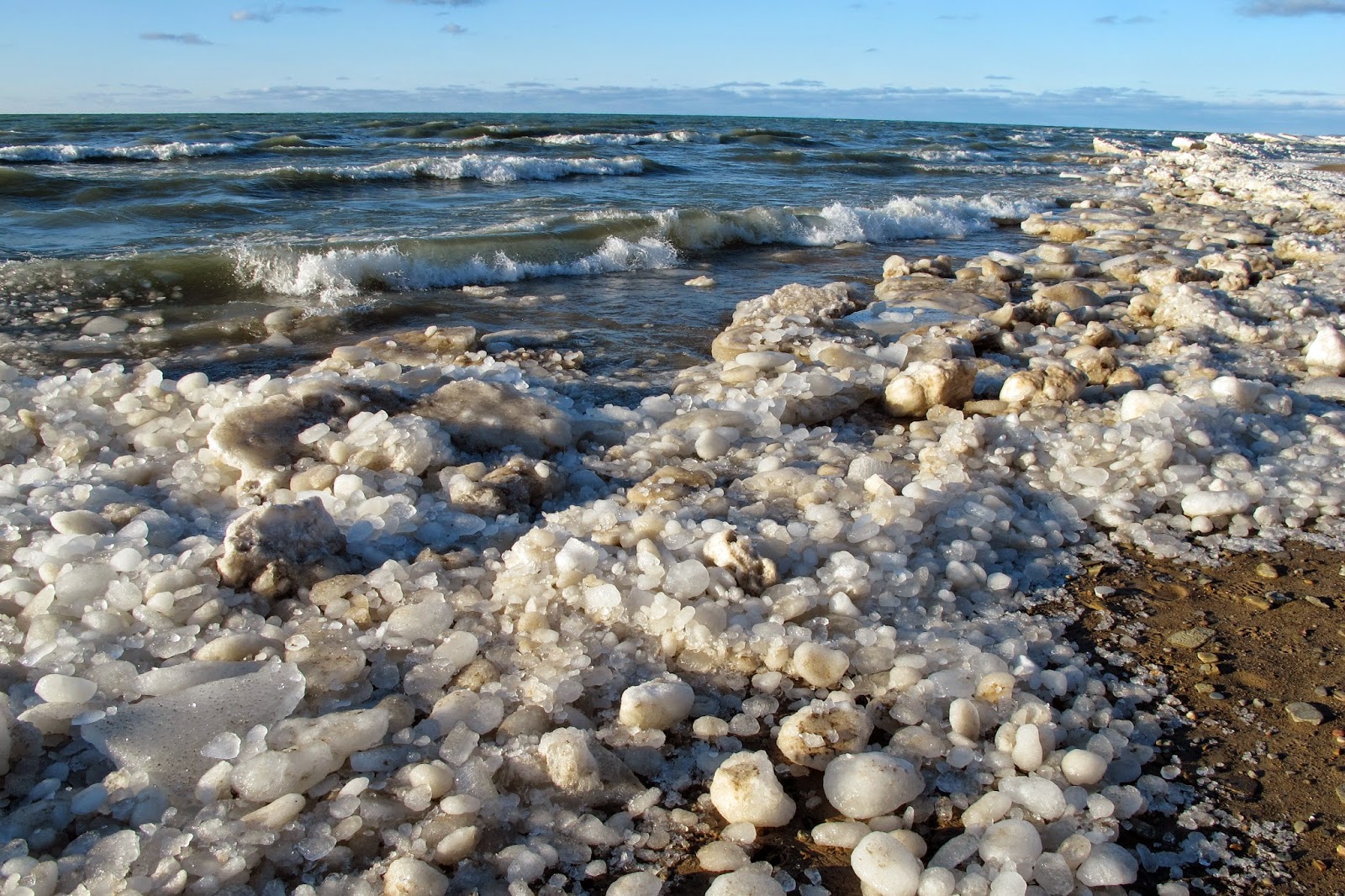 The action of the wind and the waves creates a churning, sloshing cauldron
of bone chillingly cold water
that spews out globules of ice in infinite sizes. 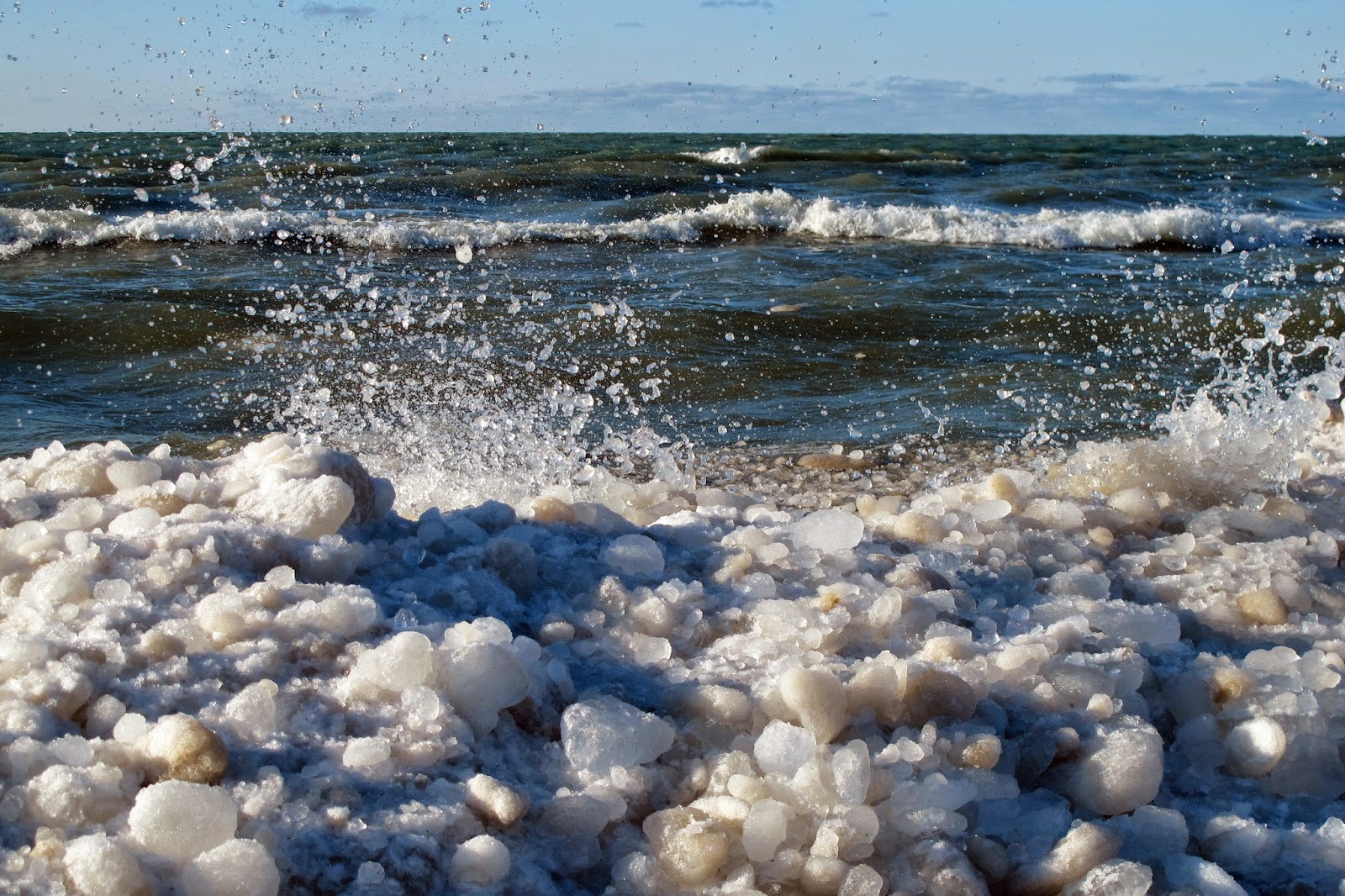 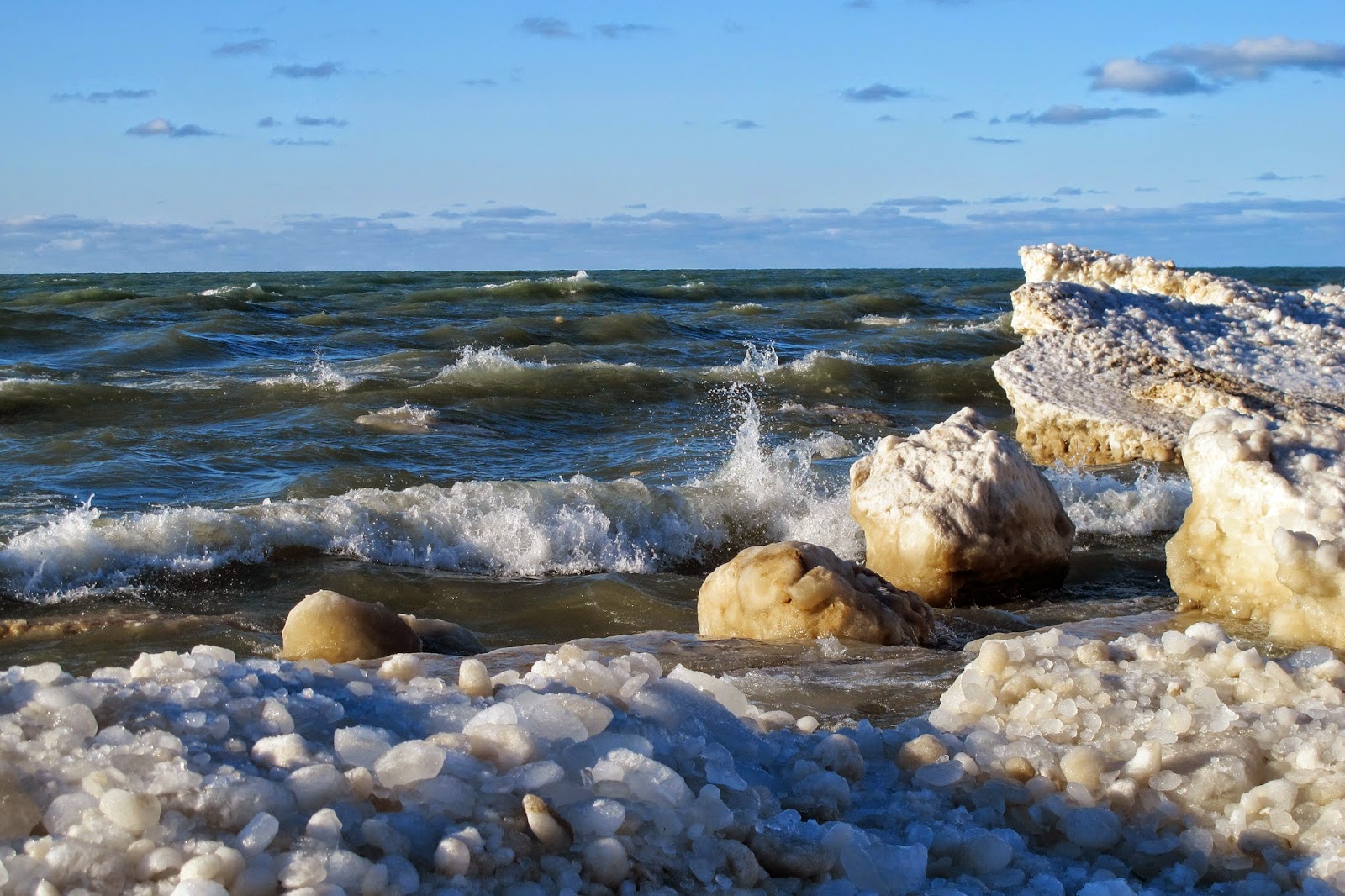 My faithful dog, Burly was happy to come along. 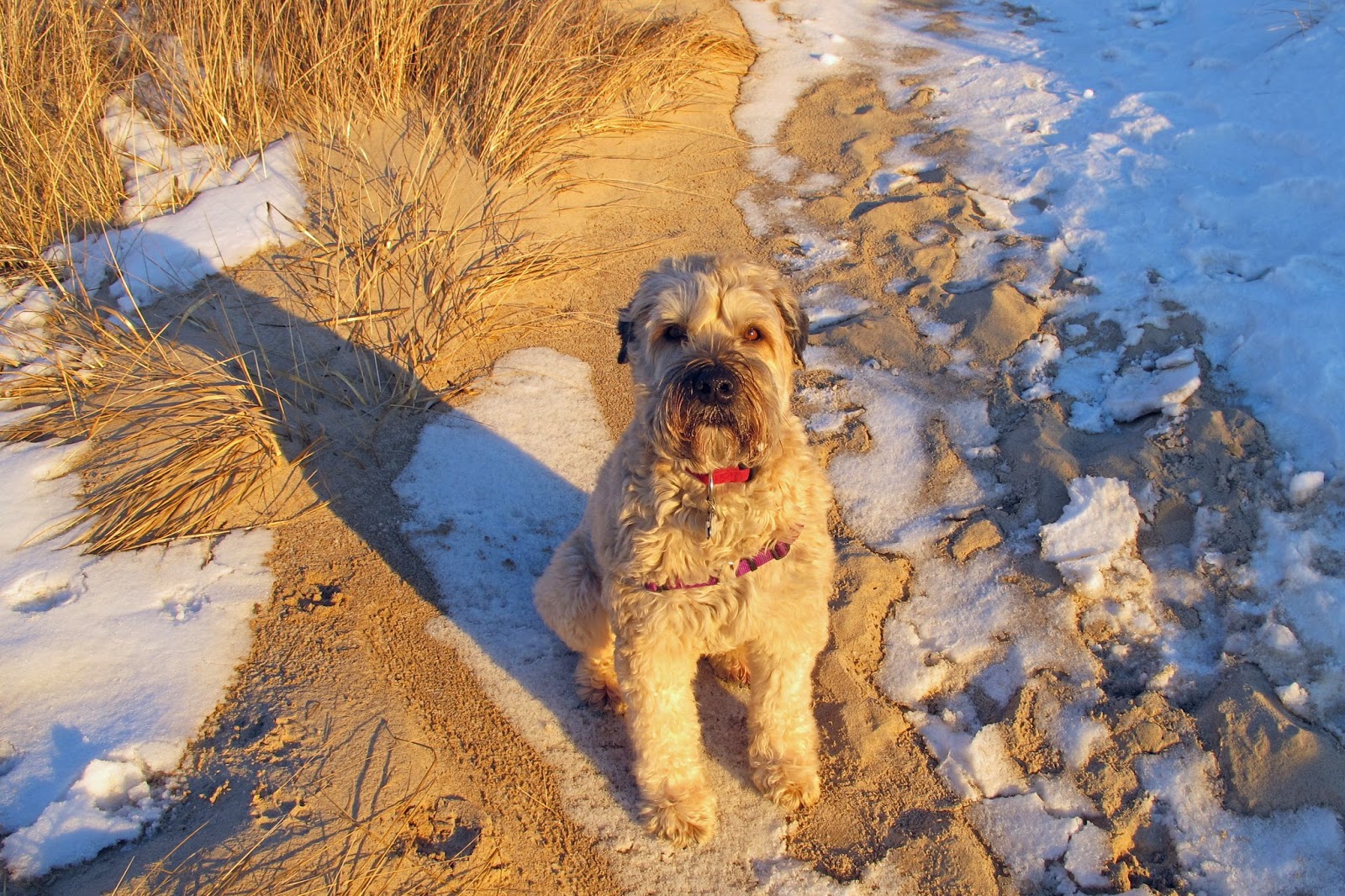 To see her romp around on the beach and clamber over the ice
is to see JOY in it's purest form.
She is in heaven when she is at the beach.
Come to think of it, so am I.... 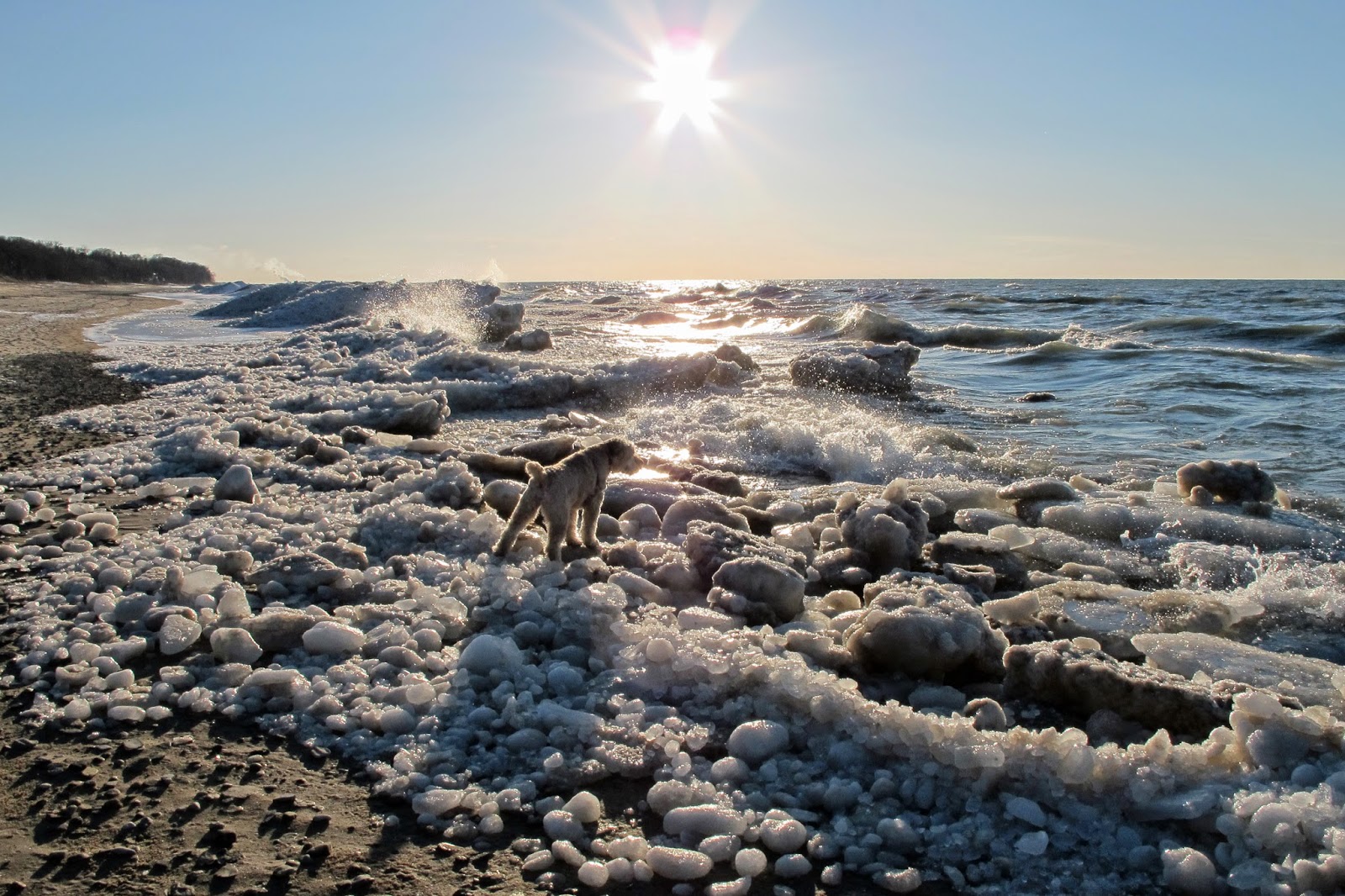 These photos offer a glimpse of the amazing, majestic power and beauty of the Great Lakes.
I was captivated by the sparkling, splashing water
and took endless pictures trying to capture it. 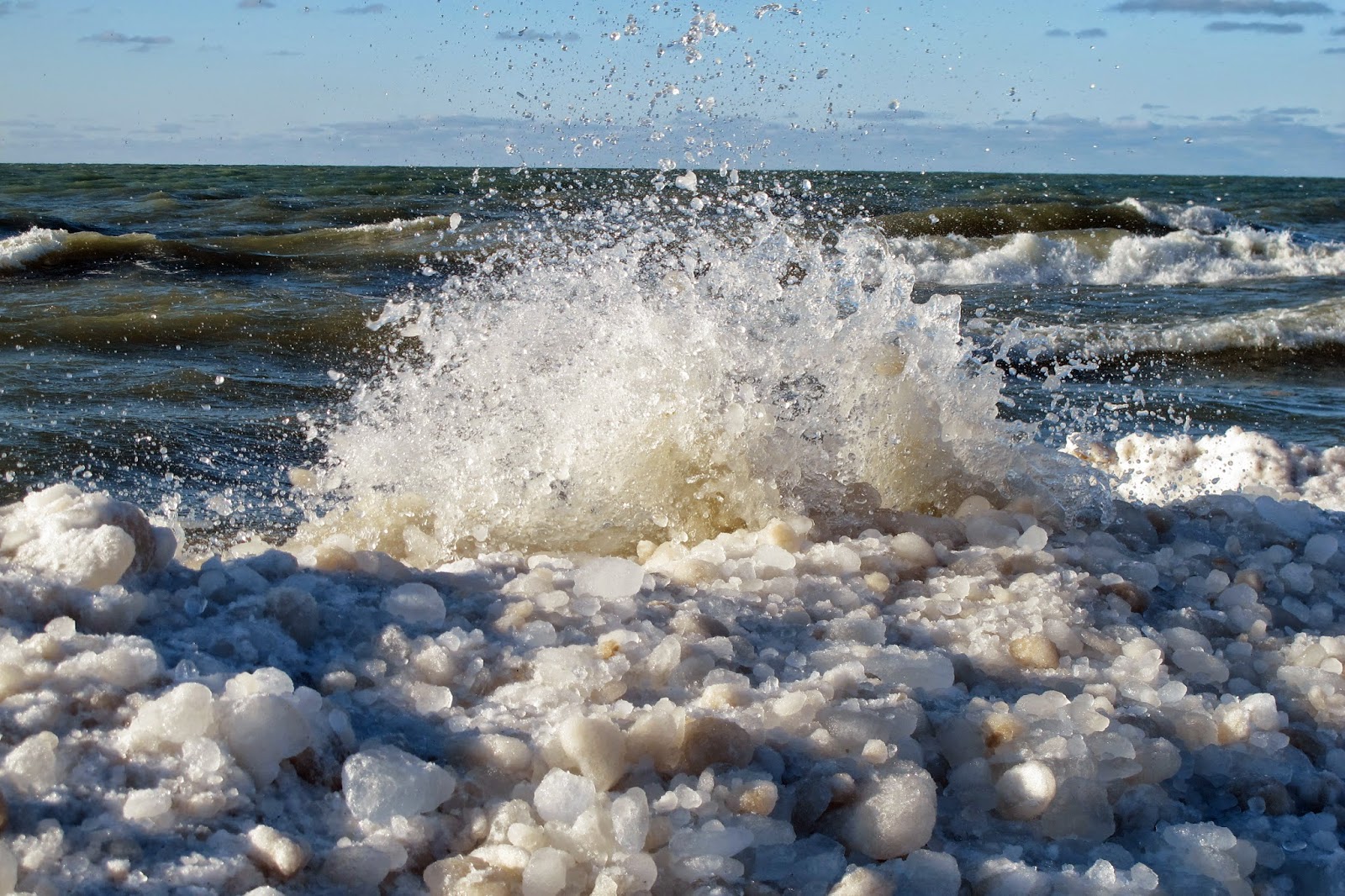 The waves were roaring and the wind was powerful.
It was fascinating to see.

These aren't rocks, they're balls of ice! 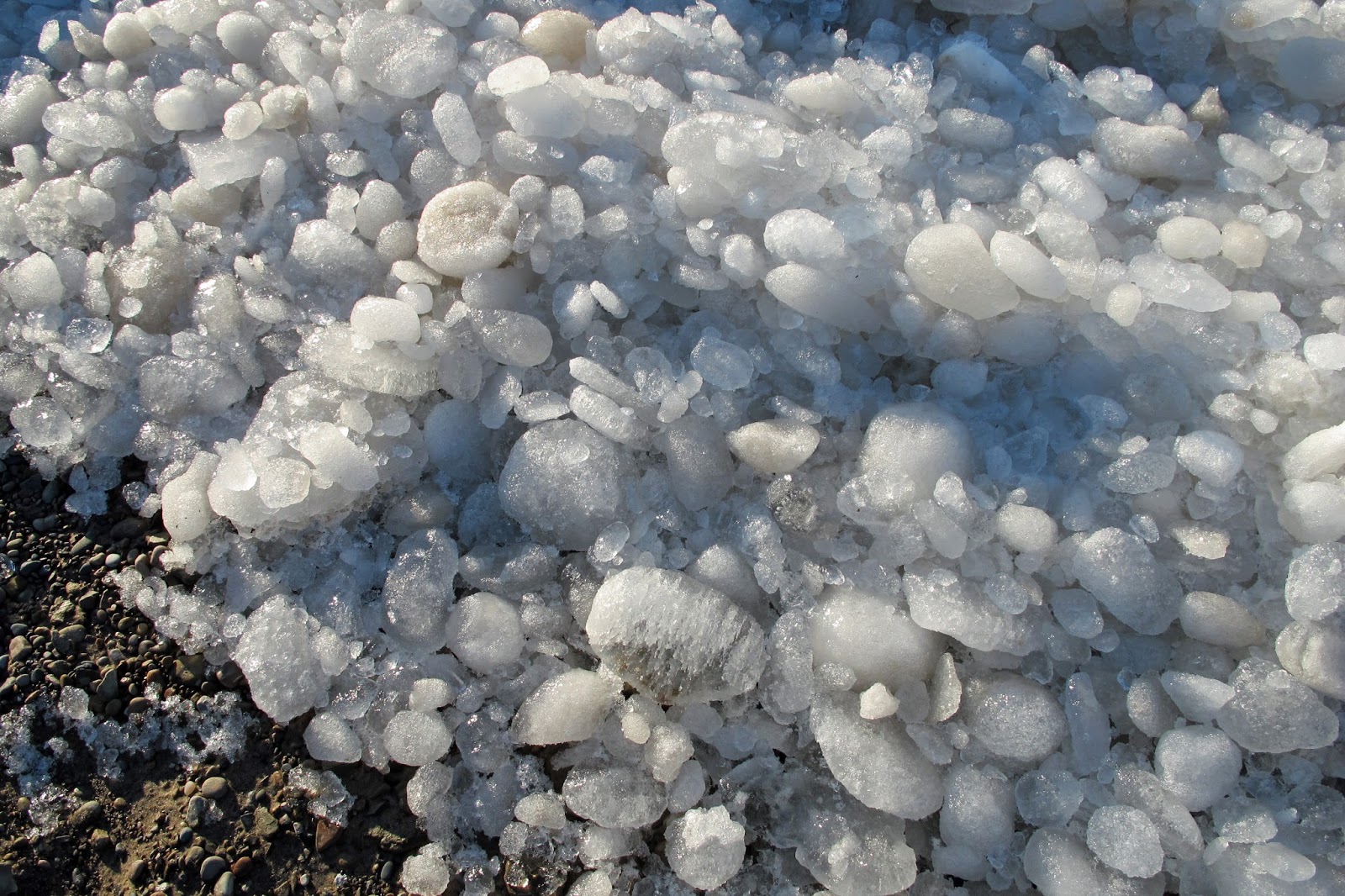 A view to the south, showing the other side of the ice "mountains". 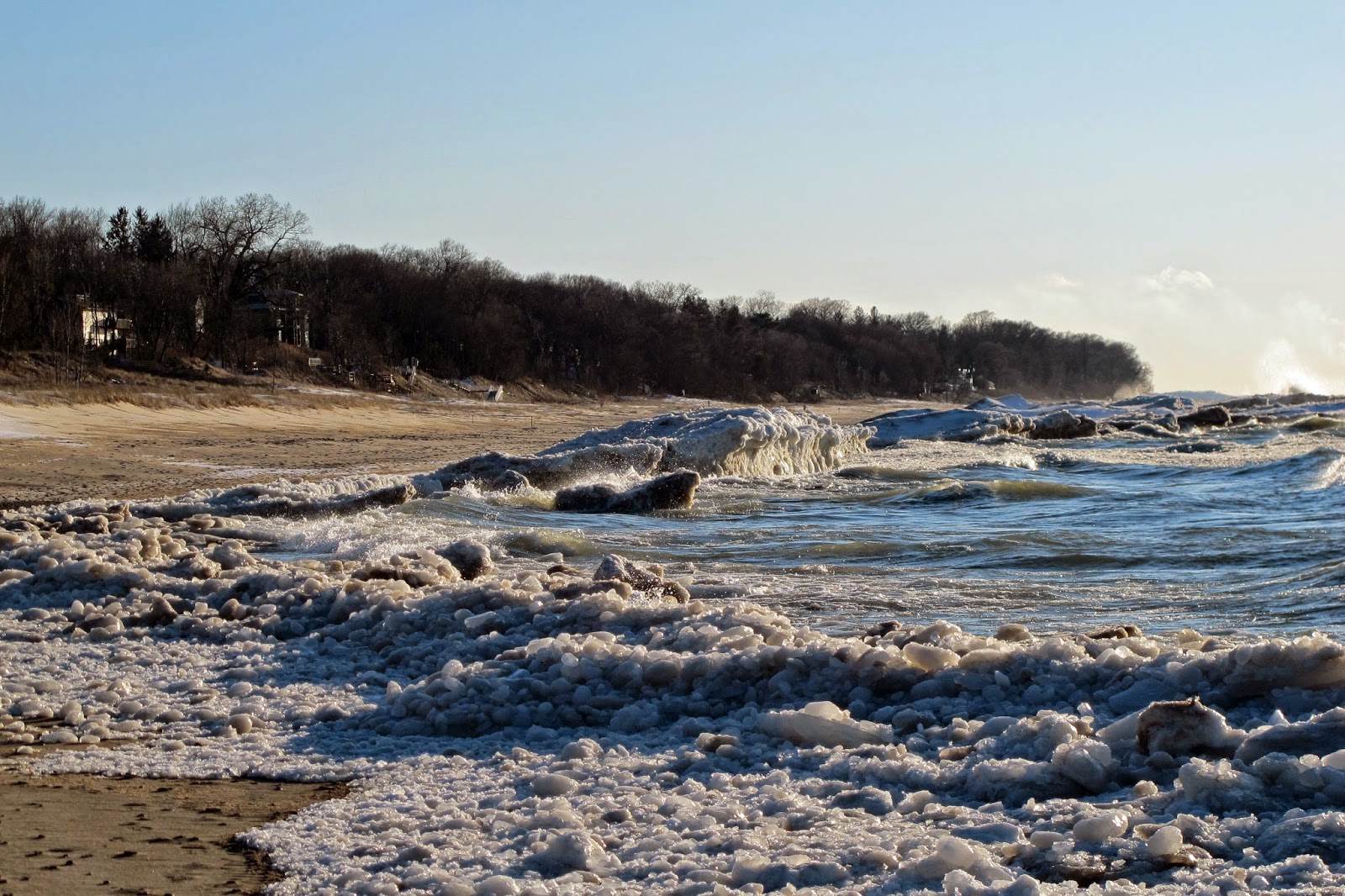 We had a great day, Burly and me.
We never saw another soul on the beach.  The solitude is remarkable.
I'm so grateful to have this place to visit and to share.

Back up the dune, or BuzzKill Hill as we like to call it. 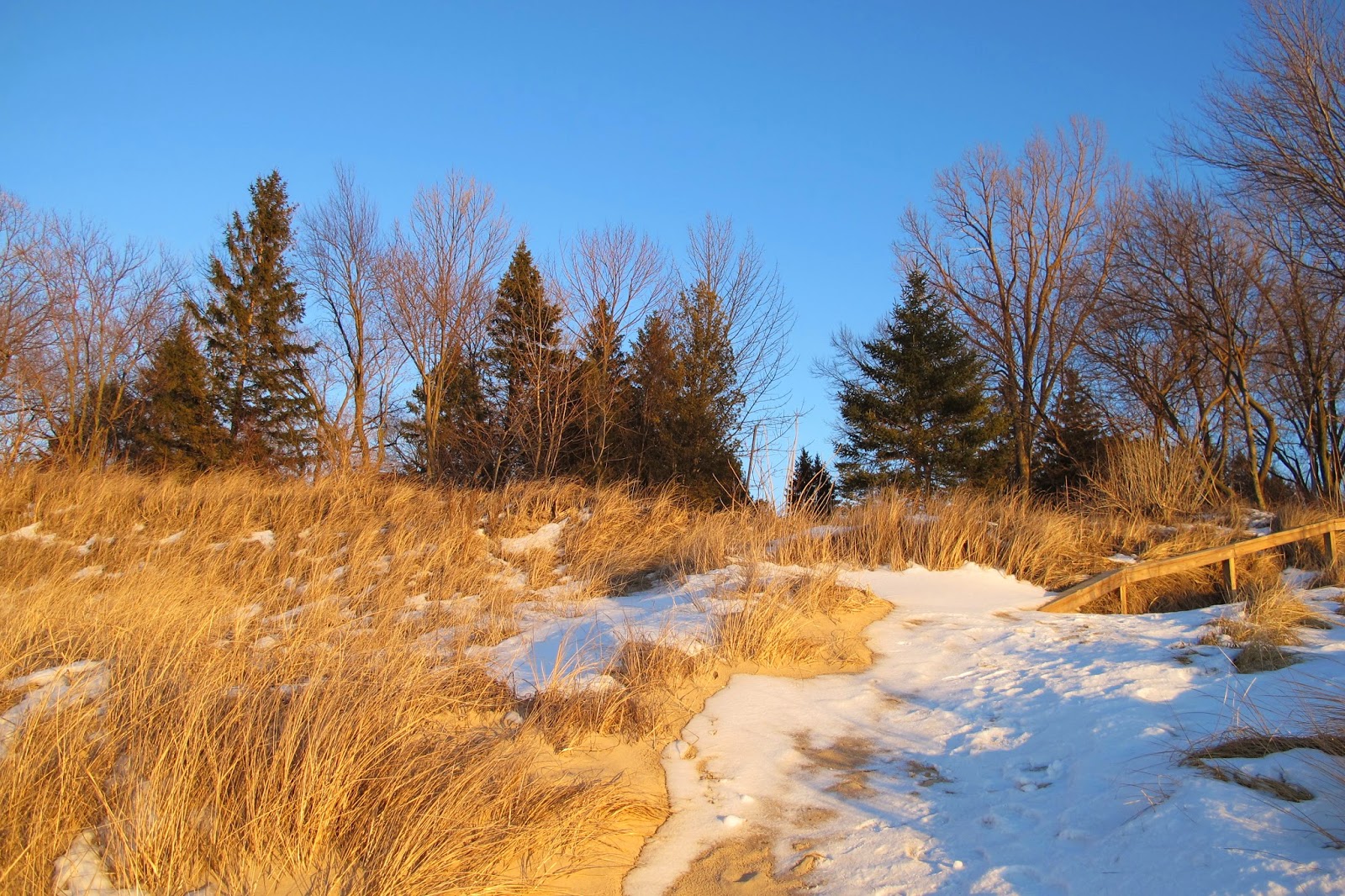 One last glance back before we go inside to warm up. 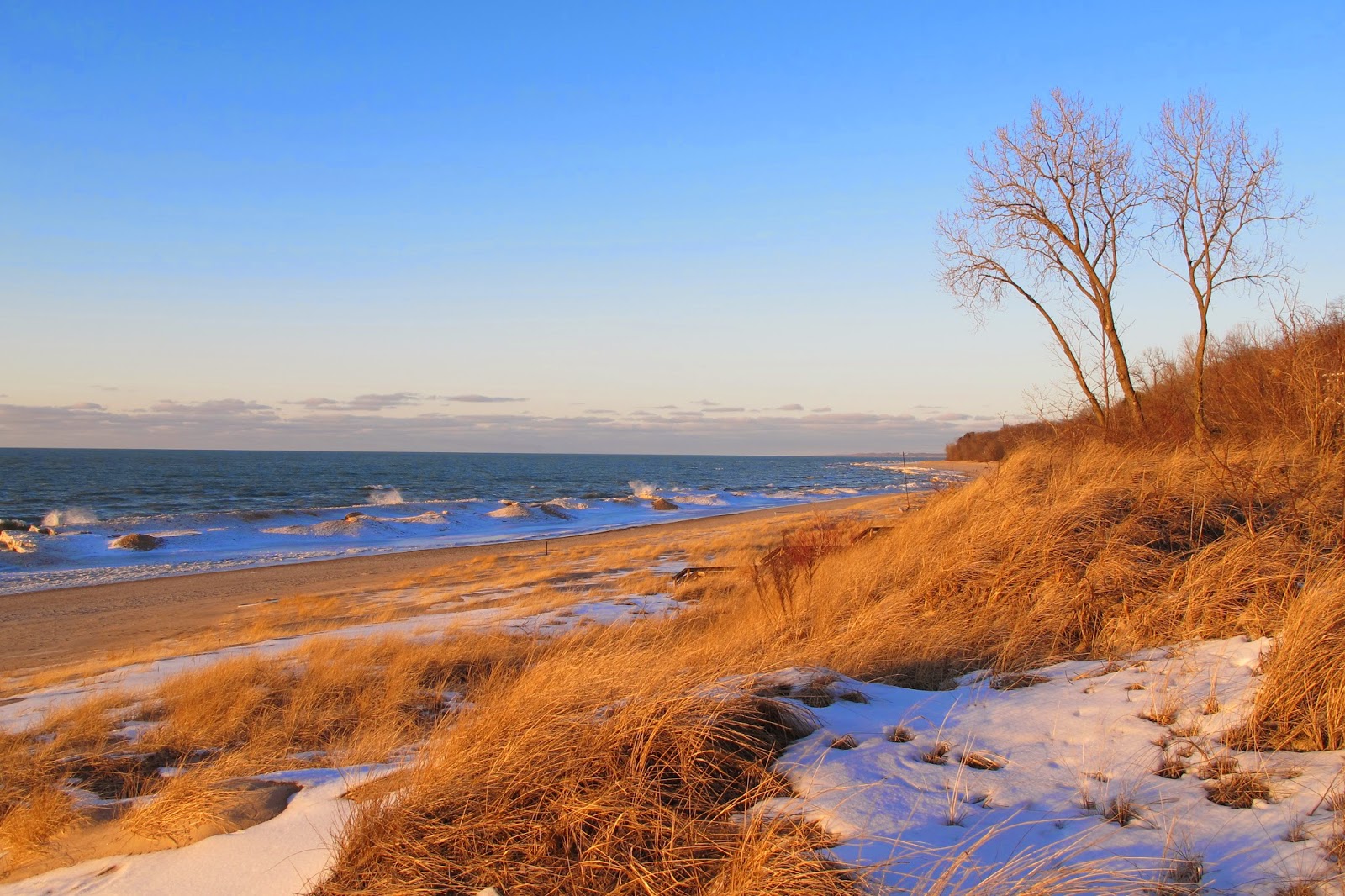 
Linking to:
Inspire Me Monday at My Uncommon Slice of Suburbia
Inspire Me Tuesdays at A Stroll Through Life
Wow Us Wednesdays at Savvy Southern Style