I don't know about you, but I love a good "Before and After" feature-
on blogs, TV, in magazines and here in reality.
I thought I would start off with what we will call "The Grand Project".
Just a little review of what we have done here over the years.
Here is the "Before" picture of our house, pretty much as we bought it in September, 1989.
We painted the front door red, but not much else had been done outside by Christmas.
We were busy inside, though, adding on a family room in the back and remodelling the kitchen.

We made some exterior changes over the next few years, including a new cedar roof, new landscaping, and a covered, gabled entry with some stately columns. 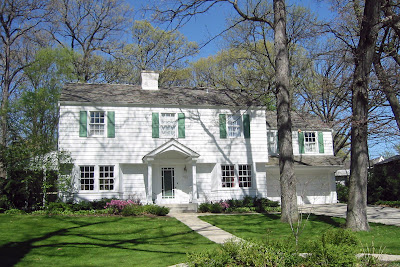 Then we decided to get fancy and replace our tired, old screened porch.  And the ever peeling cedar siding. And we hired our painters to do the whole job.  What could go wrong?
Here is the sagging old porch "before" it was torn off to make way for the Grand new porch: 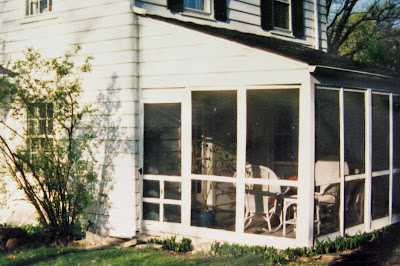 Here is our poor, naked house after the siding was removed.
The scary old black tar paper coincided nicely with Halloween and the Sox in the playoffs...
So basically, this was taken in the Fall... 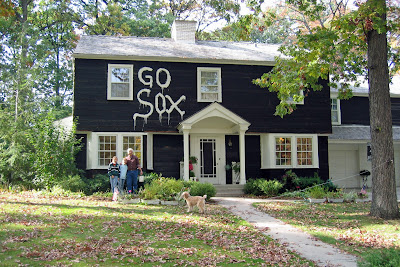 And here we are, the following Spring, still sans porch and siding... 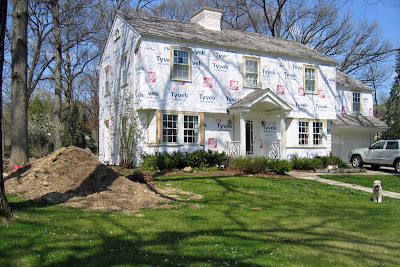 Time to get tough and fire the "painters".
We hired a great builder (Tom Phillabaum of Baumson Builders) who got things back into shape, pronto.  Here is an "After" photo of the house with the new siding and porch. 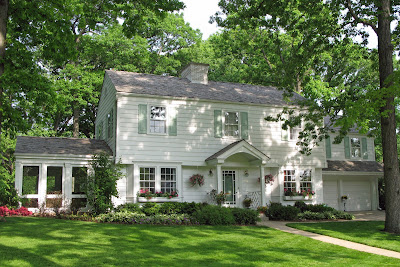 And here is an "After" view of the back of the porch...
We love it and we live out there, practically year round.
My sweet brother Paulie laid the stone path for us. 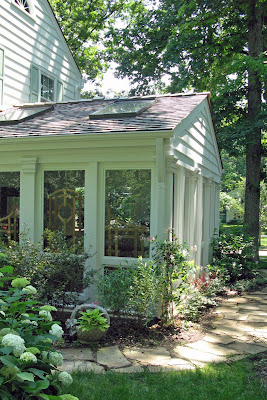 We have screens, too, but after we put the glass windows in that first fall, we have never put the screens back in again!  It stays clean and dry, cool in the summer from the shade of the oak trees and the whir of the ceiling fan.
Speaking of ceiling fans, I had this flea market chandelier hard wired into the ceiling fan in place of the standard light kit that came with the fan.  This little project was "no problem" for our trusty electrician, Brian AuBuchon. 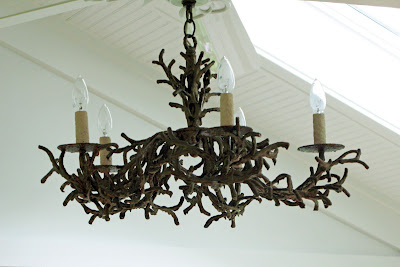 Here is an interior picture of the new screened porch, demonstrating the "Chandelfan" concept: 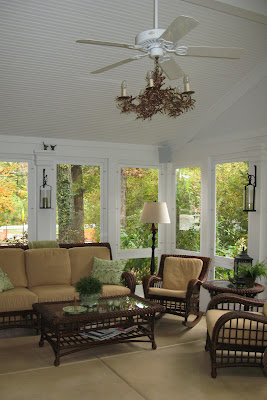 And, in the spirit of the season, one last photo -
you may recall this nightmare scenario - "The Spider that took Grand Avenue"!
It made the Glen Ellyn News, thanks to my pal, Julie "Dubs". 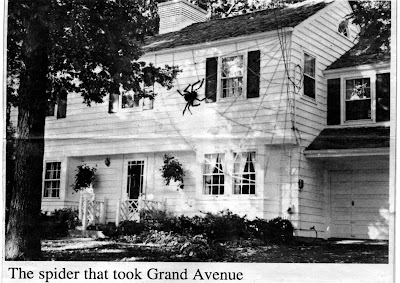 So, let me know what you think!
I will be featuring some sweet "Before and After" kitchen projects soon!
Linking to Savvycityfarmer