Been away...
Haven't seen you in a while
How've you been?
Have you changed your style?
(Thanks, Dave Mason)
Happy New Year!
I know, it has been a while since I have posted.
We were away, visiting family for Christmas-
over the river and through the woods to Grandmother's houses...
Hope you have all had a wonderful Holiday season.
I am ready to get this 2012 year started!
Here's a craft project I'd like to share with you.
Mr. Grand and I made sets of wine cork coasters for Christmas presents this year
and I think they were a hit.
In December, we had a lovely dinner with good friends at a Michigan winery
and we spotted coasters made from wine bottle corks in their gift shop.
Light bulbs went off and the project planning commenced.
I could not have made these without the help of Mr. Grand, as I am terrified of power tools...
Good thing he likes a project, too!
He was also invaluable in the acquisition of the wine corks! 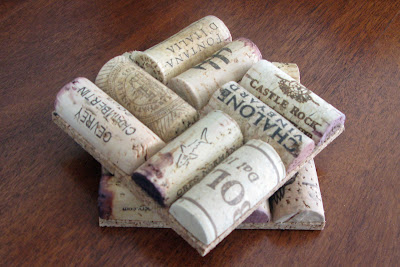 As Martha Stewart likes to say (and I like to quote)
here is "a small portion of my collection" of wine corks! 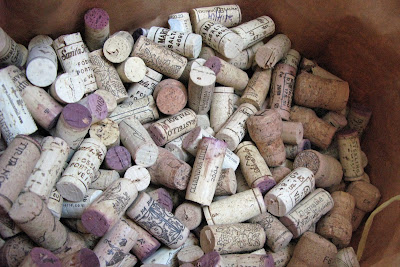 Now before you start to worry about our drinking habits,
I must tell you that these corks were scrounged collected over time-
from parties, restaurants and bars and friends who know we save them.
And the corks are still coming in...
Here is how we made them:
Supplies:
We bought 12" square cork bulletin board type tiles from Staples (about $9.99 for a package of four)
and some Elmer's Wood glue that holds up to moisture.
You will need at least four whole wine bottle corks per coaster.
There will be some waste as not every cork has two useable, coaster worthy halves.
We used a new blade in a box cutter to cut the cork tiles into 3 1/2" coaster size squares.
Sizes are approximate because the squares had to be trimmed to fit the assorted corks we used. 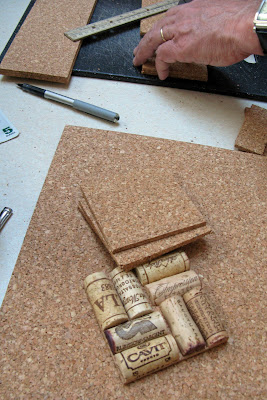 Mr. Grand cut the corks on his band saw and I "designed" the patterns and glued them together.  Believe me, there are lots of different sizes of corks - some are chubby, some are long, some are ugly, some even have phone numbers on them...  We did not use any plastic corks.
We tried to use the most interesting corks and we also tried to include corks from the favorite wine of the recipients too.  Friends of ours have a Vineyard in Michigan (How cool is that???) and we included corks from their wine as well as other Michigan wines on the set of coasters we made for them.
Here is the assembly line... 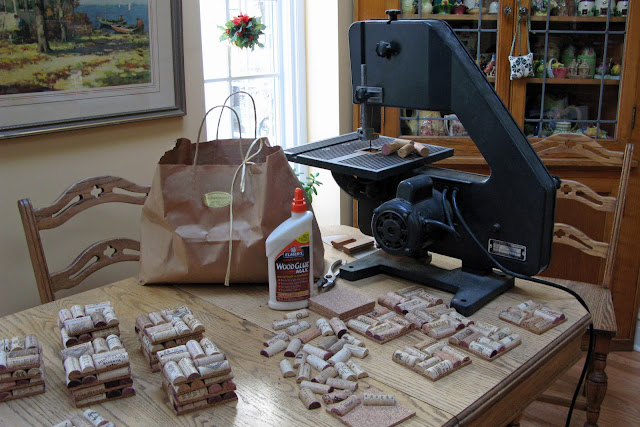 We were careful to cut the corks so that there was something interesting centered on them.
Here is the scary band saw used for slicing the corks in half: 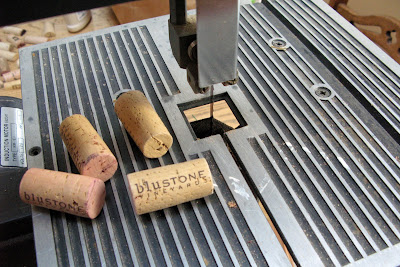 Here's a shot of the jig Mr. Grand made so that he could cut the corks evenly in half
and spare his fingers at the same time. The wooden part of the jig holds the corks snugly in place and the plastic putty knife underneath keeps them level while they are being sliced.
What can I say?  He's an engineer... 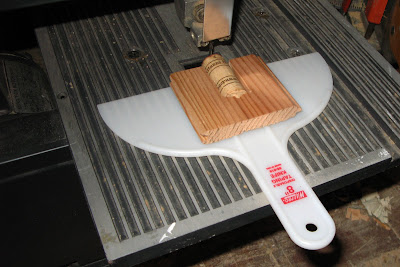 I assembled eight cork halves on each coaster until I liked the mix and the fit and then I glued them into place.  You can see in the very center of the corks below how we offset them a little to make them fit on a square cork coaster. 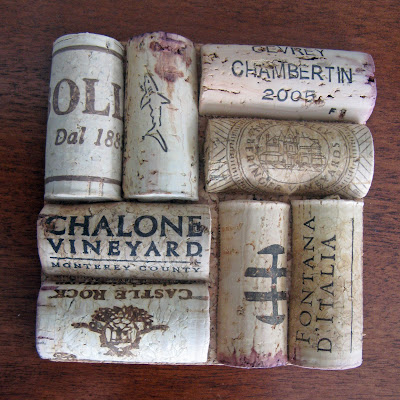 We liked the look of the red wine on the edges on some of the corks so I tried to put them on the outside whenever possible.  Then we trimmed them up a bit where necessary to get a neat square that fit the glued-on corks. They took several hours to dry.
Here are stacks of coasters, hot off the assembly line! 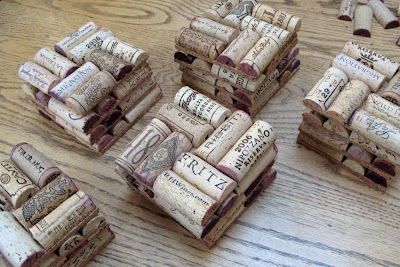 Each of the four 12" cork bulletin board squares made 9 coasters, so we were able to make
three dozen coasters from one package.
I liked the look of them wrapped up in sets of four. 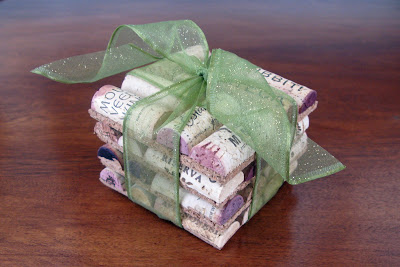 Here are the coasters already in use...  rather Grand, aren't they? 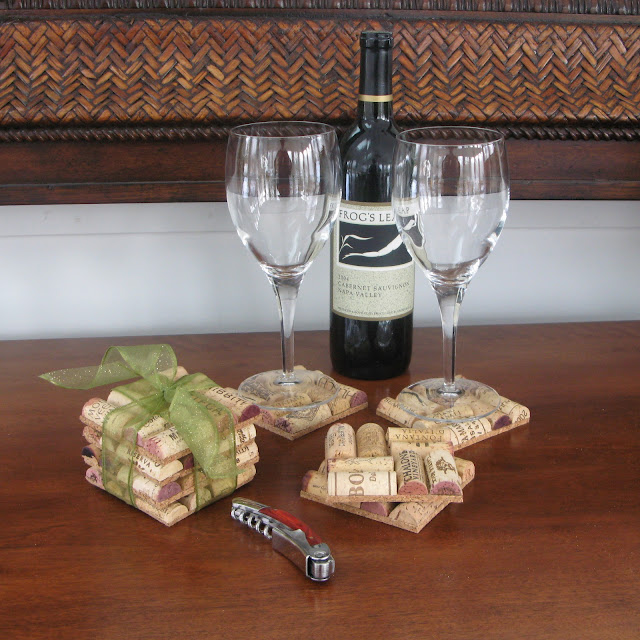 I think these will make great hostess gifts when we attend fabulous parties this year...
Hint, hint...
See you in 2012???

Linking to Uncommonly Yours