I have some magical new candles!

They are now lighting up our porch in the most enchanting way...
and the best part is that they are flameless candles (battery operated)
so there is no smoke, no mess, no fire risk.
I have four wonderful wrought iron hurricane candle holders out on the porch,
and it is porch season...
I used to have some pretty green wax pillar candles in the holders, but
-First World Problem Alert Here!-
They were kind of a pain to light... 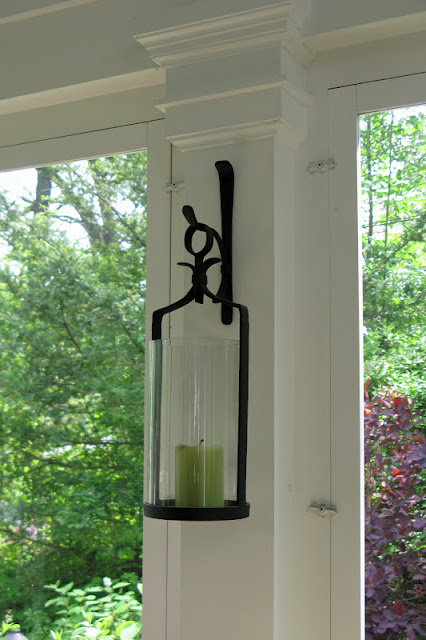 First you had to remove the rather fragile hurricane cylinders,
light the candles and put the cylinders back on.
Then you had to repeat the process to put them out, usually late at night,
with possible wine induced unsteadiness.
And, again, there are four of them.
The glass would get sooty from the candles, and fingerprints were visible too.
So, I rarely lit them, but they sure looked pretty...

I have been a fan of the flameless candles for a while,
and I kept looking for green ones with a remote control to light them up.
No luck on the green.
Mr. Grand, who can be quite ingenious, suggested that I get some white ones and paint them.
I ordered two sets of these from Amazon: 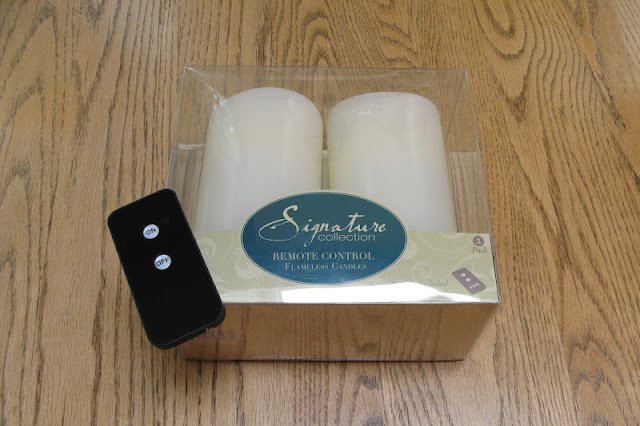 I put them in the candle holders, and as you can clearly see, they needed to be made green again!
They just really did not show up against the white. 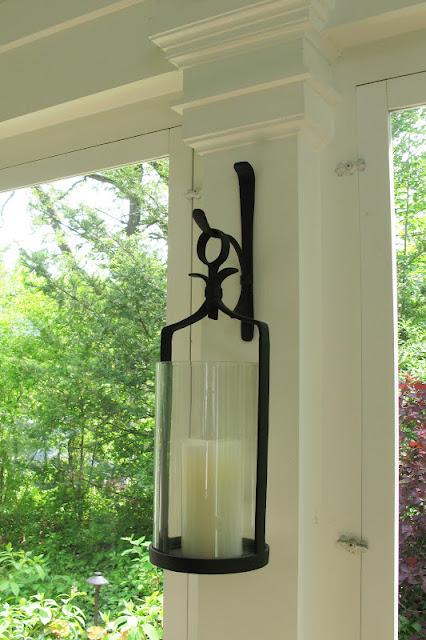 Time to get to work.
I didn't have the right color of spray paint, but I did have some pretty green cocktail napkins.
I tried Mod Podging them onto a candle and - what a mess!
Then I thought about buying some green spray paint,
but worried that it would make the candles too opaque and the candlelight might not show.
Then I thought of using some green vellum paper
I had stashed away in my scrap booking pile.
Perfect! 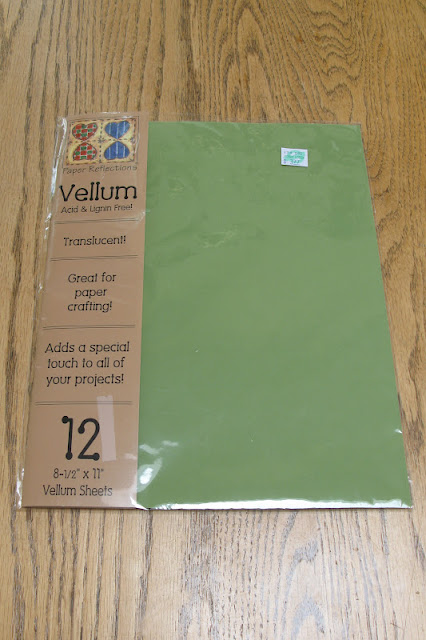 I rolled each candle in a piece of vellum paper
and put a tiny piece of tape on the seam so I could "scribe" the top edge.
I just crushed the paper sharply along the top edge of the candle
all the way around to mark a cutting line. 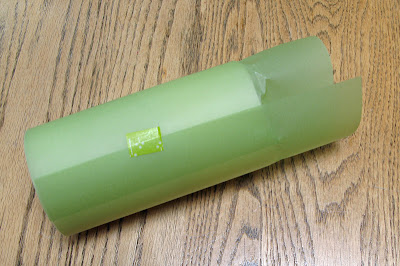 Then I took the tape off, flattened the paper again and cut just a little bigger than the line. 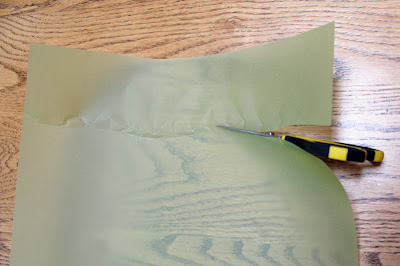 Then I trimmed very closely along the top edge of the candle. 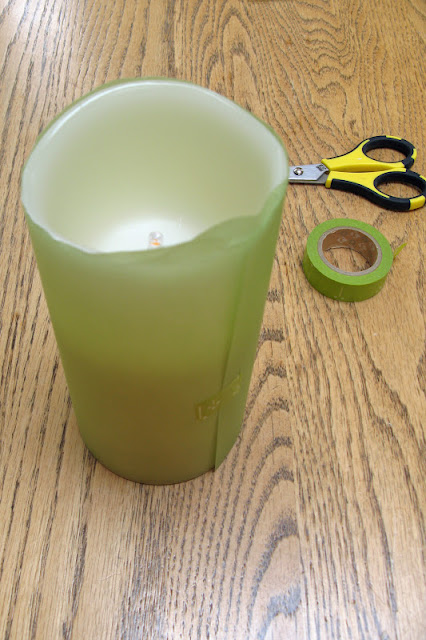 Then I taped the back with some of the new fancy scrap booking tape.
Not a very good color match, but it's in the back and will never be seen. 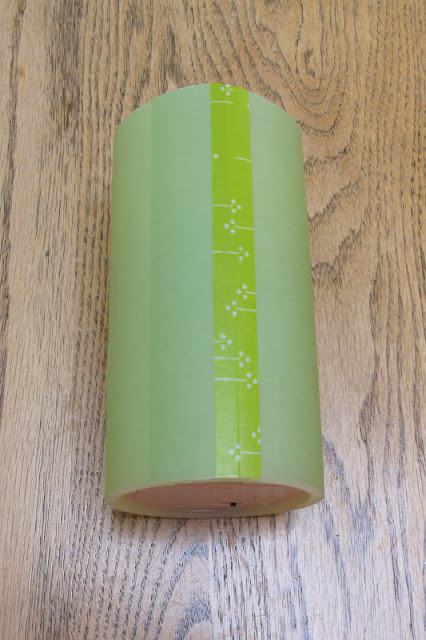 Here's a candle with it's new green sleeve,
nicely transparent. 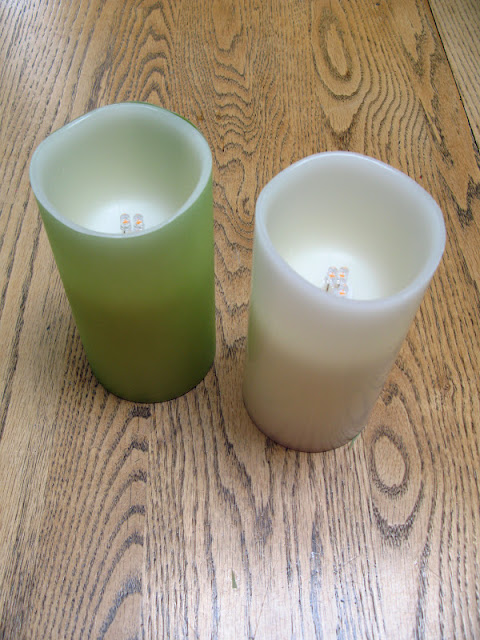 Here's one nestled in one of the iron holders. 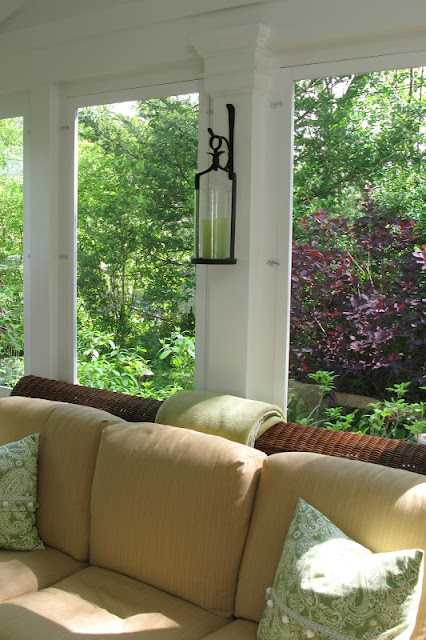 I could hardly wait for it to get dark that night.
The candles were in place, and I squealed with delight,
turning them on and off with the new little remote.
It worked like a charm.  Easy Peasy! 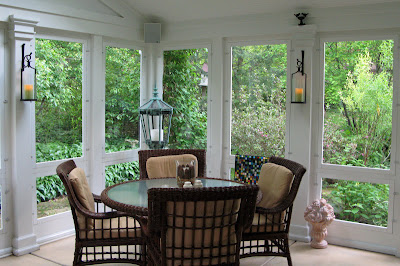 I think they look great!
And I can change the color easily if I want to get fancy
for the holidays or a party. 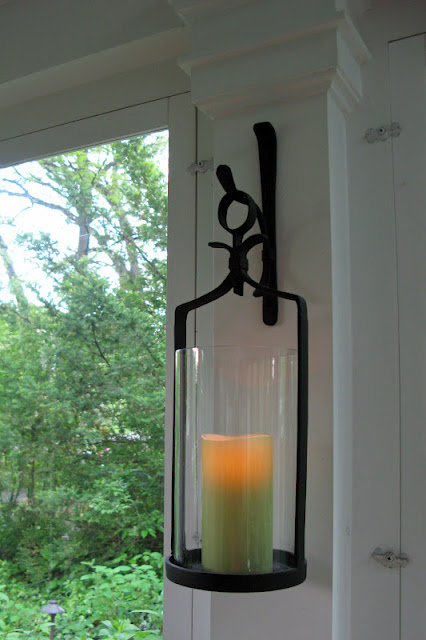 Thunderstorms were in the forecast, and Mother Nature delivered.
It was a great show. 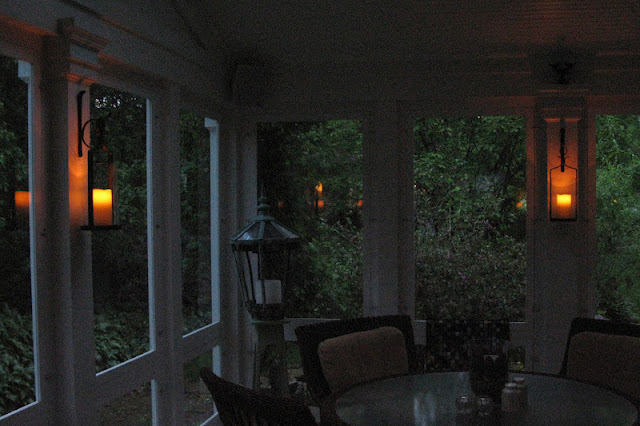 The candles flicker along with the lightning
and reflect off the windows, making it look like there are dozens of them.
Very sparkly and charming. 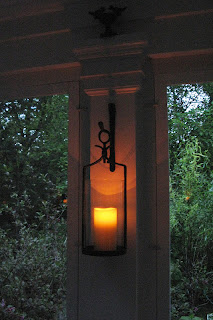 Linking to:
Metamorphosis Monday at between Naps on the Porch
Open House Party at No Minimalist Here
Masterpiece Monday at Boogie Board Cottage
TableTop Tuesday at A Stroll through Life
Tutorials and Tips Link Party at Home Stories A to Z
Nifty Thrifty Tuesdays at Coastal Charm
Wow Us Wednesdays at Savvy Southern Style
May Before and After Party at Thrifty Decor Chick
Feather Your Nest Friday at  French Country Cottage
Inspiration Friday At The Picket Fence
Flaunt it Friday at Chic on a Shoestring
Tickled Pink Fridays at 504 Main
Frugal Friday at The Shabby Nest
Vintage Inspirations at Common Ground
Weekend Bloggy Reading at Serenity Now
Grace at Home at Imparting Grace
Creative Things Thursday at The Vintage Farmhouse
Time Travel Thursday at Brambleberry Cottage