Long winter days seem to inspire me to make things.
I have half a dozen projects started
but not much finished yet.
I did make this Beaded Leather Wrap Bracelet ala The Sundance Catalog.
You can see those bracelets here.

They come in lots of variations and are absolutely gorgeous.
And expensive...

And I have a lifetime supply of beads that need to be used.
So I thought I'd try my hand at one.

This one below always called to me. 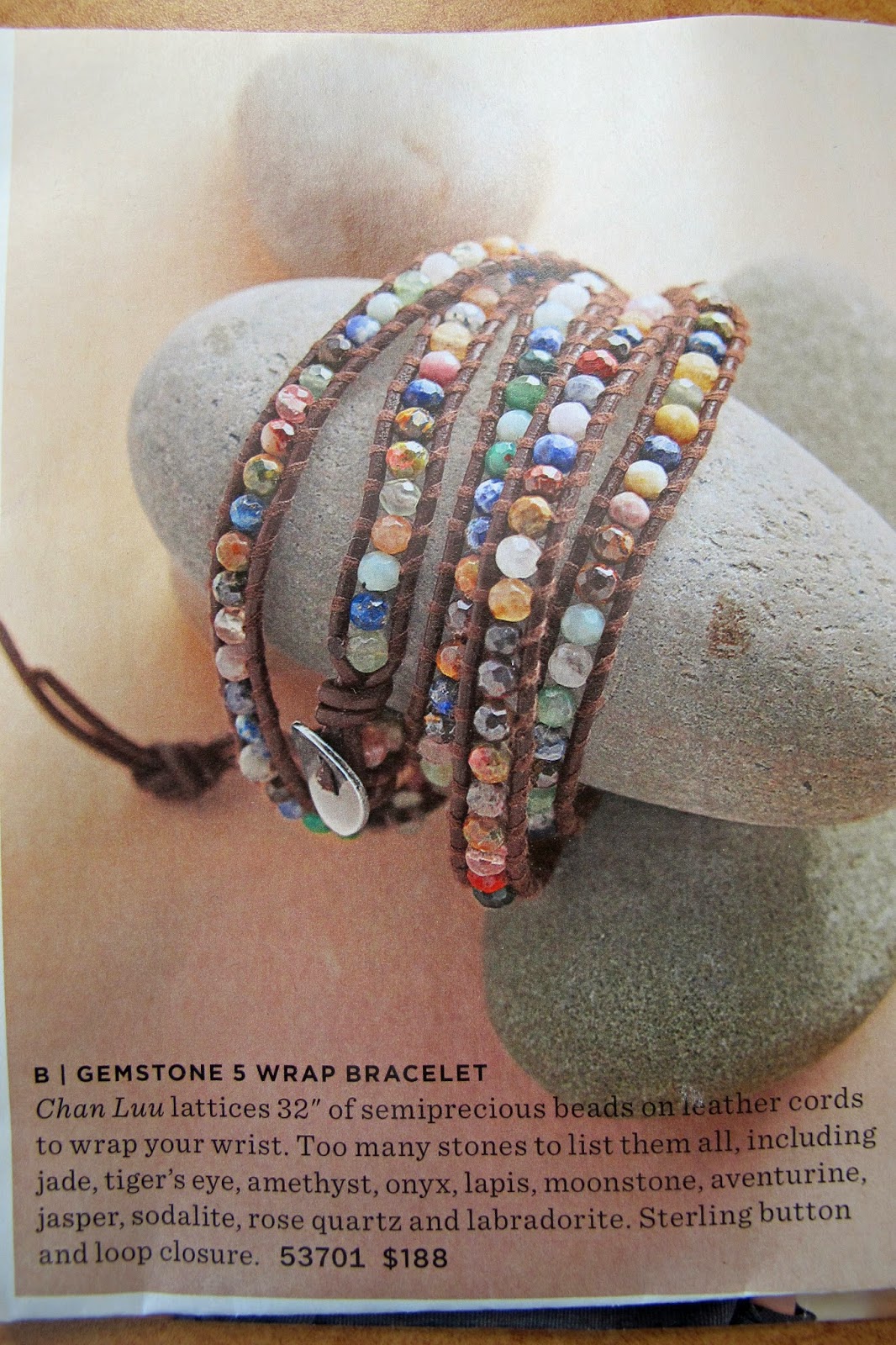 I love the multi-colors and the simple style. 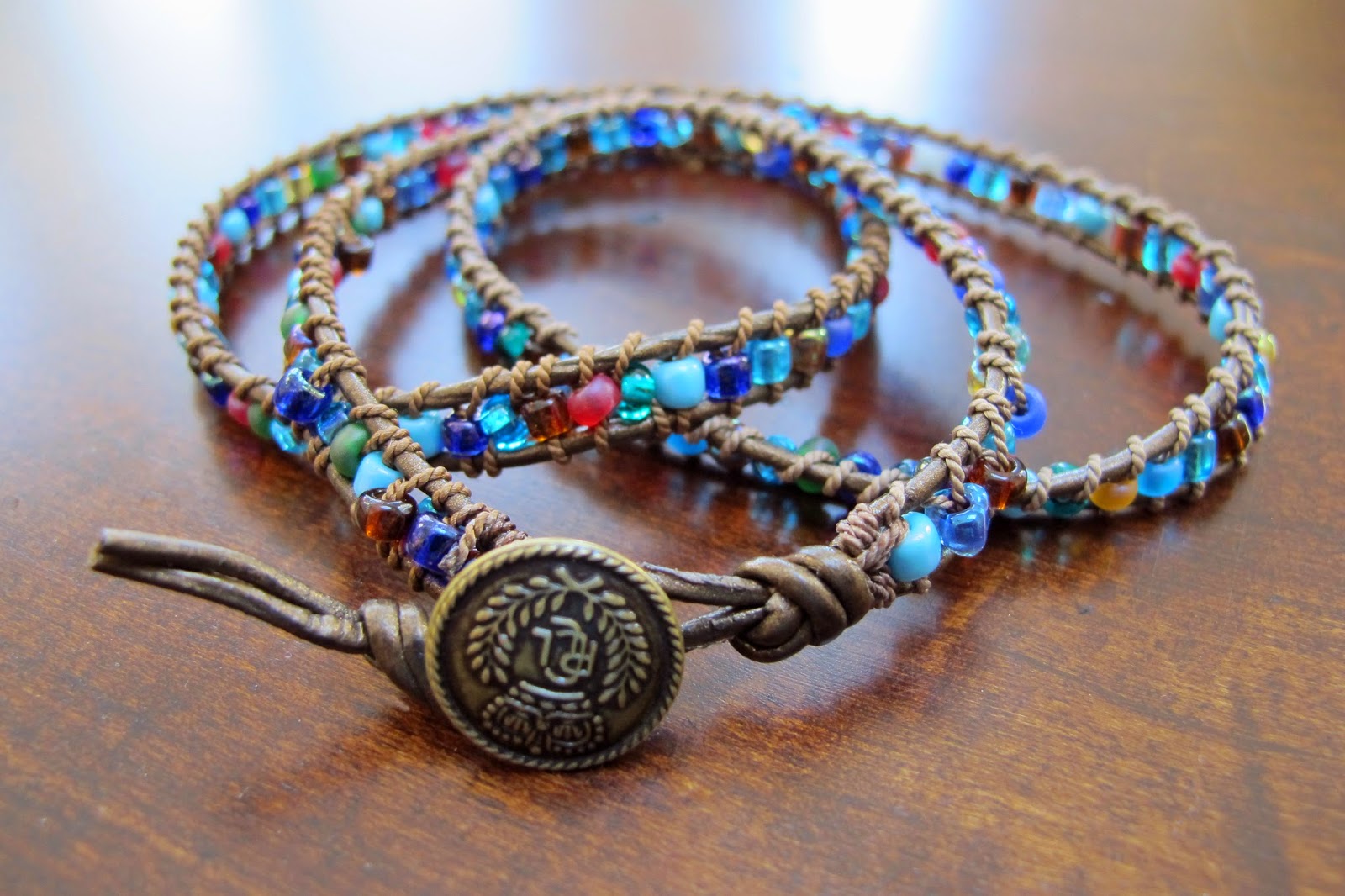 I love how it turned out. 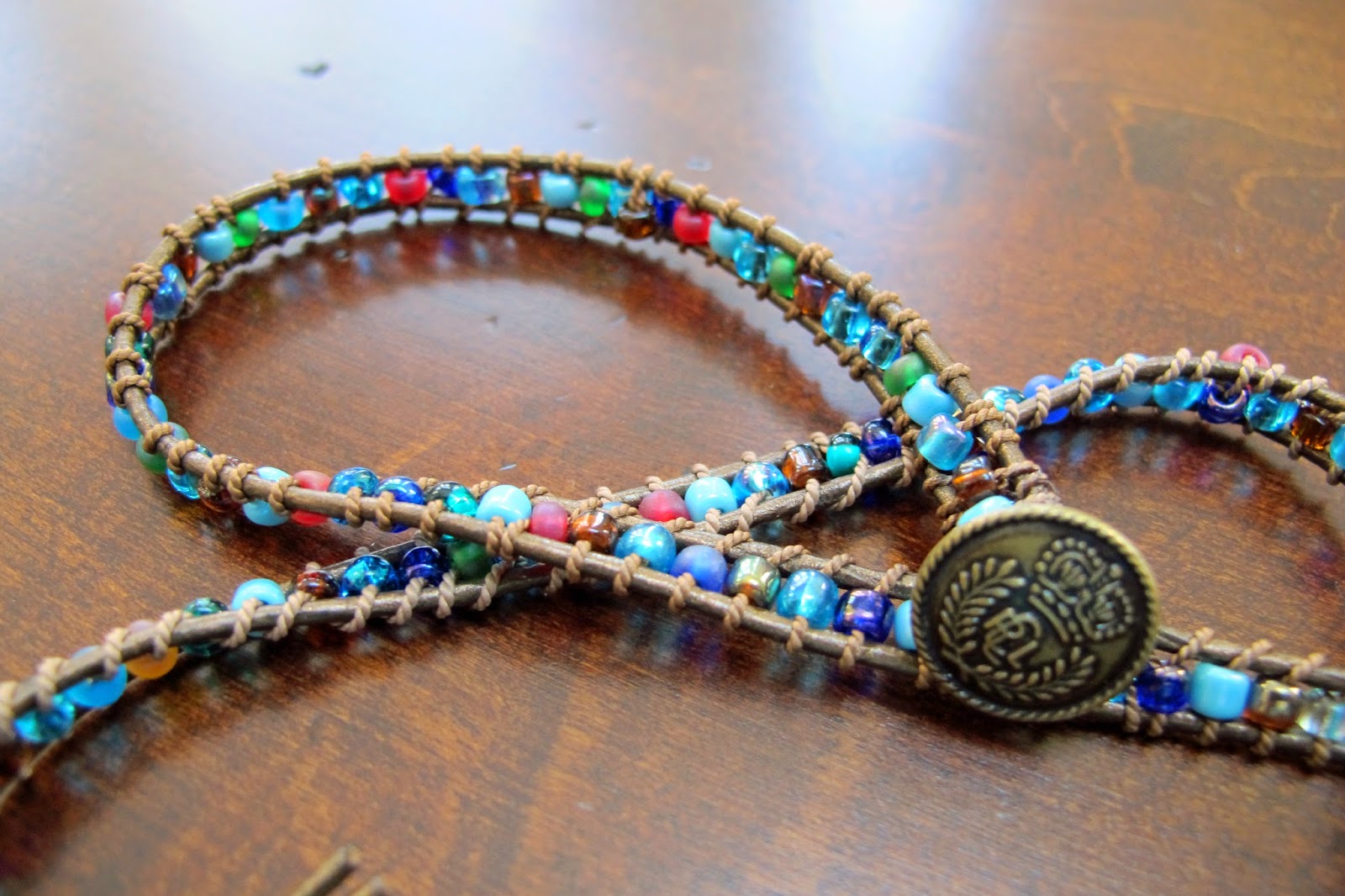 It's soft and comfortable and goes with everything! 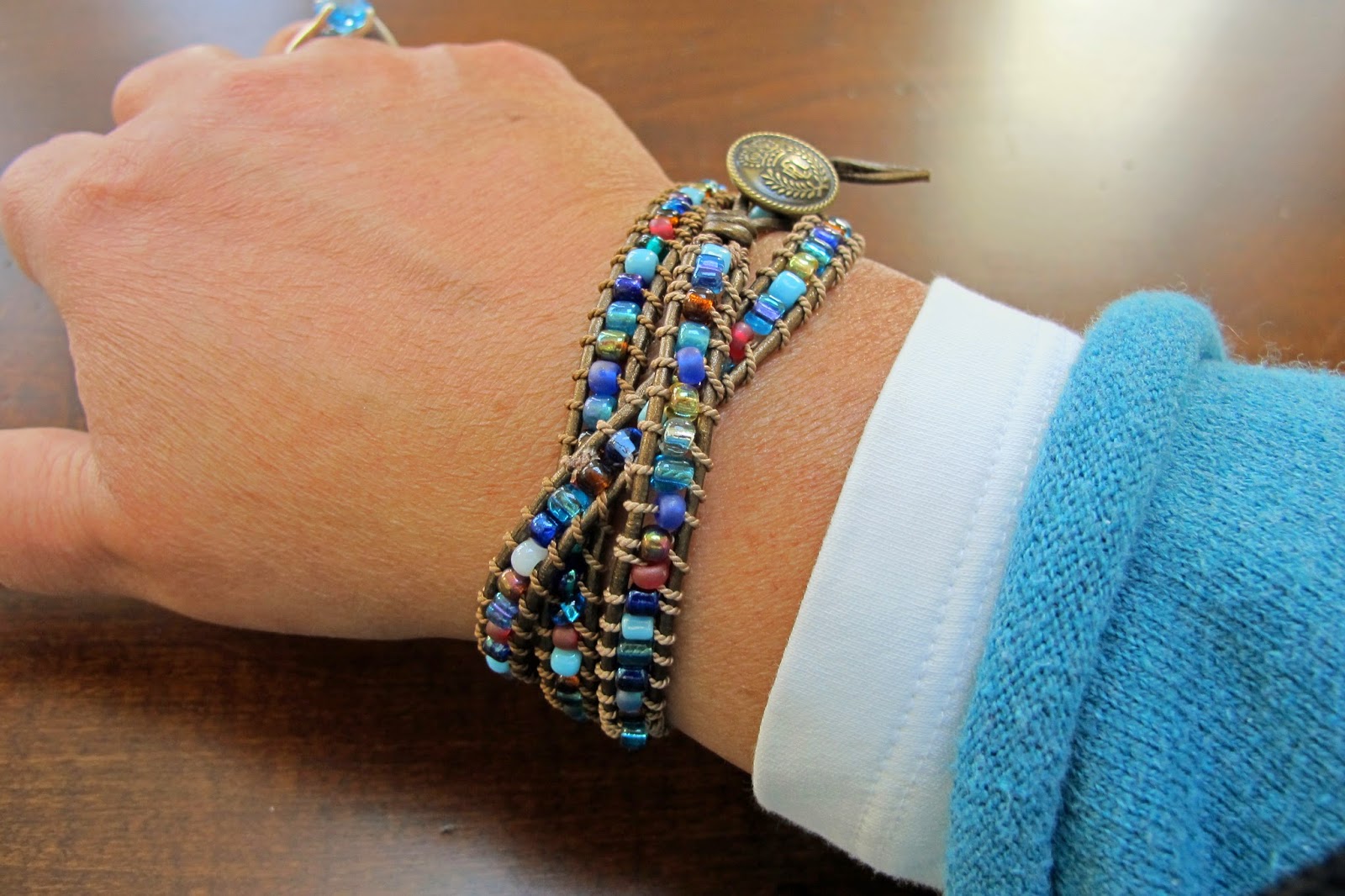 I made it a bit shorter that the one in the catalog, so it only wraps three times.
Seems like enough on my wrist.

Here are the supplies I used: 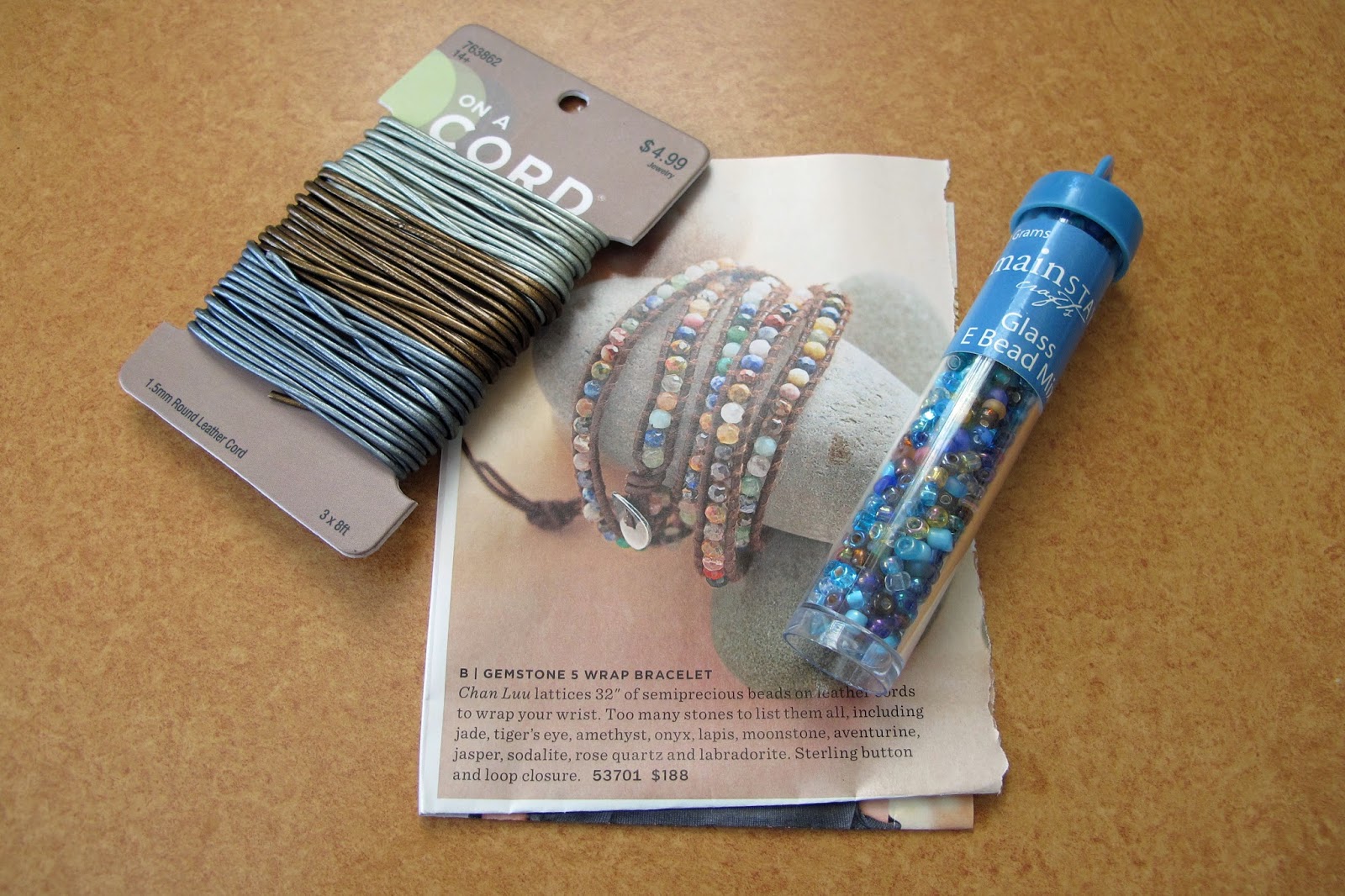 Leather Cord (1/2 off at Hobby Lobby and enough for three bracelets!),
Mixed glass beads in size E (1/2 off again),
and two cards of this Silk Griffin thread in size 10. 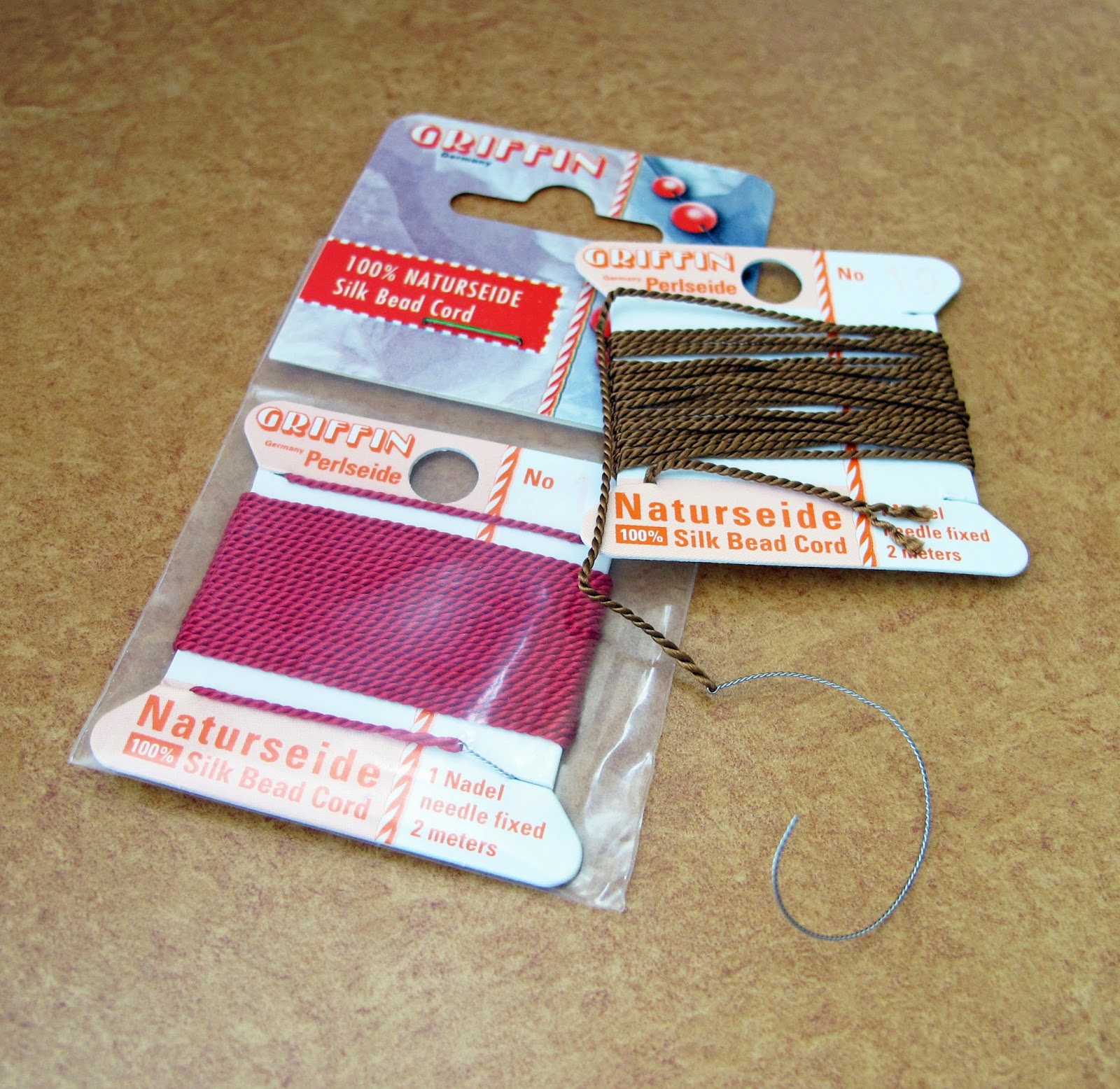 You can see that the Griffin thread comes with a needle already threaded
onto a length of about 6.5 feet.
That little silver curvy thing is the needle, and this is what's left of the second card.

Oh, and one button.  From my stash.

Total cost of the supplies - Maybe ten bucks.
Did you notice the price in the catalog???

If you want to make one of these bracelets for yourself,
there are endless YouTube tutorials about them.
This one is helpful:

It might be fun to make another one, maybe in various shades of the same color,
like this one, that you can buy on Etsy: 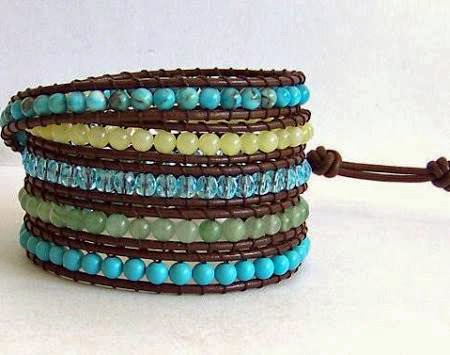 The possibilities are endless! 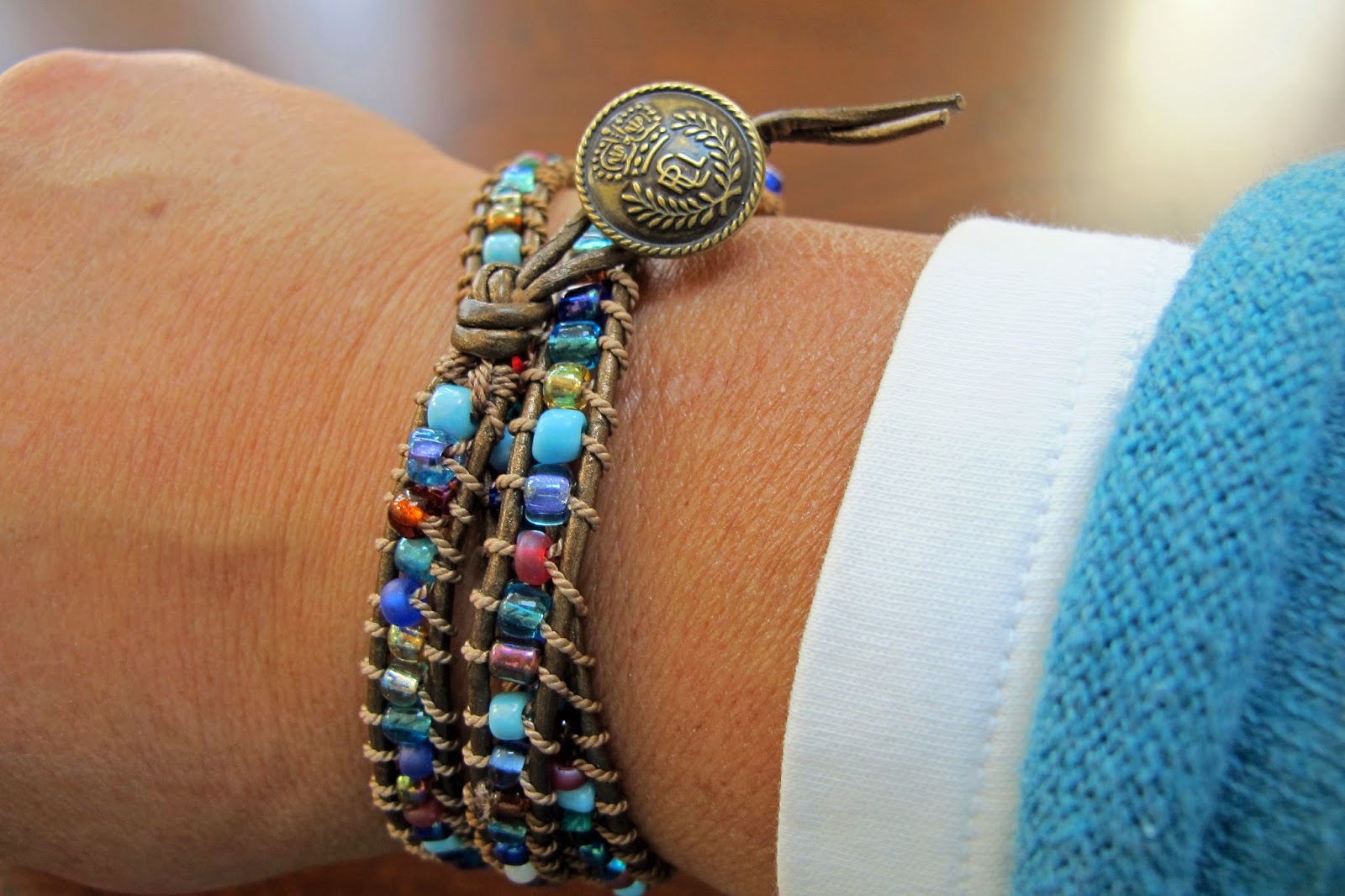 What are you doing on these long winter days?
I'd love some more ideas!!!


Linking to:
Metamorphosis Monday at Between Naps on the Porch
Inspire Me Tuesdays at A Stroll Through Life
Wow Us Wednesdays at Savvy Southern Style
The Scoop at Stone Gable


Good things have been happening at the little cottages in Michigan...
Slowly but surely, our friends' cottage next door is being transformed.

You can read about the cottages here...

I've been helping them plan the renovations and it's going to be wonderful.

Here's the cottage in September, before any renovations had begun. 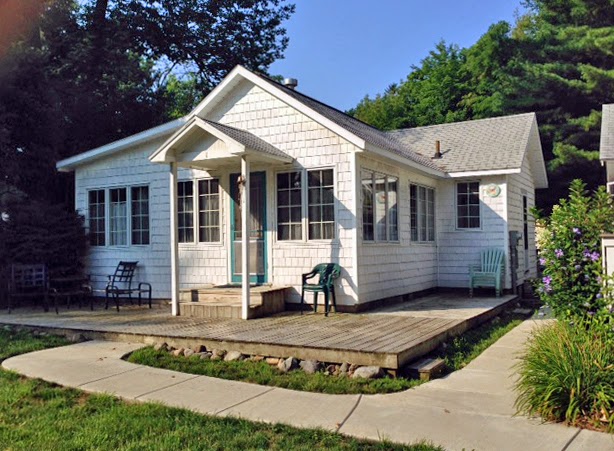 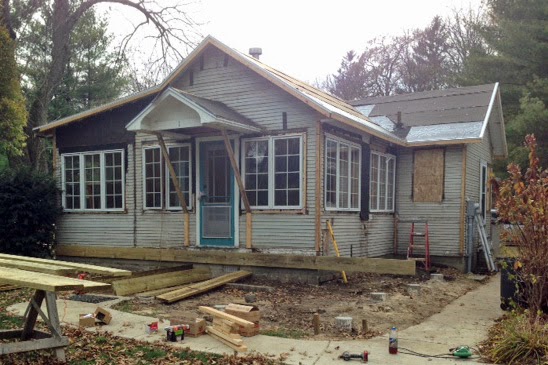 The deck and siding and roof had all been removed. 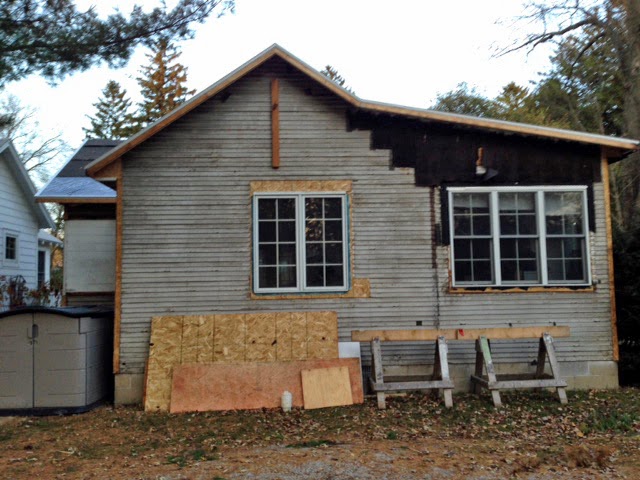 And the inside had been gutted too,
to allow for upgraded electric and plumbing and changes in the layout. 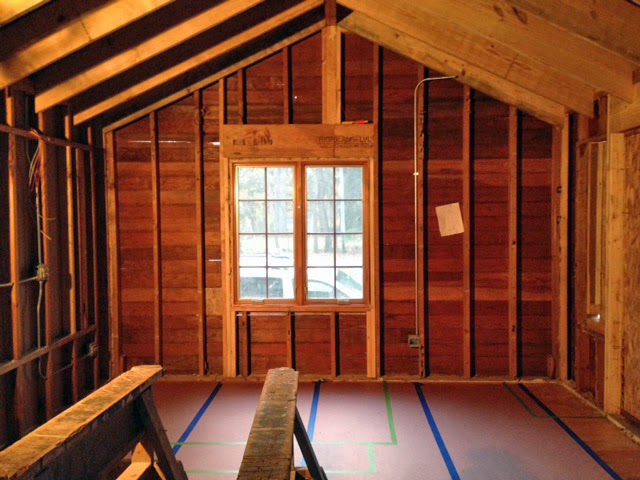 It's been a long, cold, snowy winter and progress has been hard.
But it is happening and here's the proof!

New roof, skylights, siding, columns, some new windows
and a beautiful new cedar deck
that has been raised to the same level as all of the other cottages.

You can see the corner of our deck on the right.
Imagine how wonderful this will look this summer
when it's been landscaped! 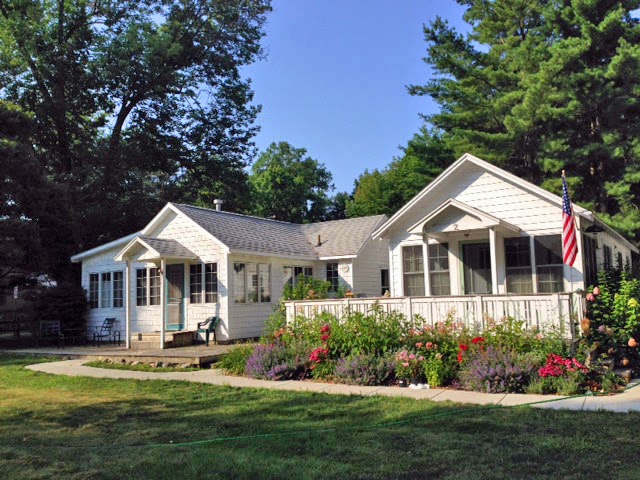 There was never anything planted by the old deck, on the left in the photo, above.
You can see the rocks placed around the edges to discourage critters.
That was it.
It's going to be gorgeous when the new owners get it planted.
I think they like flowers (almost) as much as I do!

And look at the back of the cottage now! 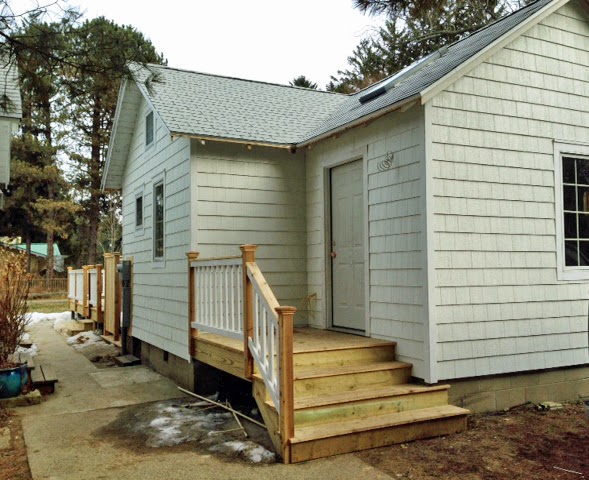 A charming new deck has replaced the old plastic shed that greeted us before. 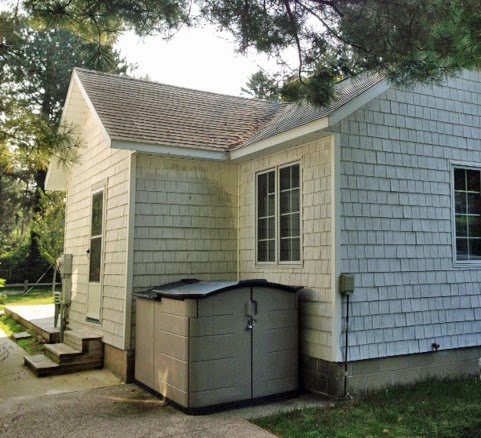 And see that side door above?
The stairs to it were 18" apart from ours!
Eighteen inches!!!!
You can see how it was set up before in the photo below. 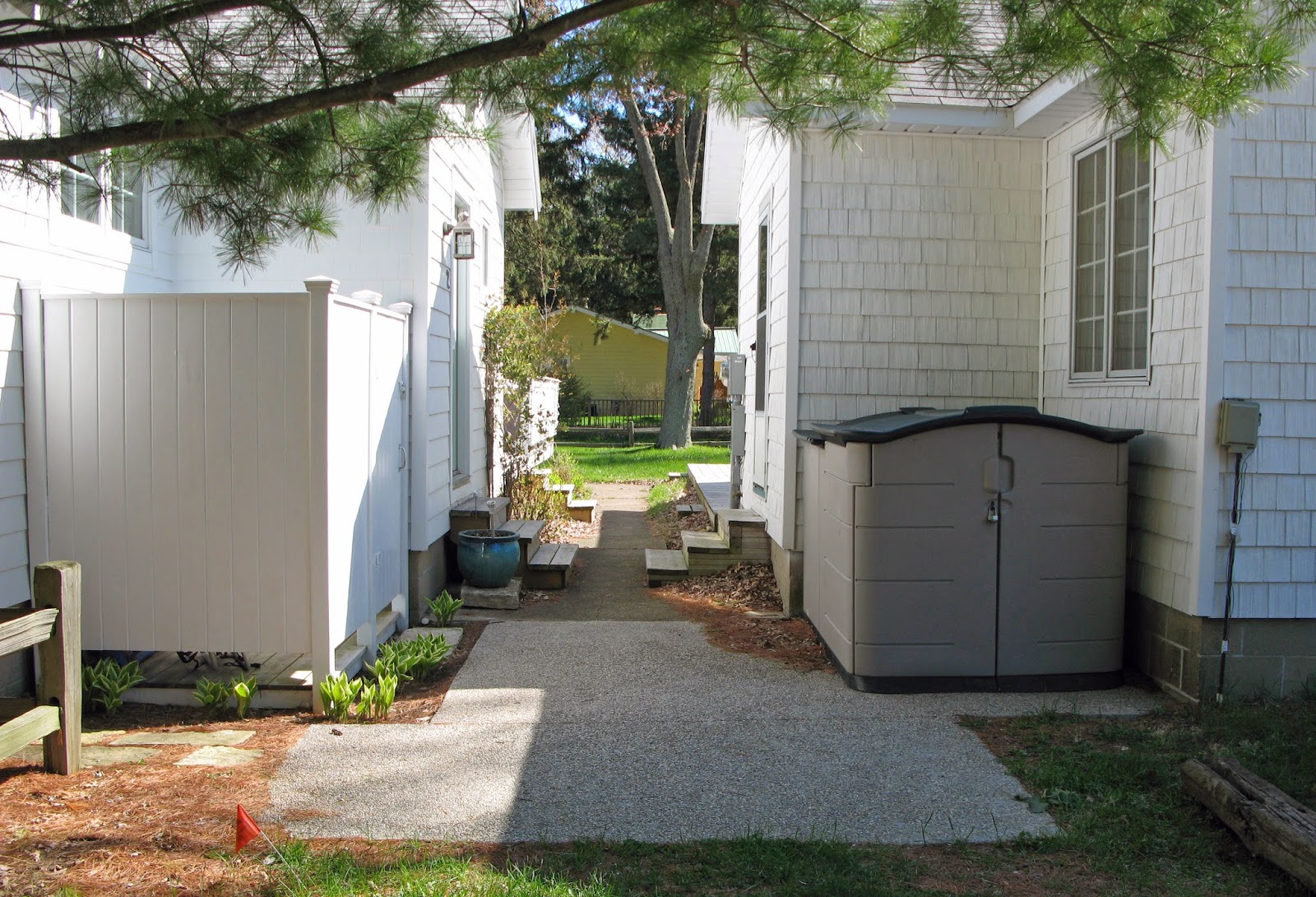 Now the door has been relocated to the new back deck 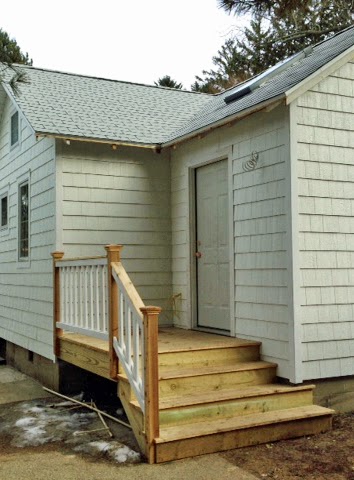 and the old stairs are gone.
(that's a temporary door above, until the new doors are installed)

The pathway is a little wider and safer, too. 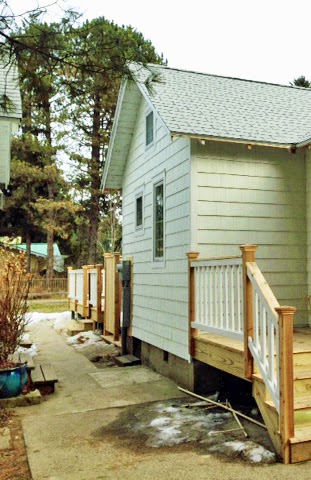 You can see that three new windows were added on the side where the old door was.
Now there is trim, too, around all of the windows and doors.
It's a subtle change, but it adds dimension and charm.

And you can catch a peek at the new outside shower in the photo above, too!
(We love our outside shower.  You can read about it here.)

The new shower is nestled into the side of the cottage 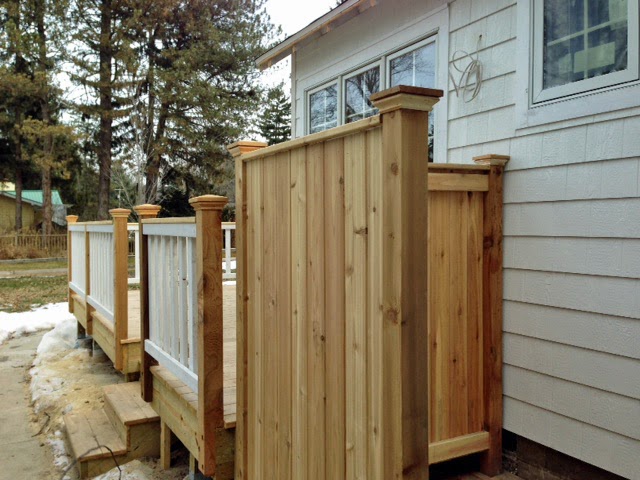 in a place where, sadly, we used to store our extra green chairs. 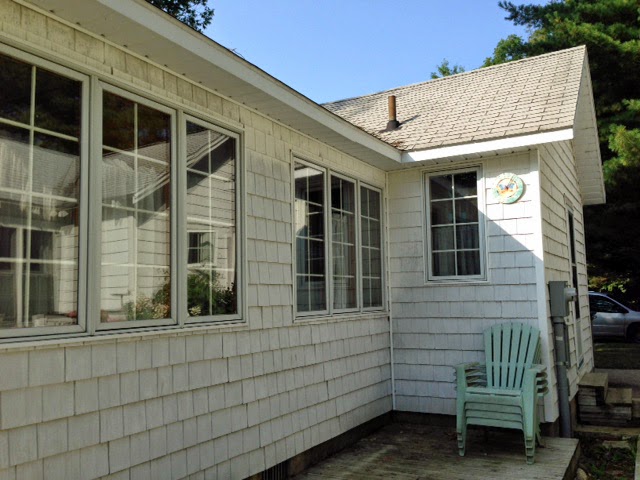 Not sure where they will be going, but I'll think of something!

Smaller, higher windows were added for privacy.
And a built in gas grill will fill this corner of the new deck. 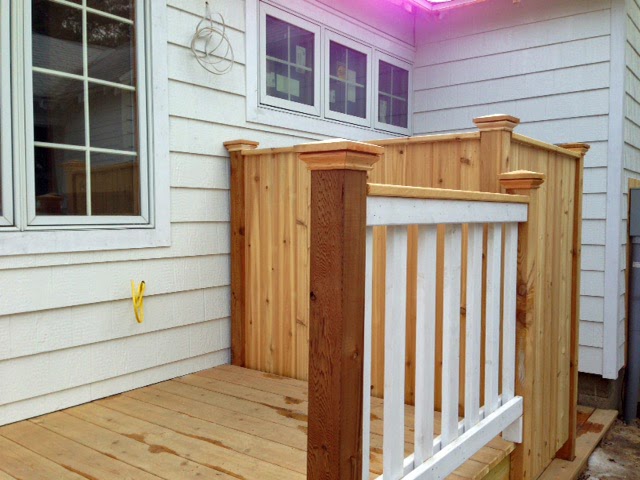 Here's a photo of our shower, to give you the general idea. 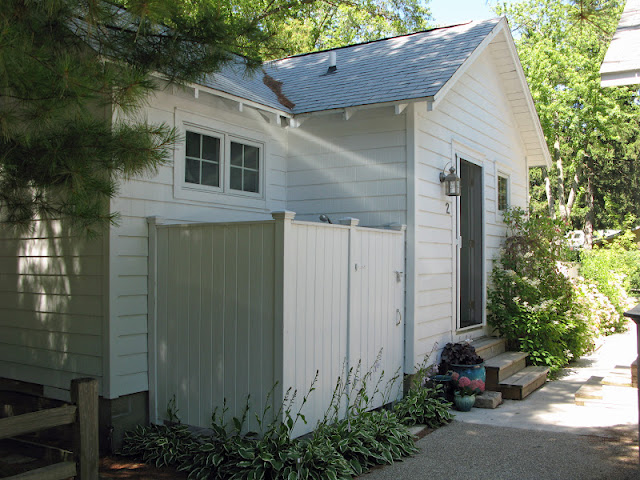 They are going to love it!

Again, here's the before picture of the front of the cottage, in November...

And now, still in progress, but so much nicer!

I foresee many lovely evenings together on this deck!

The back of the cottage, before...

Can't you just see a little bench on the deck
and pots of flowers spilling down the stairs?

And a flower box on the window on the right?

And hydrangeas below?
Just Grand.

The inside of the cottage is in progress, too.
New kitchen cabinets arrive in March
and the bathrooms are also being redone.
Then, on to the decorating and landscaping.

I found this canvas sign recently at Hobby Lobby
and hung it in our cottage... 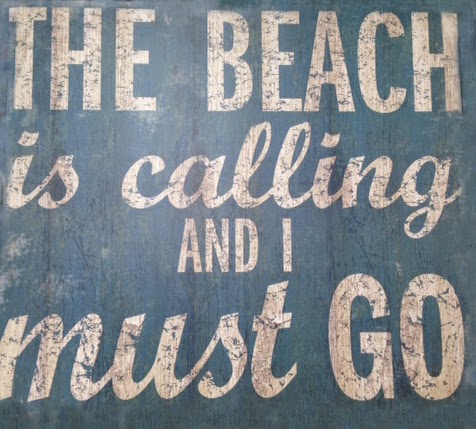 We had plans to go this weekend to check on the progress
and to get a little beach fix,
but the Mother Nature had other ideas.
A fierce lake effect snowstorm closed the roads and kept us home.

For now, we can only dream about days like this... 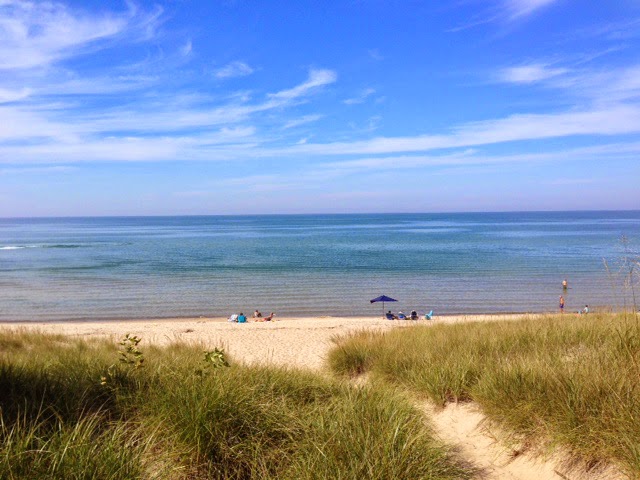 Linking to:
Metamorphosis Monday at Between Naps on the Porch
Inspire Me Tuesday at A Stroll Through Life
Wow Us Wednesdays at Savvy Southern Style
Feathered Nest Friday at French Country Cottage

Posted by Erin~Just*Grand at 3:14 PM 3 comments