For all of you Downton Abbey fans,
here's something fun to do in the endlessly long off season- 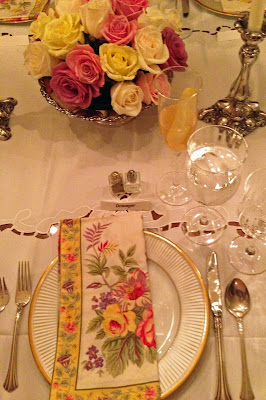 Some very fun friends of ours came up with the idea
and we all jumped at the chance to attend.

We brainstormed about the party...

I put the fix in to be an Upstairs Character right away...
We drew names to play the characters and some side deals may have taken place.

I managed to wangle a seat at the Table as the Dowager!!!!  Score!!!
I just knew I could sit around, making cutting remarks and being waited on like royalty.
I excel at that, really.

Alas, Mr. Grand drew a downstairs character, Carson, the Butler.
And because he was travelling, he managed to fly into town at 4:00 pm the day of the party.
Which meant that even though I was an aristocratic Upstairs Character,
I would be forced to prepare his assignment, Deviled Eggs.
So unfair.  But I prevailed and managed to both boil eggs and spray paint my hair silver
and Mr. Grand managed to throw an awesome costume together...  You'll see.

It was a wonderful evening,
and our hosts, Mr. Matthew Crowley and Mrs. Patmore 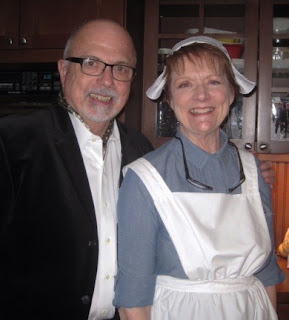 deserve major props for both the meticulous planning and the flawless execution.
Brilliant!

The French 75's were dangerously delicious! 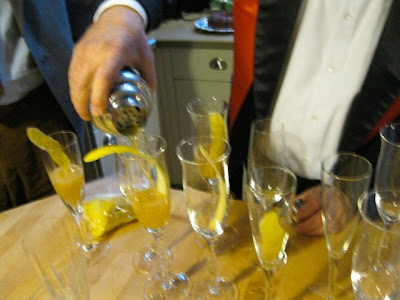 Named after a World War I French gun with "a vicious rate of fire",
they were quite tasty.
Ours were made with brandy instead of gin
and very elaborately presented by Thomas (Barrow)
who sported a rainbow bow tie, because, you know....
he's that Thomas... 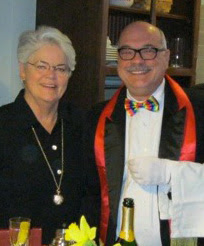 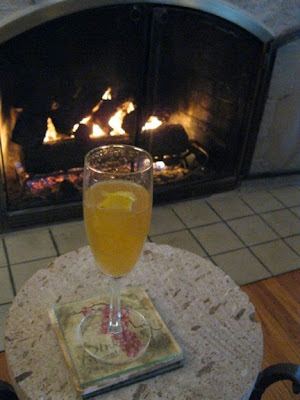 Fortunately, Dr. Clarkson was able to join us for the evening,
in case anyone developed the "Vapors". 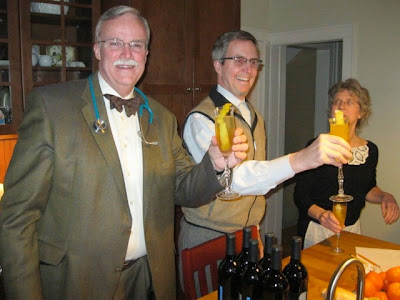 He's seen here with Lord Robert Crowley, The Earl of Grantham,
who just popped in from a day of hunting
while O'Brian eyes them maliciously and tries to sneak off with a drink... 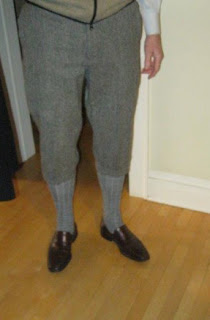 Tom Branson, the ex-chauffeur, brought this fabulous pocket watch
a family heirloom that dates back to the early 1900's. 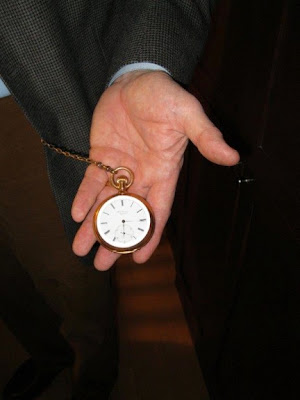 Lady Cora, the lovely Countess of Grantham, in her heirloom jewels
being attended to by Mr. Carson. 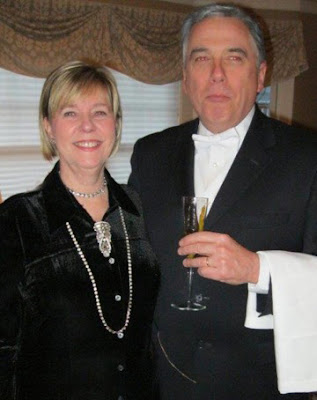 On to The Dinner. 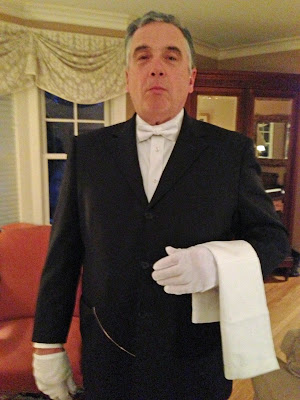 and served a wicked Deviled Egg... 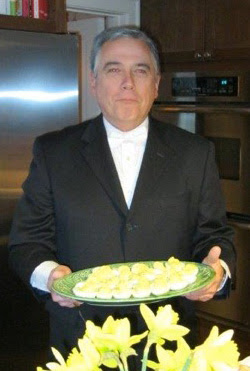 Again, it's my Blog
and if I seem partial to Carson, it's because I am,
and so there may be a few more pictures of him than anyone else...

Lady Edith looking a bit aghast about something. 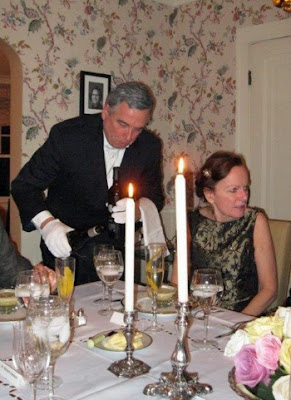 The Nottingham Soup was simply scrumptious.
(Recipe at the end of this post, courtesy of O'Brian) 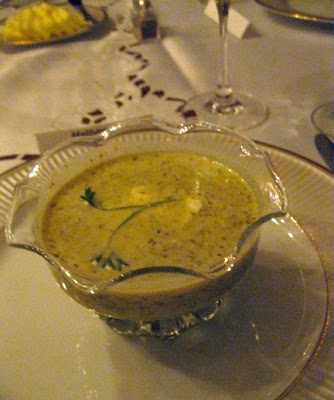 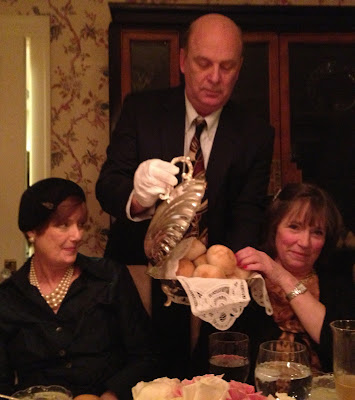 It should be noted that Lady Mary made her dress
from the most elegant window treatments,
ala Scarlett O'Hara. 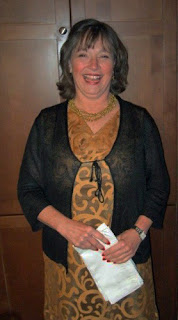 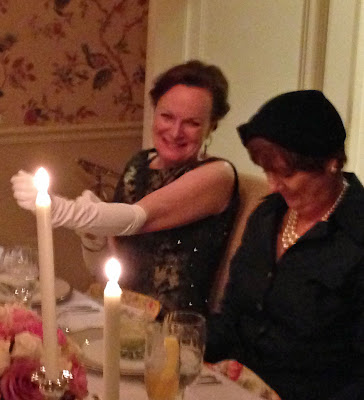 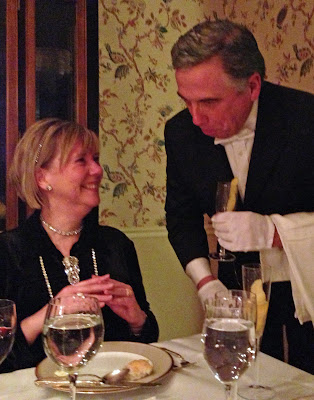 And then serves Tom Branson, perhaps not to his satisfaction...
Uppity chauffeur! 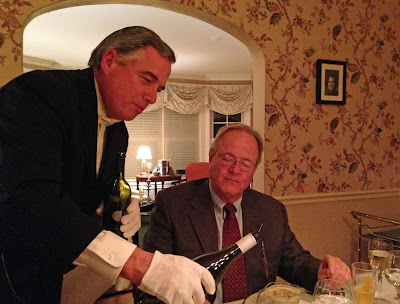 As usual, the help simply cannot confine themselves to their proper places. 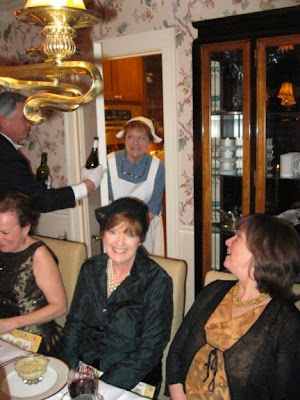 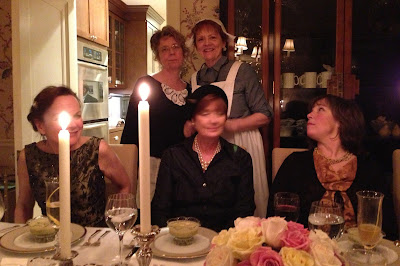 The Dowager did develop a bit of the "vapors"
and was promptly attended to by Dr. Clarkson.

This picture is very small for a reason. 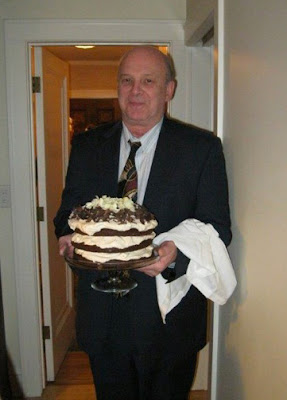 After Dinner, we "went through" to the Parlor,
where we there was major merriment
with a musical number from Season Two-
"If I Was the Only Girl in the World".
Remember when Mary sang that song as Matthew walked into the room?
Swoon. 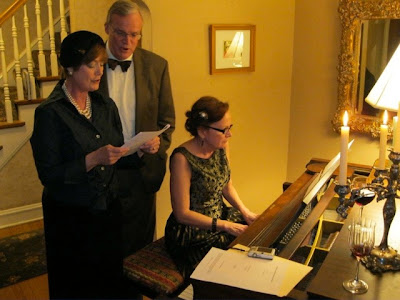 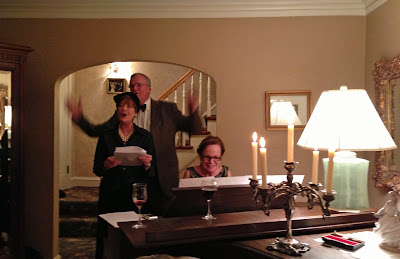 That's my Mom's Candelabra on the piano.
She would be so pleased!

We played Parlor games
including Reverse Charades,
where the team stands up and acts out the idea together 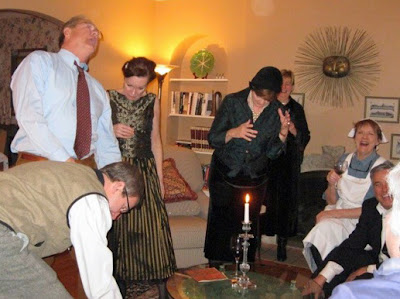 and one member does all the guessing-
Carson in this case, while Mrs. Hughes holds the card. 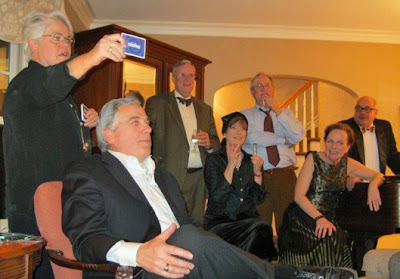 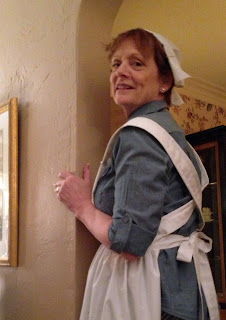 while Thomas and O'Brian are off sneaking a smoke
and doubtlessly planning something evil to do with bars of soap. 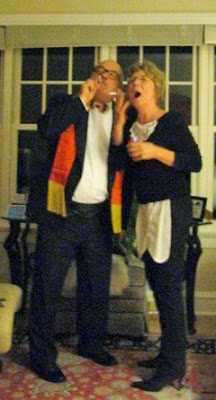 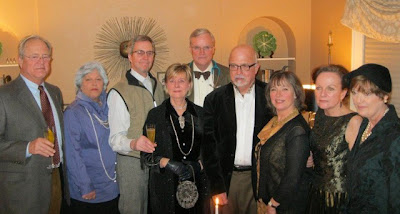 And the Downstairs Crew 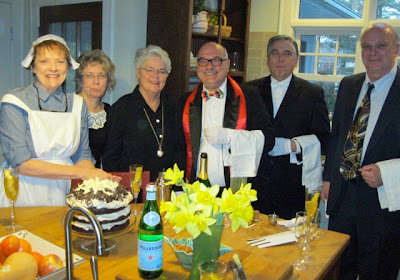 A most Enchanted Evening! 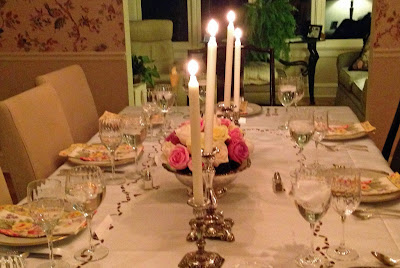 Thank you again to our most generous hosts
and to the entire cast for all of their delightful efforts
(and some of their photographs).

Recipes on the menu above have links where highlighted.

This one is from O'Brian's kitchen...

Add above ingredients to onion mixture,
cover and cook for 10 to 15 minutes or until broccoli is very tender.

Remove the bay leaf.  Add the spices and puree the soup in a food processor or blender.

You may prepare in advance up to this point.  Cover and refrigerate for up to two days.