We went to an Oktoberfest themed party tonight and I was asked to bring a dessert.
Hmmm.  What kind of dessert should I bring?
I decided that Black Forest Cake would be fun.
I have never made one before, and have probably only tasted it once before in my life.
But I knew what I wanted it to taste like - Cherries and chocolate - Mmmm!
I wanted to make a layer cake and have glossy cherries on top
and I wanted to use the Mascarpone icing I used for my Tiramisu Cake.
I have been craving that icing for a while now,
and this seemed like the perfect opportunity to make it again,
and to experiment with piping it on a cake.

Once again, I researched recipes for Black Forest Cake
and for Chocolate Cherry Cake on the web,
and once again, I couldn't find exactly what I wanted to make.
But I am still grateful to all of the cooks who post their recipes on the internet,
because I used parts of several different recipes to get it right. 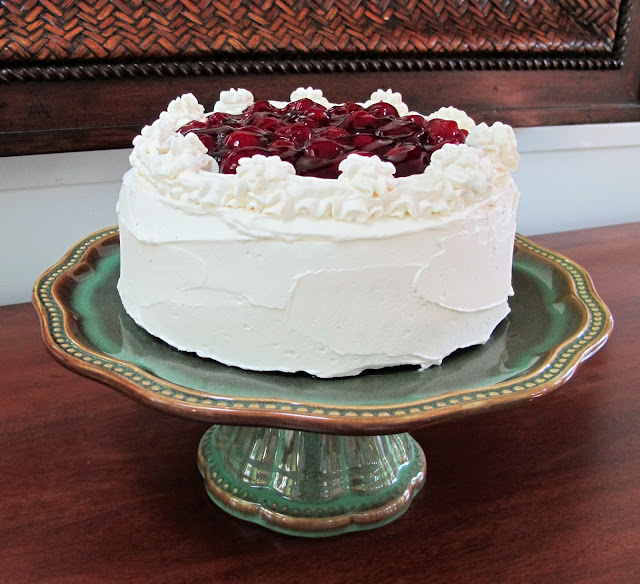 There are three easy parts to making this cake.
The cake, the chocolate ganache and the icing.
Oh and you have to open a couple of cans of cherry pie filling....

I started with the basic cake from this recipe for Chocolate Cherry Cake III from Allrecipes.com.
It's a dump cake - you start with a cake mix and you add things to it.
This recipe makes a single layer cake in a 9" x 13" pan.
I might try this version sometime- it would be quicker...
But for this party, I wanted to make something prettier- a layer cake with a little more WOW.

Here's what I decided to do:
I used a chocolate fudge cake mix, added two eggs, 1/2 cup vegetable oil
and a teaspoon of almond extract.
I mixed all that together and then folded in one 21 oz can of cherry pie filling,
stirring until the cherries were just barely mixed in.
My internet "Research" told me that gently adding the cherries at the very end
helps keep them from sinking to the bottom of the cake.
I poured the batter into two greased 8" cake pans
and I baked them as directed on the box.

While the cakes were cooling, I made the Ganache from the Allrecipes recipe above.
Don't skip the ganache... It adds a layer of rich chocolate deliciousness....
I heated these together:
1/3 cup of milk (I used almond milk, because I had it and I liked the almond taste it added)
5 TBSP of butter and
1 cup of sugar over medium high heat.
I let this boil for a minute or two, stirring constantly, til the sugar wasn't grainy any more.
Then I removed it from the heat and added 1 cup of chocolate chips.
I stirred this until the chips were melted and the mixture was smooth.

I removed the cakes from the pans and set the first layer on the cake stand.
Then I poured the chocolate ganache over each of the two layers of cake and spread it to the edges.
I let these sit so the ganache could harden a bit while I made the icing.

Here's the first layer with the ganache. 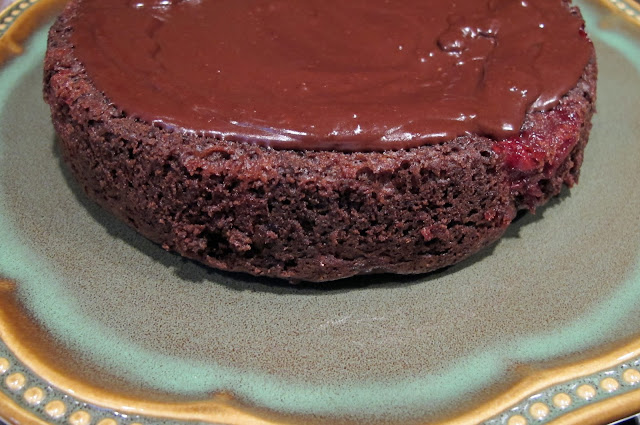 The next step is to make the Icing.

The icing is ridiculously easy.  And soooo delicious.
You can read about it here.
Double this if you want to ice the whole cake. 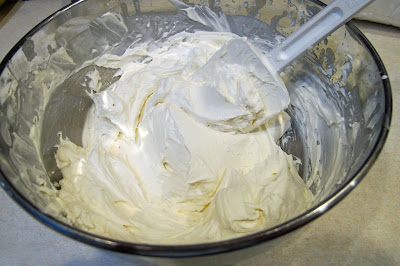 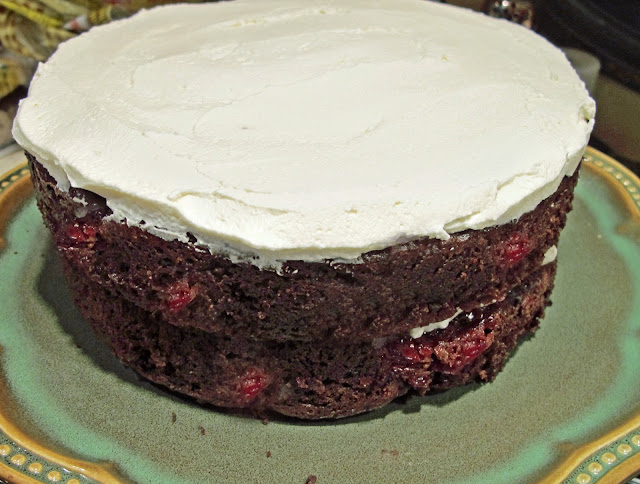 I could have stopped here- it's pretty enough and less fattening-
but I wanted to make it a bit fancier- so I decided to ice the whole cake.
I had to double the icing to ice the entire cake, but I think it was worth it.

I made a border of piped icing on top to keep the pie filling in place. 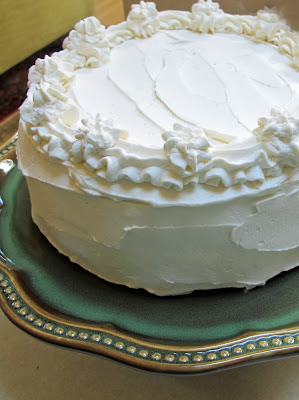 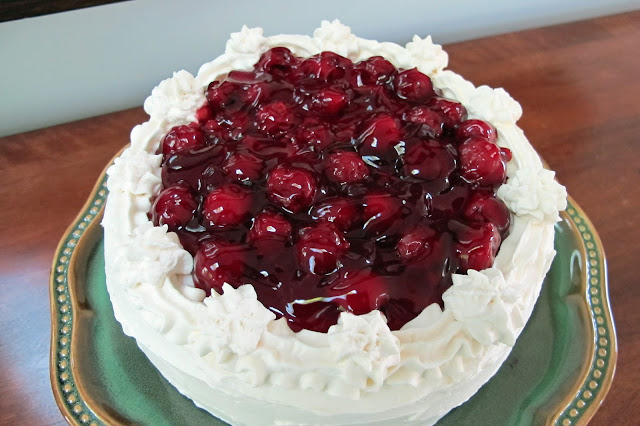 This icing was very easy to pipe, and it kept its shape very well.
I got fancy and added some icing stars...
I resisted putting one more cherry on top.  Such restraint. 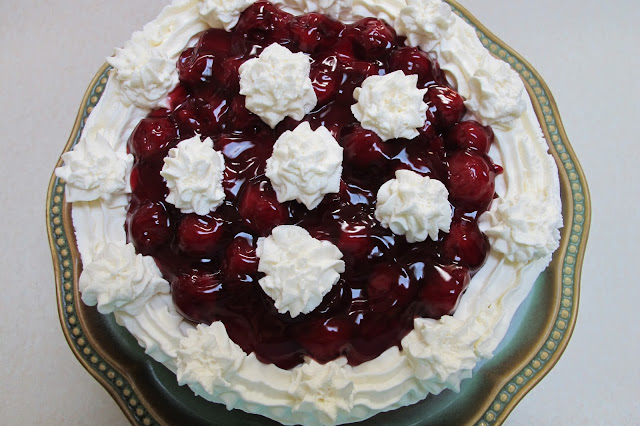 I need some practice at piping, but it turned out pretty well.

I actually made most of this cake yesterday and refrigerated it overnight.
I added the extra frosting and cherries this morning and then popped it back in the refrigerator.
Again, my internet "Research" told me this cake would taste better the next day,
and if it's on the internet, you just know it's true!  ;^)

I could only take a quick snapshot as it was being cut and served... 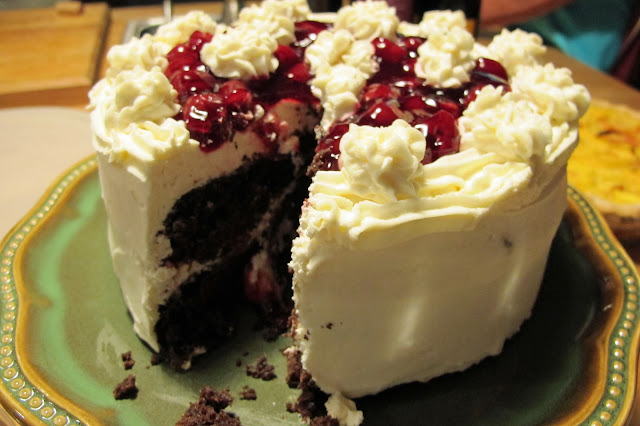 Because we devoured it
and it got rave reviews....

I will put this one in the recipe box and will most definitely make it again.

And if you want to have some fun looking at cakes made by supposed "professionals",
check out this link to Cake Wrecks.com.
It's hilarious.
You won't believe what passes for cake decorating!!!

Linking to:
Wow Us Wednesdays at Savvy Southern Style
Treasure Hunt Thursdays at From My Front Porch to Yours