Fabulous Kitchen Remodeling Project * Before and After!

This past year, I had the pleasure of working with the delightful Park family
on the design for their kitchen remodeling project.
This kitchen was recently featured on the  Bridge Communities 2011 Glen Ellyn Kitchen Walk.
The changes were quite extensive and the results are pretty fabulous! (Toot!)
It helps when you have a client with exquisite taste!

This vintage Colonial had been remodeled by former owners to add some modern features and additional square footage, but the original kitchen remained tiny and out of scale with the rest of the home.
Here is a Before picture of the kitchen.
(Actually this is part of the former family/dining room which became the new kitchen)
The former kitchen became the new butler's pantry, as you will see later... 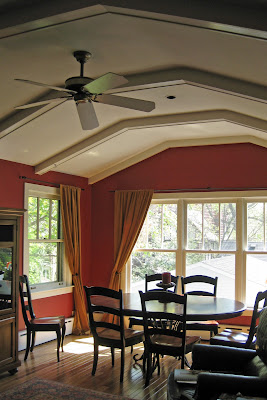 Here is an After picture of the same wall, now part of the spacious new kitchen.
Love, love, love how the new windows and vaulted ceiling design turned out!
The contractor, Doug Funk,  (DFunk@spenglerhomes.com) did a fantastic job
of interpreting our vision for this space. 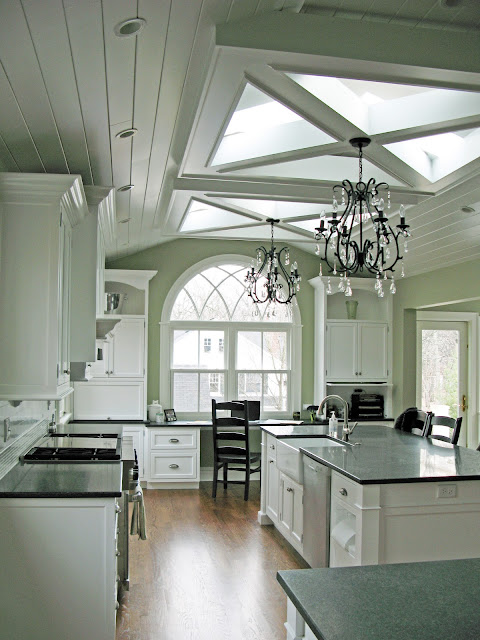 The cabinetry was provided by Peggy Udelhofen of Design Systems in Glen Ellyn.
Gorgeous!

Here's another Before picture of the opposite wall,
looking into the former kitchen from the former family room. 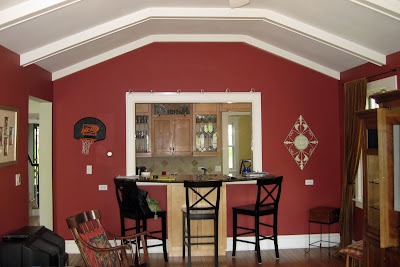 Here is the former kitchen, destined to become the new Butler's Pantry: 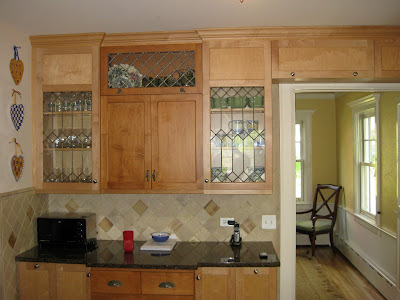 And here is an After picture of the same wall- taken from the new kitchen,
looking through the new butler's pantry to the elegant dining room just beyond it.
Most of the red wall above was removed.
In my dreams, I finally find a way to create a butler's pantry in my own home... 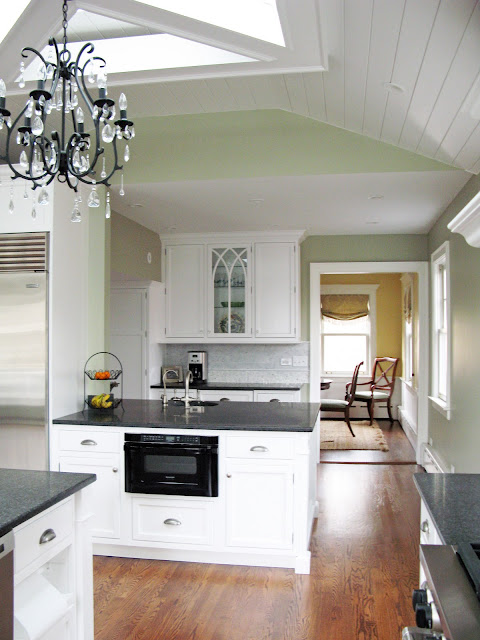 Here is a Before picture of the wall which now houses the new commercial range and hood... 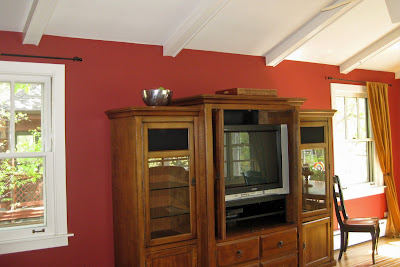 And here is the same wall, showing the new range and hood.
Love the chandeliers, too! 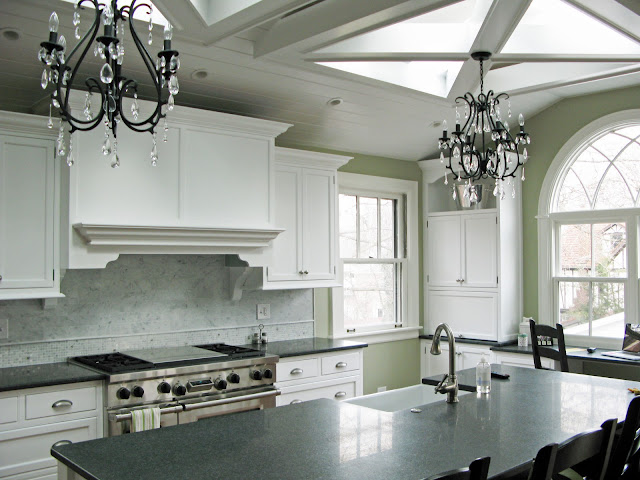 Walls were removed, floors were leveled and the former screened porch was incorporated into the kitchen to create a bright and charming dining nook.
Here is a Before picture of the porch: 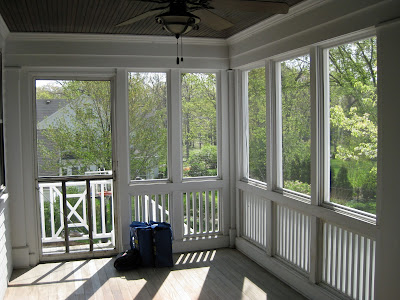 And here is the same porch, transformed into the new dining nook: 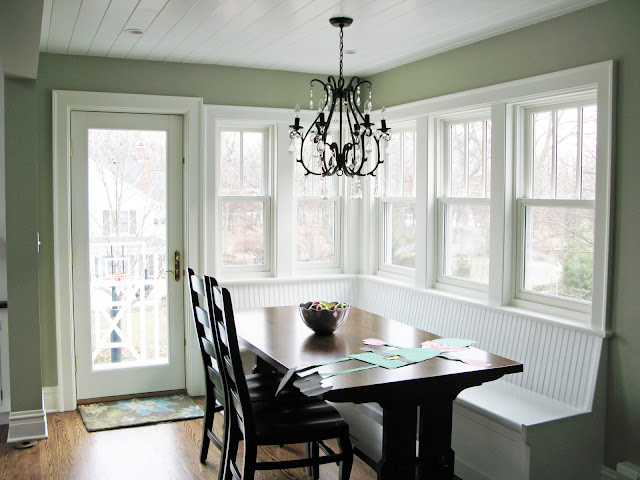 Here is an After picture which shows how the new dining nook is nestled into the new kitchen:
Kudos to Doug for the seamless transition! 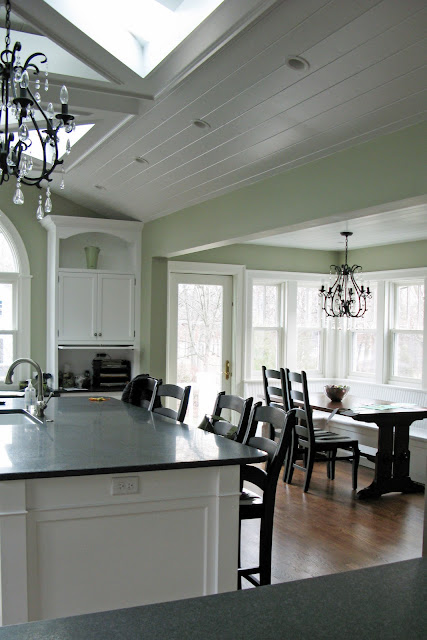 Here is a Before picture of the old kitchen, showing the main design constraint we faced -
the ceiling is lower here due to the staircase above it. 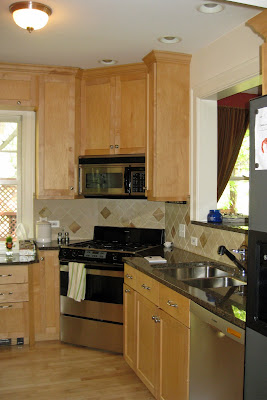 Here is a picture of the same view, with a new china cabinet built into the new butler's pantry where the refrigerator used to be (just visible on the right edge of the photo above).
We decided to create a focal point that is visible from the front entry.
We modeled the mullions here after the new kitchen window, which is modeled after the original and  truly wonderful window that dazzles you from the top of the staircase as you enter this elegant colonial home. 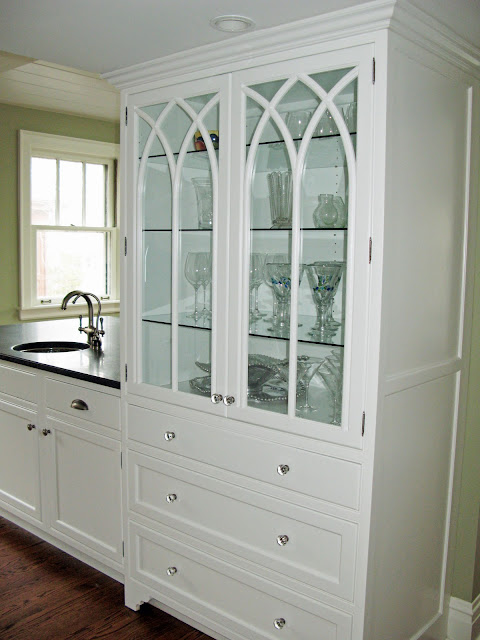 Did I mention that the owner has exquisite taste?