*Before and After * Operation Salvage Entertainment Unit

Here comes another Before and After!  We had a dilemma.  We had a very old (22 years!) Sony TV that was bulky and outdated electronically.  We had a custom entertainment unit that I had designed for this space way back in the late 80's - it housed the TV with hideaway doors that could be closed so we could pretend there was not a gigantic TV in there.  And there were open shelves on either side intended for the tasteful display of cherished things.  Over the years, technology changed, the TV became obsolete (although still working like new...) and the shelves may have become slightly over filled...  It was time.  Mr. Grand was in dire need of a big flat screen TV- for watching football, Pawn Stars and other delights.  I was up for the challenge, because, as you may know, I have Ed!  Ed can do anything!  I call him Dr. Ed in this post because he was required to operate on our entertainment unit.  Happy to report that the surgery was a success and the patient is doing beautifully!  Look---

You would never know there was a giant TV hiding behind these doors, would you?
Before: 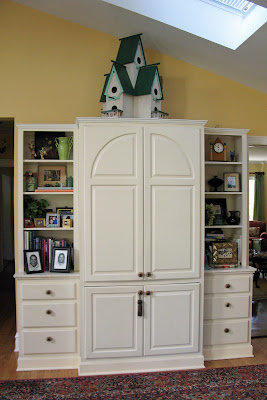 And when open, as it was most days, it looked even more elegant...
Proof that more is not always "More". 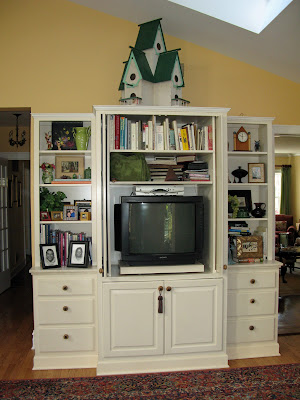 Mr. Grand brought home a 55" flat screen number that we assured him was not too large.
And Dr. Ed began preparations for the cabinet surgery.
First, the bookcases on the sides were removed. 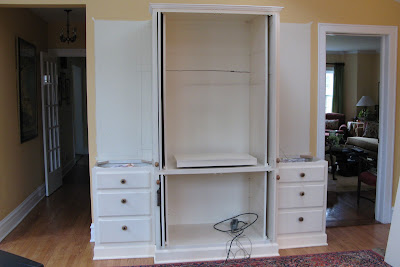 And then, the bone saw came out. 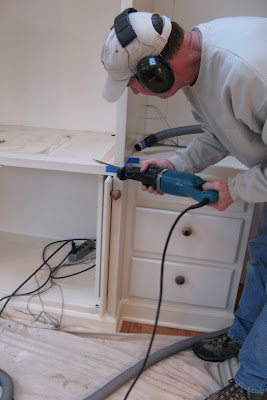 With the center section successfully removed, 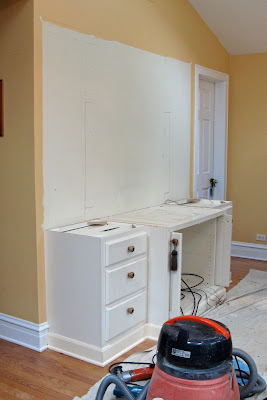 it was time for the reconstruction phase.

Here is the new 55" TV.
Wow.
And the gorgeous new wood counter top handcrafted by Ed. 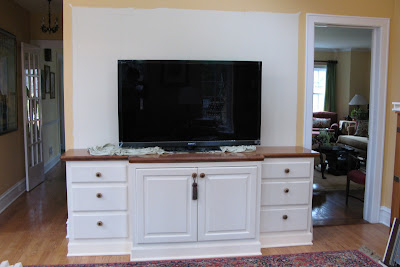 Amazingly big.  Possibly too big?
As I looked around our house, I realized it was the largest item in the entire house.
Seriously.

A dilemma.  Granted, it was a "First World Dilemma", as my daughter likes to point out.  So not a real problem in terms of world poverty or hunger, but a design dilemma and in need of a solution.

Possibilities:
The book cases could be eliminated (Nooooooo!!!!!)
I did not like the side view of the TV with out bookcases..
Even if we hung the TV on the wall, there would be gaps and wires and I'm not a fan of the "TV as shrine" look anyway. 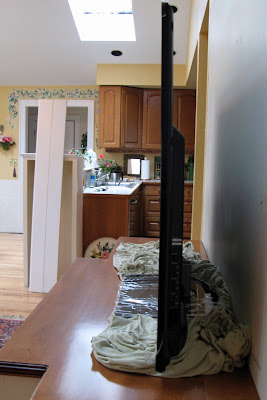 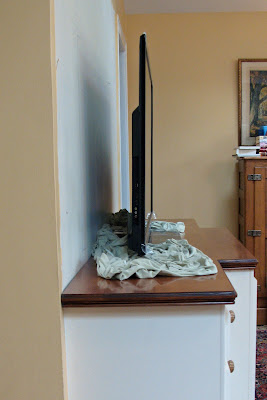 Or, as planned, we could cut down the bookcases so the TV would fit in between them.
Once I saw the new TV on the wall I was not a fan of that idea, either...
They would be too skinny - out of proportion and practically useless for display.
What to do? 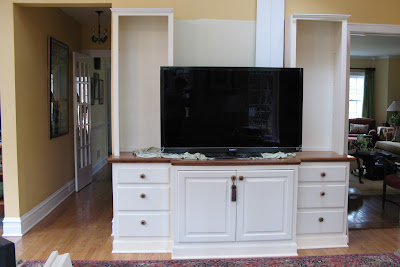 We debated for an evening while Ed rested from the rigors of the days' operation.
Then we went back to Costco and bought another TV -
this time, a 46" TV that seems plenty big enough to me...

Here it is with the bookcases on the sides, a whole new open shelf across the top
and the V-Groove paneling installed.
Have I mentioned that I Love V-groove paneling?  Well, I do.
I love it on the walls, inside cabinets, on the ceiling, for a backsplash, you name it, I would put V-groove there.  So, this was a golden opportunity: 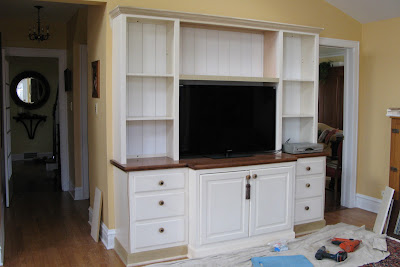 Voila!
The 46" TV looks plenty big to us...
A bit of new, larger crown moulding, some new base moulding and we are good to go!
Did you notice- Ed works so neatly that the tassel hanging from the lower door was never moved???

Here is the painted and oh, so sparingly (for me!) and artfully arranged After version: 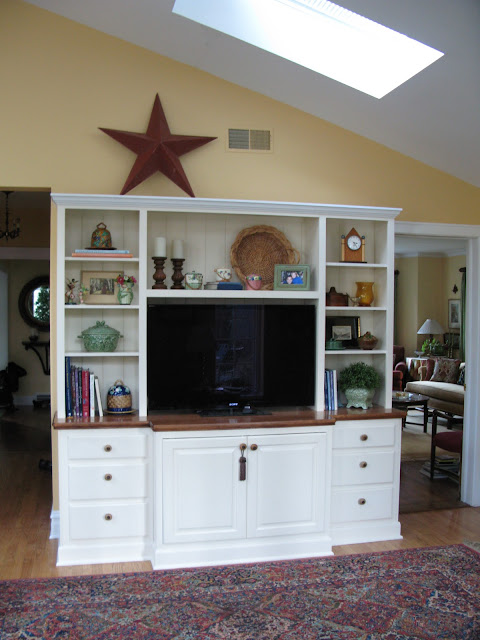 I know, I know, still a lot of stuff on those shelves, but I can't help myself.

Here is the Before again for comparison: 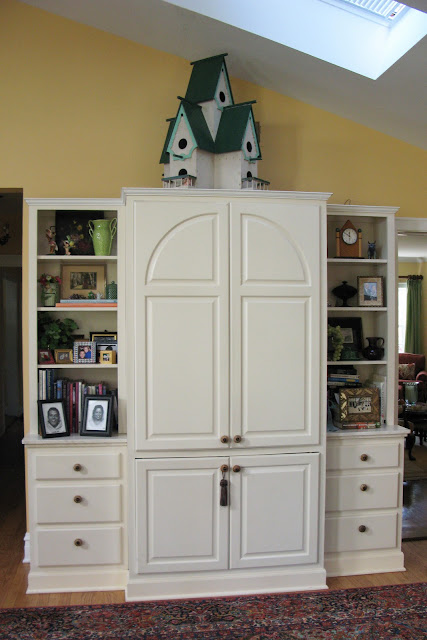 It really makes the whole room seem bigger.
Here is a side view of the cabinetry Before: 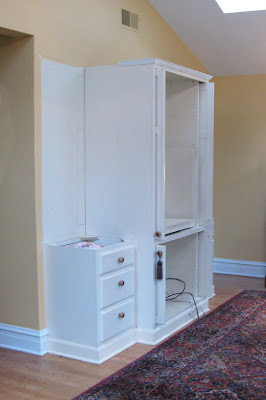 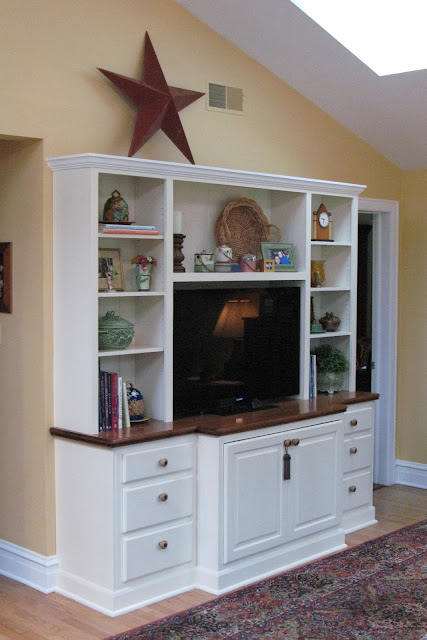 We love it!
And I have made a vow to try and keep from ever over-stuffing it again.
Wish me luck.

Oh, and by the way, since the new cabinetry is only half as deep as before,
we now have a
GIANT BIRDHOUSE FOR SALE! 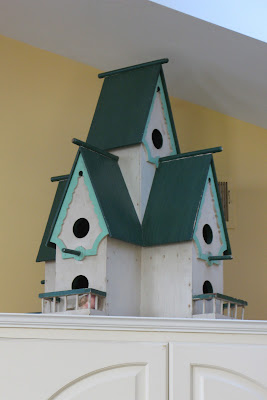