Warning! This will be a different kind of post today...
It's January, it's snowy and gray and I am at home, feeling a bit reflective.
Just about this time every year,
I get to where I can't stand the sight of outdoor Christmas decorations anymore....
Especially you, you tired red velvet ribbons, billowing in the cold January wind-
you must be removed, and now!
No waiting til February under the guise of
"Oh, I'm here for Valentines Day!"
Nope, you all have to go.
The only exception I make is for my little red boots. 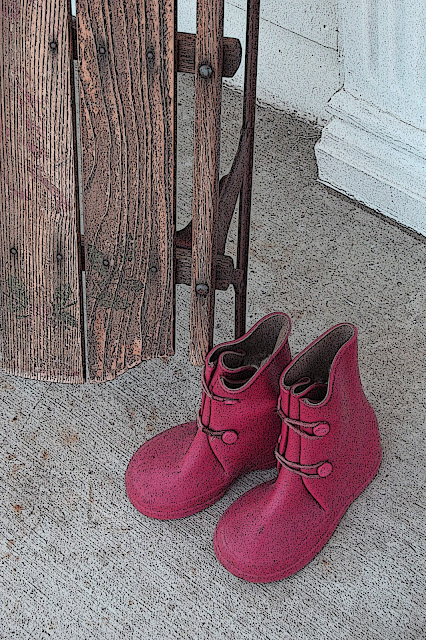 Raise your hand if you wore a pair of these when you were little.
Don't worry, no one can see you and know how old you are!  We all had them!
I may have found these boots at the flea market, but I believe they were actually mine!
They called to me and the feeling of deja vu was so strong,
I just knew they must have been my very own pair, once upon a time.
I remember the feeling of tugging the rubber loops around the buttons
and the way they opened up to fit over my saddle shoes.
I brought them home and now, every Christmas season, I put them out on my front porch
along with this wonderful old, faded Flyer wooden sled given to me by my Mom
when my son was very small.
This little vignette works for Christmas and even though the boots are red,
I leave them out til the snow melts.
Have you ever had that kind of emotional reaction to an antique or a vintage treasure?
To me, it was very real and very evocative of my childhood.
I'm sure it's one of the reasons I love to seek out vintage things and bring them home.
They have a patina, a sense of history, a soul? - that you can only wonder or marvel about.
It has happened to me two other times.
One of them was was wonderful and the other kind of creepy.
I'll tell you about the creepy time first, so I can end on a grand note!
When we were young and just starting out in Milwaukee, we were always on the lookout (now you know this was really just me, but Mr. Grand would often come along because he was a good sport) for
antiques that we could use to furnish our house with.  One Sunday afternoon, we found a dining room set in a musty, dark antique warehouse on the south side and I couldn't wait to get it home to see how it would look in our empty dining room.  We set it up and we were pleased - it needed some work and the cushions would have to be recovered, but it would do.
Later that evening, after Mr. Grand had gone to bed, I decided to walk through the dining room once more, to congratulate myself on my amazing find.  Rather than the warm, wonderful feeling I expected, I was chilled by the overwhelming sense that something evil, something literally, truly evil had happened around this table. I have been antiquing all my life - at my mother's side since I could walk, and I have never, ever had a feeling like this before.
I couldn't shake it and I didn't know what to do.  Could it be haunted?  Do things have souls?
I didn't know and I couldn't sleep.  I wanted it out of the house!
Mr. Grand, always the more rational of the two of us, suggested we have it dipped and stripped.
Wanting it out of the house asap, I agreed.  When it was refinished, I dreaded bringing it back home, but I agreed to give it a try.  And.... nothing.  It was completely fine.
It's like it was somehow cleansed or baptized.  It was a mystery.
We used that table for 10 years, we hosted lots of friends and celebrations around it
and I never had another moment of unease. Hmmm.
The next time I had a profound deja vu experience was at the flea market, too.  About 10 years ago, I came across some unusual square china plates that were so familiar and so instantly dear to me that I had to buy them.  I wasn't sure why they seemed so familiar so I asked my Mom about them - they are marked Johnson Brothers, in the Rose Chintz pattern. She knew the pattern immediately.
It was the pattern of my Grandmother Evie's china (on my dad's side).
My Grandmother Evie had died many years ago in Chicago and my Grandfather had remarried.
Any family heirlooms from that side of the family went to his second wife's family when my Grandfather died and we never saw any of it again.  Or so we thought.  I grew up on the east coast. They lived in Chicago.  I now live in Chicago.  The flea market was in the Chicago area.
I think she was sending it to me.  I really do.
I loved my Grandma Evie and I have wonderful memories
of visiting them in their cozy Chicago brick bungalow.
This is a picture of my grandparents, probably when they were "courting"... 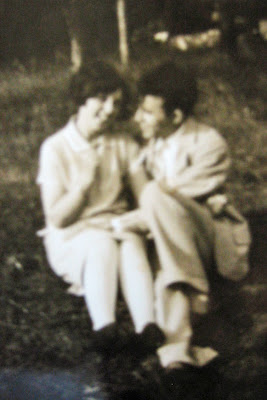 I can't remember too much about her really, but that she was Irish and feisty and she was very protective of me.  I can still hear her growling "I'll ring his neck!" after some boy (probably one of my five brothers!) had been teasing me beyond endurance.
This is me, in between my two older brothers, in front of my grandparents house in Chicago.
Hard to believe those two cherubic boys could be soooo mean... 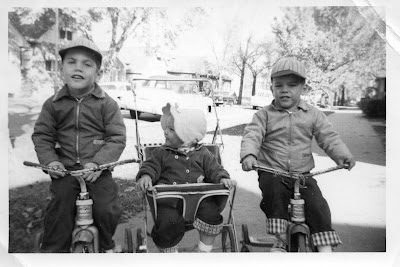 Some memory buried deeply in my mind must have recognized the china at the flea market and stirred the deja vu spirits again.  I decided to collect the china whenever I found it in the Chicago area, to honor my Grandmother Evie and because I love the pattern!
Here's a picture of the Johnson Brothers Rose Chintz square plates: 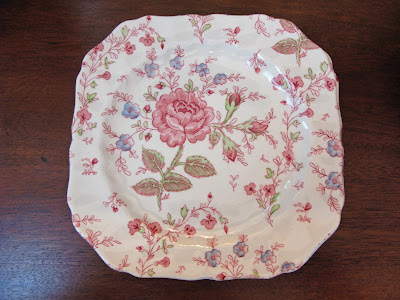 There are also wonderful little berry bowls that I've added to the collection. 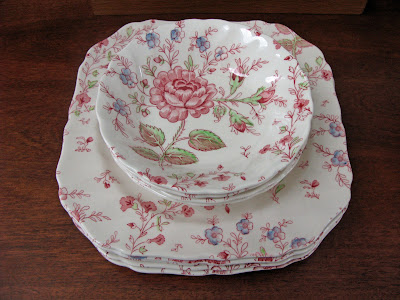 And a pretty creamer, among other charming things. 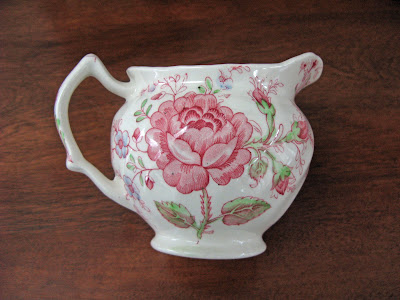 Here's a close up of this sweet pattern. 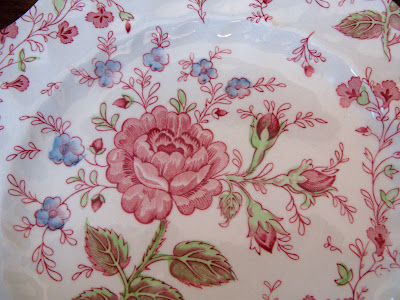 They still make it, but the new stuff is not as delicate or detailed as the vintage pieces.  I don't know how much of it Grandma Evie had, or when she will stop sending it to me, so I still pick it up if it's old and the price is right.  I think she would want me to!